What does a Jeremy Corbyn led Labour opposition mean for Ireland?

ON  Saturday, September 12 Jeremy Corbyn was appointed the new leader of the Labour party. It marked the end of a leadership contest which has divided the party over the summer.

Originally an outside bet, Corbyn's campaign galvanised the marginalised left of the party and captured the imagination of many of those disillusioned with modern politics. This resulted in a landslide win for the 66 year old, who secured 59.5% of the vote.

The former backbencher had lived a life of relative obscurity for a politician, being most well known for his beard and diminutive expenses claims.

Jeremy Corbyn was born in Wiltshire, the son of an electrical engineer and a maths teacher. After leaving school, he spent two years overseas in Jamaica doing voluntary work. He returned to London to study briefly at the North London Polytechnic, although he never completed his degree.

His career in politics began in 1974, when he was elected to Haringey council, a series of minor political roles followed until he was elected as MP for Islington North in 1983, a role he has held ever since.

Who are his friends?

One of the first people to congratulate Jeremy Corbyn, following the announcement was Sinn Féin President Gerry Adams. Adams wished him well done on Twitter almost straight away. The pair have often been photographed together throughout the years, in July this year Adams tweeted a picture of them sharing a table in Portcullis house.

In a statement Adams said:

“I have known Jeremy for many years. He is a good friend of Ireland and of the Irish peace process. I wish him well in his new and challenging role as leader of the British Labour Party and look forward to working with him in the time ahead to ensure that the gains of the peace process are built upon.”

John McDonnell was Corbyn's campaign manger throughout the leadership race, having previous run twice himself. Long time friends, Corbyn has rewarded him with the role of Shadow Chancellor. Critics have suggested the role should have been awarded to the more experienced Angela Eagle.

McDonnell set out his financial vision for a Corbyn opposition in a blog he posted back in August:

“Politicians have patronised and talked down to us all when it comes to our economy, but ordinary working people have to manage on incomes significantly lower than the likes of George Osborne and his friends in the City. They could teach the bankers and many commentators a thing or two about managing a budget responsibly.”

In 2013 he controversially called for the bravery of IRA soldiers to be honoured:

“It's about time we started honouring those people involved in the armed struggle. It was the bombs and bullets and sacrifice mad by the likes of Bobby Sands that brought Britain to the negotiating table.”

Corbyn has remained a staunch supporter of a United Ireland. He has been criticised by fellow MPs both within Labour and beyond, for holding meetings with former IRA members in the Houses of Parliament. He voted against the Anglo-Irish agreement in 1985 as he felt it strengthened the border, between the North and the Republic.

In August of this year Corbyn was questioned on Ulster Radio's Steven Nolan show about his views on the IRA. Corbyn strongly condemned the bombing campaign, yet refused to be drawn further.

“I condemn all bombing, it is not a good idea, and it is terrible what happened.”

He did however, go on to question British treatment of IRA prisoners and the British Army's role in Bloody Sunday, but ultimately acknowledged his support for the peace process.

“Well in a sense the treatment of IRA prisoners which made them into virtual political prisoners suggested that the British government and the State saw some kind of almost equivalency.”

“I mean my point is that the whole violence was terrible, was appalling, and came out of a process that had been allowed to fester in Northern Ireland for a very long time and surely we can move on a bit and look towards the achievements of the peace process in moving things forward.”

The Irish on Corbyn

The new Labour leader is expected to receive a warm response from the Irish community with Dr Mary Tilki chair of Irish in Britain saying:

“Labour Party members many of whom are likely to be Irish have given a strong signal of the need for change in Labour Party policies. Jeremy Corbyn and John McDonnell have long been friends of the Irish community even at times when it was not popular to be so.”

Talking to The Irish Post she continued: “We are happy to work with all of Jeremy Corbyn’s team on issues affecting our community.” 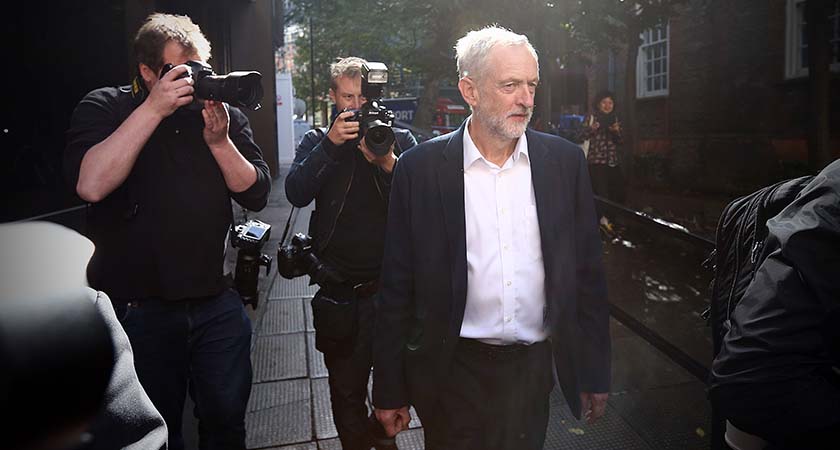 Corbyn will hope to appease female backers with a female majority shadow cabinet, the first in opposition history. He is also likely to impress supporters by creating a shadow Cabinet position for mental health, a job which has gone to Luciana Berger MP for Liverpool Wavertree.

Vernon Coaker has been returned to his former role of Secretary of state for Northern Ireland, a position he held from October 2011 until October 2013.  Coaker a former teacher was elected as MP for Geding in 1997, the first ever Labour MP to win the seat. He has been shadow Defence Secretary since October 2013

It could be that with everything going on in Northern Irish politics Corbyn is plumping for a minister with some experience under his belt.

Corbyn, much against the advice of political pundits has given the position to friend and supporter John McDonnell. For many, he may seem a strange choice as shadow chancellor, most often in the news as a campaigning MP, he has no front bench experience.

At present McDonell chairs Public Services Not Private Profit, a campaign group backed by 16 unions that calls for a renationalisation of services. Seen as a hard line left-winger, he is unlikely to prove popular with the city.

As one of six children McCarthy could bring some much needed diplomacy to the new cabinet.  Elected as MP for Bristol East in 2005, McCarthy is a former solicitor, who studied, Russian, Politics and Linguistics at Liverpool University.

She has the distinction of being the first vegan MP in the houses of parliament, and is also a member of the Labour Animal Welfare society. It remains to be seen how this will impact her decisions on rural affairs.