Formerly a rower competing for Great Britain, she has been part of the Irish paracycling team since 2011.

This summer she won gold and silver in the Rio Olympics competing with her pilot Eve McCrystal.

2016 was a successful year for the duo, winning gold in both time trial and road race events in the Para-Cycling Road World Cup.

When she was 11 Dunlevy was diagnosed with a chronic hereditary eye disease which causes abnormalities of the retina leading to progressive vision loss.

Finding mainstream school difficult she changed school, she quickly got involved in sports and despite previous adversity it turned out that she had a natural ability.

When she was younger she participated in a variety of sports but it wasn’t until university that she discovered a love of rowing.

As a teenager, Katie won national swimming and athletics competitions, she competed at the International Blind Sports Associations European Athletics Championships where she won bronze in the 400m at the age of 17.

She was noticed in the world of rowing and was fast tracked into the Great Britain team.

Katie, now 35, competed for seven years in rowing, becoming World Champion for Great Britain in 2004 and again in 2005.

In a multi-sports camp while trialing for the Irish boat in 2011 she was approached by the head coach of para cycling and urged to give it a try.

While her ambition was to compete at London 2012 in rowing she was intrigued by the prospect of cycling. 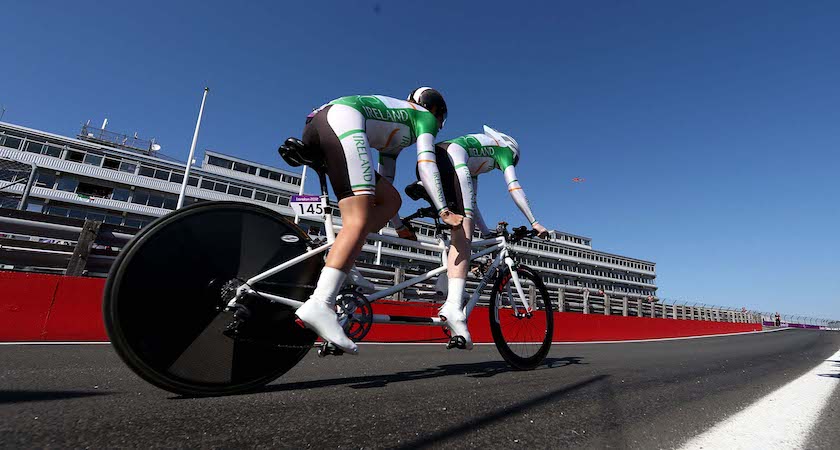 Katie was convinced to go to Dublin and meet with the coach for fitness testing.

Three weeks later she was asked to represent Ireland at the Road World Championships.

Having never ridden tandem before she had only a short time to learn the skill, with her then partner Louise Moriarty.

After competing at the Championships in Denmark she fell in love with the sport, quickly realising that she could go far in cycling.  She left rowing behind and focused on her goal of cycling in the Paralympics.

While having a lot of success with team GB, her Irish roots qualified the Crawley woman to change allegiance to Ireland's cycling team.

Katie’s dad was born in a small village in Donegal, and Dunlevy spent family holidays there with her five sisters.

Katie first paired up with her partner Eve McCrystal in 2014 in Mexico and to add to a great first year together they became Irish National tandem time trial champions that June.

Their partnership achieved the ultimate goal when the won gold in Rio at this year’s Olympics. The pair finished 33 seconds ahead of Japan’s team. 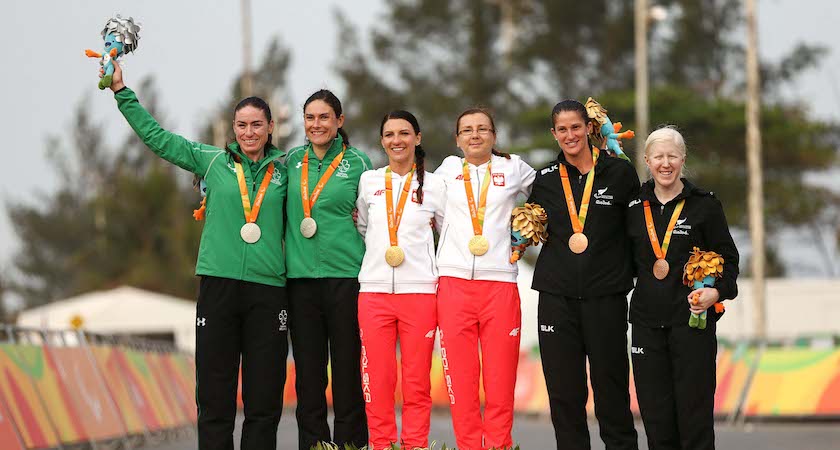 Evelyn McCrystal and Katie-George Dunlevy of Ireland on the podium at the Rio 2016 Paralympic Games. (Picture: Hagen Hopkins/Getty Images for the New Zealand Paralympic Committee)

The success of Team Ireland at the Rio 2016 Paralympic Games was honoured at a Gala Awards ceremony in Dublin on December, where Katie-George Dunlevy claimed the Outstanding Female Award.

Tonight RTÉ will announce which of the the 12 nominees for its Sportsperson of the Year Award will take home the coveted prize, with both Dunlevy and McCrystal as contenders.

The annual awards ceremony takes place this evening, December 17, as Ireland’s sporting elite are recognised for their achievements over the past year.

Though perhaps the less well-known on the list, their achievements are every bit as noteworthy as their competitors.

If they were to come out victorious it would certainly round off an impressive and memorable year.