The London Eye (L) is lit up in the colour green in celebration of St Patrick's Day, in central London, on March 17, 2011. Meanwhile half a million revellers thronged Dublin, Ireland for the main St Patrick's Day parade on Thursday in a bid to banish their austerity gloom as US President Barack Obama announced he would visit Ireland in May. AFP PHOTO/CARL COURT (Photo credit should read CARL COURT/AFP/Getty Images)

A HOST of iconic buildings and landmarks around the world will go green for St Patrick’s Day this year.

The Colosseum in Rome, the Leaning Tower of Pisa, the Sacré-Cœur Basilica in Paris, the Christ the Redeemer statue in Rio de Janeiro and Nelson’s Column in London will take on an emerald hue in honour of Ireland’s patron saint, Tourism Ireland revealed as it launched its seventh annual Global Greening initiative.

New ‘greenings’ for 2016 will include 7 World Trade Center at Ground Zero in New York, the famous Big Wheel on Place de la Concorde in Paris, Mole Antonelliana in Turin, the light rail system in Addis Ababa and City Hall in Tel Aviv. 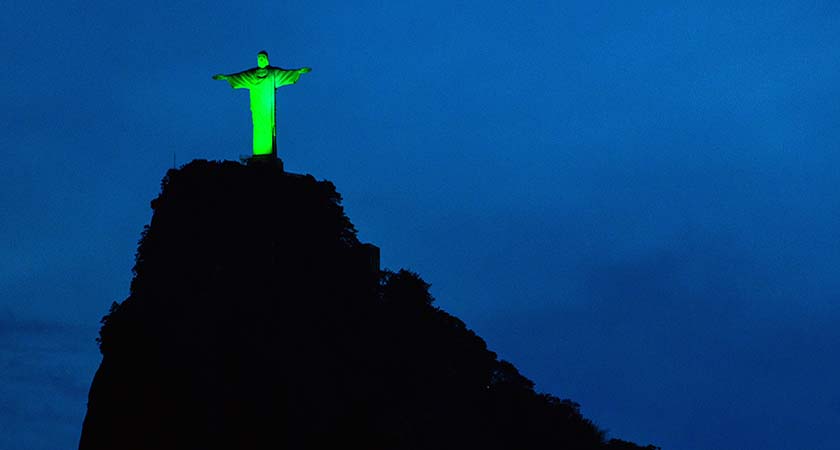 View of the statue of Christ the Redeemer illuminated in green to celebrate St Patrick's Day (Photo: Getty Images)

The Boston Red Sox baseball team will also wear green jerseys on St Patrick’s Day, for their spring training game in Florida. And their home ground, Fenway Park in Boston, will join in the fun with the inside of the ballpark, the scoreboards and the ‘Green Monster’ — its high left field wall — all set to be illuminated in green.

The new sites will join some old favourites which have gone green in previous years, including the Little Mermaid in Copenhagen, the ‘Welcome’ sign in Las Vegas, the Allianz Arena in Munich, the Empire State Building in New York and the Sky Tower in Auckland.