KEITH DUFFY has broken his social media silence to lift the lid on the mystery illness that saw him sidelined from Boyzone’s 25th anniversary tour.

The 44-year-old was forced to pull out of a gig in Bangkok last week after being rushed to hospital in Thailand, where he was kept overnight.

"Keith was taken ill before the gig here in Bangkok this evening and has been admitted to hospital on the advice of the local medical team.,” a statement on the Boyzone Instagram account read.

"Our brother will be back on his feet as soon as possible and we thank you for all your wonderful support in the meantime."

Now Duffy has returned to social media to shed some light on the illness that saw him miss the gig – and it makes for grim reading.

Posting a picture of himself on Instagram alongside the four nurses that helped him get back to full health, the Donaghmede-born star described in alarming detail “the worst bad health experience of my life”.

“72 hours of a fever of 38/40 degrees,” he wrote. “With Diarrhea and Vomiting caused by contaminated food from bad hygiene in preparation!!”

“A secondary bowel infection and viral infection,” he added. 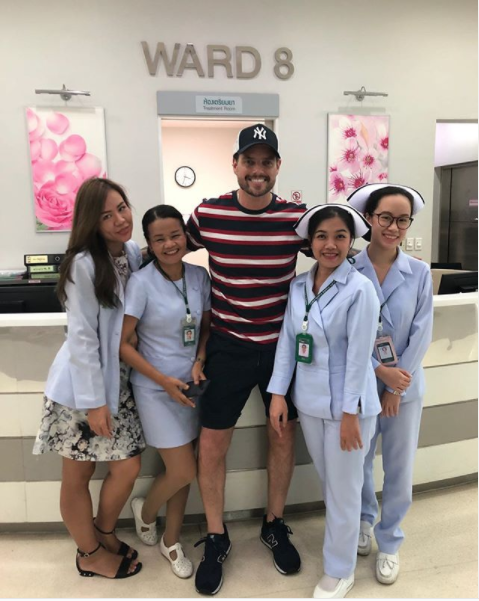 Despite the unfortunate circumstances surrounding his stay in the Bangkok hospital, Duffy was keen to praise the nurses and doctors that treated him.

“These ladies our my savior[sic],” he said.

“They are saints Thank you ladies I love you! You’ve Given me a whole new perspective of selflessness I will never forget! God bless you all and thank you again! World medical hospital”.

Duffy is now set to rejoin the rest of Boyzone having also missed gigs in Australia.