LONDON remain without a win in Division 4 but held their own for large periods against league leaders Antrim at the Irish TV Grounds in Ruislip on Sunday.

Kevin O'Boyle's fourth-minute goal cancelled out two early points from London duo Eoin Murray and Adrian Moyles, and it would prove to be the difference as the Saffrons ended up 1-11 to 0-11 victors.

London battled hard from start to finish in what was a physical encounter, with James Moran and Mark Gottsche giving as good as they got amid a fierce midfield battle with former Exile Sean McVeigh and Conor Murray.

Antrim took a one-point lead into the break, with Tomas McCann contributing three first-half scores as the visitors led 1-5 to 0-7, but the Exiles re-emerged for the restart determined to reclaim the lead.

They achieved that aim nine minutes into the second-half as Lorcan Mulvey began to throw his weight around and find the target, but London's lack of discipline disrupted their flow and Antrim pounced.

Two London substitutes – Cormac Coyne and Adrian Hanlon – lasted a matter of minutes after coming on, much to the frustration of Exiles boss Ciaran Deely, while key forward Adrian Moyles also received a black card.

The visitors soon punished London by upping their intensity and aggression, and James Laverty pulled the sides level for the third time in the match with a fisted point on 53 minutes, before a brace of points from Conor Murray put Antrim in control.

The free-roaming O'Boyle added a point to his early goal to put the Saffrons three points in the clear, but Mulvey reduced the deficit back to two by finishing off a fine team move from London.

Substitute Ryan Murray had registered a couple of wides after replacing the black carded Patrick McBride, but he soon found his range with a delightful point from wide right, which would prove to be the final score of an enthralling encounter.

London scrambled the ball forward for a one last dash in search of a draw, but Dualtach Molloy's goal-bound effort was easily saved by St Galls man Chris Kerr in the Antrim goal.

Deely was pleased with his side's response to getting hammered by 23 points away to his native Wexford in their previous outing, and took solace from a narrow defeat to what he believes is the best side in Division 4.

“All week we spoke about the hurt from last weekend [the heavy defeat to Wexford] and we were very focussed this weekend. We were looking for a big performance, to win our individual battles and see where that took us.

“We've worked a lot on our shooting, fitness and our tackling in the last few weeks. We didn't see that in the Wexford game, which was disappointing, but today we saw the results of some of that work.

“It's very disappointing again to concede an early goal because we had them rattled a little bit at the beginning, but then Antrim settled in after the goal. I don't think there's anything systematic back there, it's just happens when you're playing against quality opposition.”

London were missing some players and although he was happy with the performances of those who came into the side, Deely stressed the importance of players making themselves available. 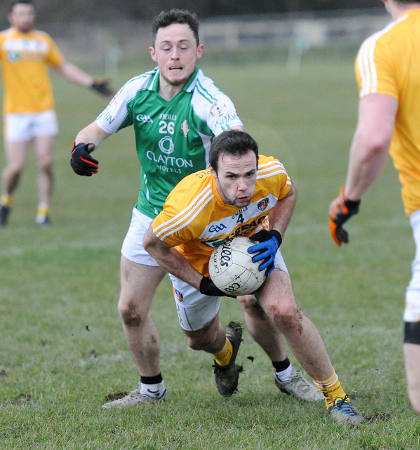 “Everyone who started today did very well,” he said. “That's what you have the squad for. London is a little bit different, you have lads away which for other counties just wouldn't happen. Maybe that's something we need to look to change, this culture in London.”

Regular black cards have been a theme for London so far this season, and although Deely was unable to see any infringements, he admitted it is frustrating having to replace substitutes, namely Hanlon and Coyne, who lasted barely a minute into his London debut off the bench.

“Adrian Hanlon was coming in could have had a big impact on the game – he's a very good ball carrier,” said Deely. “I didn't see either incident so I don't know exactly what happened, and it was the same for Cormac Coyne. That was his first game coming in for London, so it's a little bit frustrating, but I think they were just a little bit pumped up.”

Up next for London is the visit of Leitrim next Sunday and after their impressive defeat of Louth, Deely is merely hoping the Exiles can maintain consistency and be competitive.

“We'll set up as best we can,” he said. “We'll have a couple of players back from being away and then we've got a couple of lads with injuries who may be back. But I've said it all along with this London team – we need to develop more consistency between performances, so we hope to compete against Leitrim.”

Reflecting on the game, Saffrons boss Frank Fitzsimmons declared himself pleased to come away from Ruislip with two points, but he was adamant the threat London possessed did not come as a shock.

“Coming over here is never easy, some of the boys were getting up at 4.30 in the morning to get flights - it's an awkward place to come,” he said. “So I'm happy enough to come away from here with the two points.

“Fair play to London, they played very well, stuck to their guns and were very physical. But our lads dug in for the last 15 minutes and showed a bit more fitness and a bit more experience.”

With the likes of Ryan Murray and Martin Johnson making a solid impact off the bench, Fitzsimmons hailed the strength of his squad.

“This panel has been fantastic for us, it was our panel that won that game for us today, not the 15 starters. We have a very strong panel this year and have plenty of players who can come in and make a massive, massive difference.”

Man of the match: Tomas McCann (Antrim). The Cargin half-forward was deadly from frees and chipped in with a nice score from play too.

Score of the match: Lorcan Mulvey put the finishing touch on a point to cap a fine London move involving three other players deep in the second-half.