LANCASHIRE and Yorkshire once did battle in ‘The Wars of the Roses’ beginning in 1455 and lasting until 1487.

There were savage clashes throughout the country to see who would claim victory. This encounter, however, between the two on a sun-drenched Sunday in Manchester, did not have the same ‘bite’.

The gulf in class was similar to a club game in Ireland if a senior team happened to come up against a junior team. This is not a fair reflection of the football in Yorkshire, they possess some fantastic players and the exclusion of the Newcastle contingent of Cu Chulainns was a major blow.

The bottom line, however, which has to be addressed by every county team in Britain, is that county football preparation is terrible. There is minimal effort being put into it and it is not seen as an honour to don the county jersey, which is a huge shame.

Lancashire led from start to finish and did not take their foot off the pedal until the referee blew the final whistle, although resistance offered by Yorkshire was minimal. The ‘Red Roses’ had 13 different scorers and the pick of these came from Michael Molloy.

Molloy, from Donegal, has returned to the scene after taking a year out. He has bulked up immensely but has not lost his speed of turn. He is deceptively quick and when he turns onto that trusted left foot; the result is a forlorn conclusion: he rattled up 1-8 before being replaced for the second-half.

Lancashire had registered three points before Yorkshire got their opening score when their wingback, Conor Houten broke three tackles to fire over. Houten ‘fought the good fight’ all day and he was credited with being the only player in green to score from open play. Lancashire then rattled in two quick goals, the first being a cool finish from Molloy and the second from Colm Conway, who bundled the ball over the line. 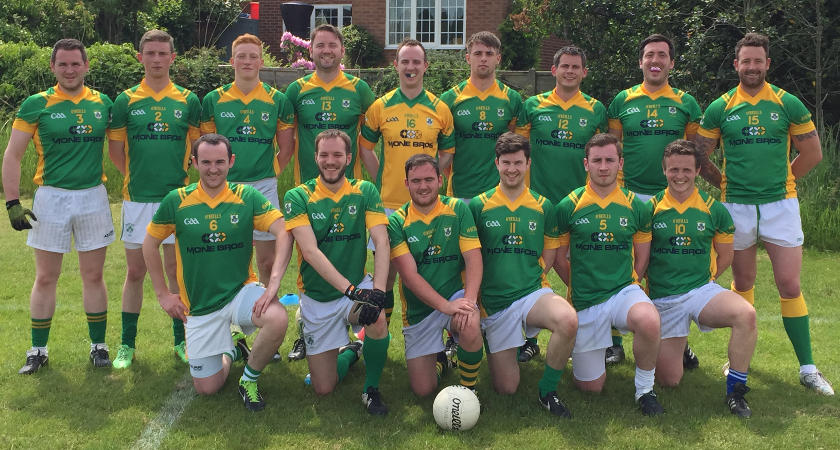 The understrength Yorkshire team [Picture: Cathal Harkin]
The score now read 2-7 to 0-1 and the huge crowd were enjoying the sun much more than the contest. Conor Reid then knocked Yorkshire’s second score of the day from a free.

He and Andy Mullan in midfield were the shining lights in the Yorkshire team as they tried valiantly in the face of adversity all day long. Lancashire would then go on to score ten consecutive times until the half-time whistle, with Conrad Tierney, Ciaran Harper and Tom Grady giving aid to Molloy in the scoring department. The scoreline at half-time read Lancashire 2-17 Yorkshire 0-2.

There was no let-up in the second-half for Yorkshire and it was Groundhog Day all over again. After a couple of opening points by Lancashire; Harper rattled the net for the men in yellow, with a ruthless shot from 21 metres out when a point seemed the obvious option.

Oisins’ Mick Comney, operating from wingback, then scored a brace of goals himself. The remaining points of this non-contest, was spread throughout the Lancashire team, with a John O’Hagan effort from John Mitchels being the pick of them.

O’Hagan rarely gets the chance to operate further up the field, but he showed what he can do when he darted and weaved through the Yorkshire defence to powerfully put the ball over the bar.

It was fitting that this was Lancashire’s last score; while the final score of the game was a free-kick from Yorkshire’s Mullan, who was applauded by all for his effort and persistence. Indeed, many watching believed him to be the stand out player of the game.

Lancashire now will play Warwickshire in a mouth-watering game next weekend at Pairc na hEireann, while Yorkshire must lift themselves for the backdoor. They have some consolation though, as their game against Scotland is in Leeds. 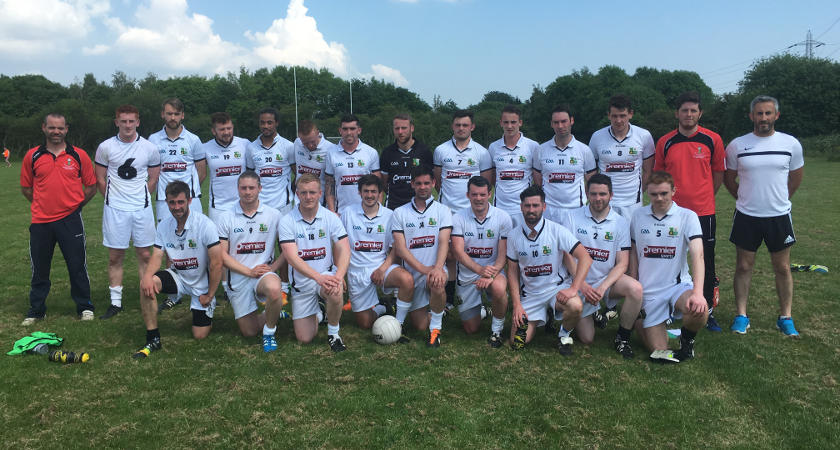 Elsewhere, a late salvo from Scotland kept Warwickshire honest to the very end as they nearly pulled a game from the fire that they had no right to.

This game looked over long before the final whistle, but to be fair to the northerners, they made a real fist of it, although Warwickshire were worthy winners in the end.

The conditions were perfect at the home of Oisins CLG in Manchester on Sunday between two teams who have shown that on their day they can compete with the best.

It was Warwickshire, however, who would settle first and get into their rhythm. James Connolly opened the scoring for Warwickshire through a '45 and this was quickly added to by Brendan Hickey.

In reply, Shane Moran registered Scotland’s first score, but Hickey was on hand to fire over his second score of the game to leave a two-point gap between the teams. Wing-forward for Warwickshire, Edward Blake then scored his only point of the game.

At this stage of the game, it was nip-and-tuck with Warwickshire slightly playing the better football. The next 30 minutes, though, it was all the lilywhites as they took a stranglehold of the game.

Leader in this was Niall Gilbride who was operating things from his anchor at centre-half back, he was ably supported by his midfield. Arguably the most extravagant name ever for a Gaelic footballer, Angelo Cataldo, was chief architect.

In their attack, the Hickey boys of Paddy and Brendan and James McDowell knocked over the scores leading up to half-time where the scoreboard read Warwickshire 0-10 to Scotland's 0-2. This was by no way flattering on behalf of the men in white, in fact it should have been more have it not been some very poor shooting.

There was no respite for Scotland upon the resumption, and this time, it was a major. Michael Harrigan, rattled the net. Eleven points was now the margin and with 30 minutes to go; who knows what the score might end up. It was evident in Scotland’s play that it was damage limitation.

The difference then jumped from 11 to 13 when Patrick Hickey and Ted Duffy registered back-to-back scores. As the scoreline confirms, Scotland scored three goals in this game, and it was in the final third of the contest in which they they got all three.

Shane Moran somehow managed to get the ball over the line and almost immediately Cian Geoghan got another one. Suddenly, the deficient was whittled down to seven points and the game was back on.

Patrick Hickey and Duffy, managed to settle Warwickshire’s nerves to stretch the lead back out and even though a late third goal from Gerard Caden and some late points from Geoghan and Duffy; the game was lost in the opening half.

Scotland go through the backdoor now and must make another long visit south where they play Yorkshire. They should have too much for the Leeds men, while Warwickshire host Lancashire.

This game promises to be a great spectacle and if the weather keeps up; we will be in for a treat.