ON the 25th May 1967 in the Portuguese capital Lisbon, Celtic Football Club defeated Internazionale from Milan 2-1 to become the first club from Britain and from northern Europe to win the European Cup.

By 2019 barely twenty-two clubs had managed to win this most prestigious football trophy.

However, Celtic’s win originated from much more modest and humble beginnings than any other club to achieve this success.

Despite Celtic’s win being reported widely and documented regularly through the years, the overwhelming majority of such discourse has considerably overlooked the magnitude and iconographic significance of this defining socio-cultural moment.  15,000 supporters, mainly from Scotland, but also from amongst the wider Irish descended diaspora in North America and elsewhere, travelled to watch their team in the final.

One popular historian records a revealing but passing comment on how so many of the Celtic support attended the celebration of Catholic Mass on the day of the final. Apart from this reference to Catholic Celtic supporters attending Mass (a few also visited the Marian Shrine at Fatima en route) little of this account distinguishes Celtic’s win from those of other sides from Britain during the following decades.  Despite all the histories about the club’s win, the iconic status claimed and presumed is rarely explored and articulated. That is, the deep and profound impact this victory represents for many Celtic supporters – in Irish ethnic, community and Catholic religious terms: indeed, these are conspicuous by their absence. 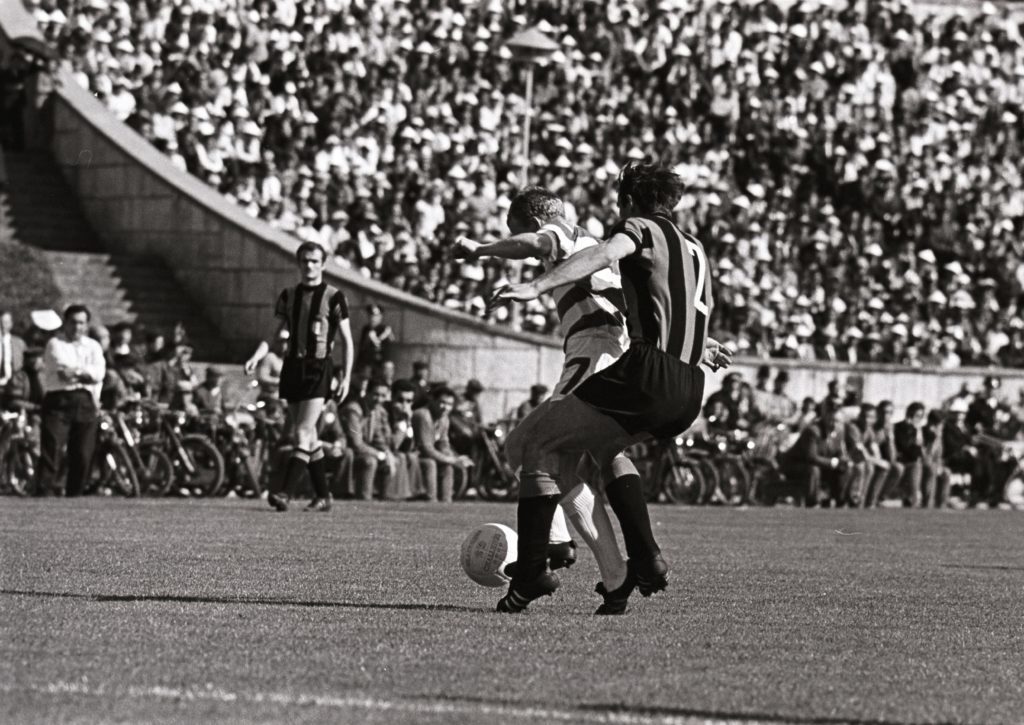 Jimmy Johnstone of Celtic (L) Tarcisio Burgnich of Internazionale (R) during the Europa Cup match between Celtic Glasgow and Inter Milan on May 25, 1967 at Lissabon, Portugal(Photo by VI Images via Getty Images)

However, the iconic nature of the win as a defining moment of socio-cultural significance is reduced to being simply proclaimed as a ‘Scottish victory’ and to being ‘the first British side’ to win the European Cup.

Nevertheless, from the embers of colonialism, mass starvation and Irish immigration from Ireland to Scotland flickered the flame of a diaspora negotiating and forming its identity: and from 1888 until today Celtic Football Club has been one of their most revered totems.

Fifty years after the event, the enormity of Celtic’s achievement was recalled by historian Professor Tom Devine, who encapsulated the extraordinary significance of the win in Lisbon for Catholics of Irish immigrant descent in Scotland, suggesting that Lisbon 1967 represented: “A key factor in the long story of the emancipation of the Catholic Irish in this country [Scotland]…… in terms of signal events, the Lisbon Lions victory probably stands alongside the visit of Pope John Paul II in 1982.[i]”

Celtic’s origins begin with the cataclysmic mass death dealing Great Starvation (An Gorta Mor) in Ireland, when millions of people died or were forced to flee a colonised island.

One of this event’s main consequences for Scotland was that Irish Catholic immigration led to the foundation, development and establishment of Celtic FC. 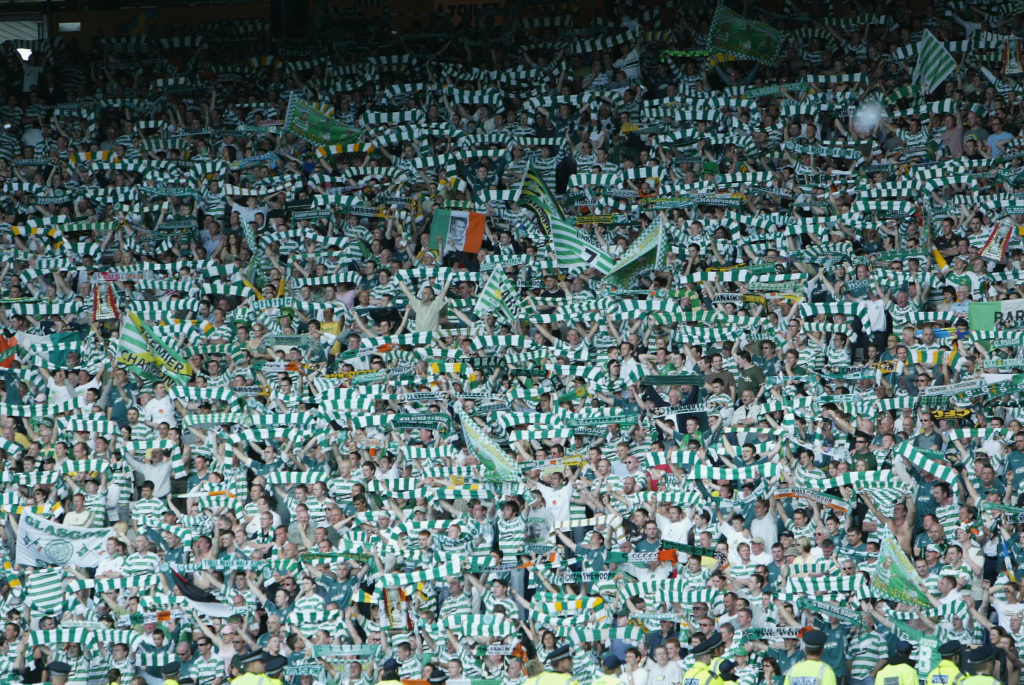 The main purpose in the club’s formation was explained in a circular issued in January 1888, which stated: ‘The main object of the club is to supply the East End conferences of the St Vincent de Paul Society with the funds for the maintenance of the ‘dinner tables’ of our needy children in the missions of St Mary’s, Sacred Heart and St Michael’s. Many cases of sheer poverty are left unaided through lack of means. It is therefore with this object that we have set afloat the ‘Celtic’.’

While not a Catholic football club, without Catholics, Catholicism and the Catholic Church in Scotland, there would be no Celtic Football Club.

This fact is fundamental and pivotal to understanding the club’s origins, appeal, evolution, resilience and identities: and also in terms of understanding Devine’s aforementioned comment regarding Lisbon 1967 representing a defining moment in the journey towards the emancipation of Catholics of Irish descent in Scotland.

For Celtic and its supporters 1967 has become a moment when the underdogs in Scottish society became the most successful underdogs on the field of play.  Some of the impact and meaning of Celtic’s victory in 1967 was expressed by supporters and others during its 50 celebration.  One said: ‘It was the best week of my short life.  I made my Confession on the 19th, my Holy Communion on the 20th, my Confirmation on the 24th and Celtic won the European Cup on the 25th.  I was the centre of the world that week.  When Tommy Gemmell scored the equaliser my two big brothers held me up and waived me about.  Could life get any better?”

Another spoke of his encounters while attending the game in Lisbon.

“What I remember was I kept meeting old school friends (I had left [school] only the year before),” he said.

“As most of us were Catholics and it was a holiday of obligation we headed for a church.  There were a few old ladies in black, a few rich people with seats inside the alter area, and masses of Celtic fans with scarves and banners.  The locals were totally bemused.”

One supporter who attended the match said, we were “no longer afraid to stand up and be counted”.

Ex-Celtic players and former Lisbon Lion John Fallon stated: “We changed a lot of attitudes for the good. We boosted the Catholics and the Irish”.

Another fan said: “They were our heroes in a way that Muhammad Ali might be for black guys in America”.

In 2017 a journalist added her own gloss while remembering the moment.

“Their achievement was a powerful beacon of achievement for an immigrant community that had been forced to deal with sectarianism and political marginalisation in Scotland,” she said.

Of course, numerous football fans celebrated Celtic’s win in 1967 and people from non-Catholic and non-Irish backgrounds have always supported Celtic.

Nevertheless, what is certain is that Celtic’s European Cup victory loses its more meaningful significance unless examined in close relation to the history of the multi-generational Irish community in Scotland.

To paraphrase C R James, when Celtic triumphed as European champions on what other occasion was there ever – among the Irish diaspora in Scotland at least - such enthusiasm, such an unforced sense of community, of the universal merged in a team of eleven (local) sportsmen or sportswomen?

Celtic’s 1967 victory is not merely the story of a great sporting accomplishment – as extraordinary as it was and remains – it was a landmark and iconic moment in the social and cultural history of a country (Scotland) and a people (Irish-Catholic diaspora) within that country. 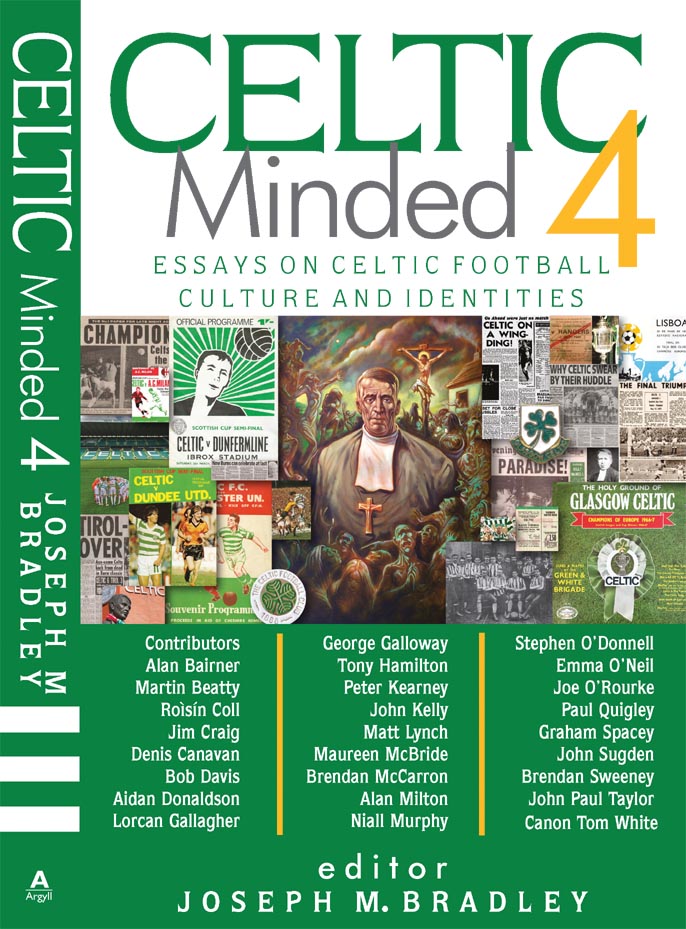 The full academic article on Celtic’s win in Lisbon can be found at ‘Soccer & Society’, special edition, ‘Moments, Metaphors, Memories: Defining Events in the History of Soccer’, Vol 20, Issue 7-8, November 2019.