A large replica of the trophy is displayed during the closing ceremony of the UEFA Euro 2020 Championship Final between Italy and England at Wembley Stadium on July 11, 2021 in London, United Kingdom. (Photo by Visionhaus/Getty Images)

AN INDEPENDENT review into the events of Euro Sunday in July has found that death and life-changing injuries could have occurred for some, and potentially many, in attendance.

The review, which was published today, Friday December 3, by Baroness Louise Casey, looked into the storming of Wembley stadium by those without tickets on the night of Sunday 11 July when England were facing Italy in the Euro 2020 final.

Some 2,000 individuals entered the stadium illegally without tickets, causing scenes of disorder which went viral on social media.

Stewarding issues, foresight in the run-up to the game and policing all contributed to the events of the night.

The knowledge that about 25,000 of Wembley's 90,000 seats would be left empty because of Covid restrictions contributed to a "perfect storm" of factors.

"That this should happen anywhere in 21st century Britain is a source of concern," Casey said in the foreword of the review.

"That it should happen at our national stadium, and on the day of our biggest game of football for 55 years is a source of national shame."

She stated that responsibility for the risk there was to human life lies with the individuals without tickets, who were "nearly all men, it has to be said", and that the events of the Hillsborough tragedy of 1989 weighed heavily on her mind.

"The drunkenness, drug taking, irresponsibility, criminality, and abuse of innocent people - including staff, families and disabled ticket holders - was shocking and intolerable."

She said that while she hoped the police continue to prosecute as many individuals as possible, "some of what happened was sadly foreseeable, even if the scale of it was not." 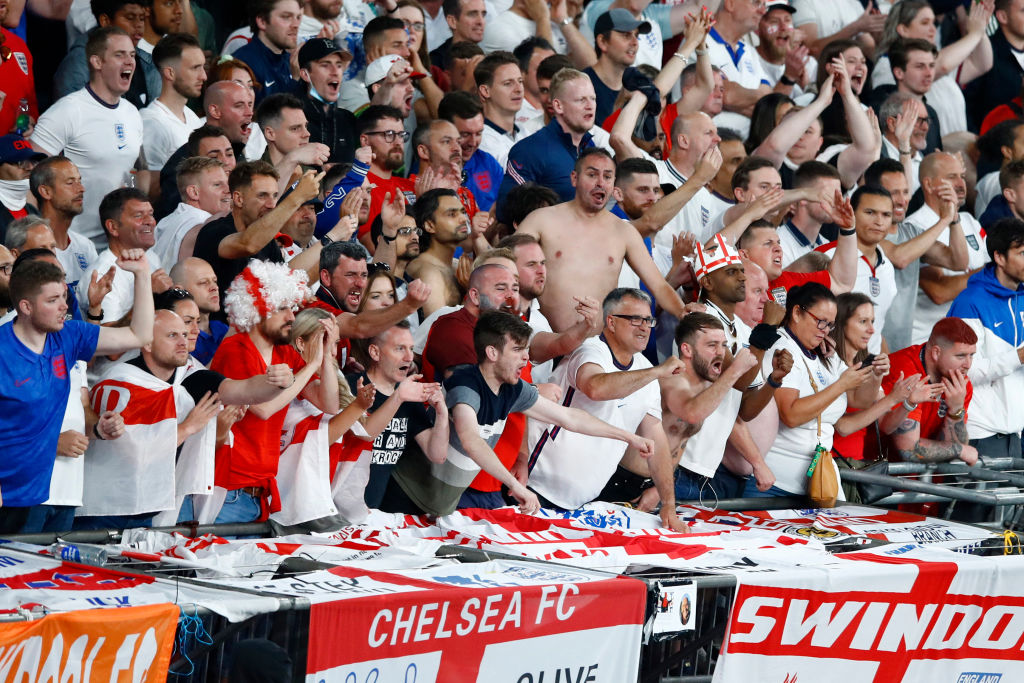 Supporters of England during the UEFA Euro 2020 Championship Final between Italy and England at Wembley Stadium on July 11, 2021 in London, United Kingdom. (Photo by Matteo Ciambelli/DeFodi Images via Getty Images)

The 128-page review goes on to detail the events leading up to the match and the rollout of the breaching of the stadium.

Drunkenness and drug taking were noted as having taken place from early on in the day.

Behaviour then deteriorated, and by midday fans had forced a single decker bus to halt and be evacuated for safety reasons while they climbed over it.

As the crowds then continued towards the stadium, one ticket holder who complained to the FA said they "saw people in wheelchairs struggling to get through the mosh puts, wheeling over cans and bottles and God knows what else."

By late afternoon, according to London Underground data, around 3,000 people were arriving every 15 minutes at Wembley Park Underground station.

By 5pm, "discussion among ticketless fans about trying to get into the stadium appears likely to have been widespread," the report said.

As crowds began to enter the stadium, the decision was made at 6.01pm to suspend Covid-19 checks, before it was reinstated at 6.41pm, which "inevitably brought ticketless fans closer to the stadium."

"There was a constant trade-off between managing security and crowd density," the report said.

"The decision to allow people, including ticketless fans, to come closer to stadium was about managing the risk of injury and ensuring everyone in the crowd was safe."

There were 17 mass breaches of the stadium that day, with an analysis of Wembley's records and of internal and external CCTV cameras showing that between 6.29pm and 7.46pm 16 mass breaches took place.

As the game progressed, "the priority of Wembley and the police was, increasingly, establishing how they could safely open the stadium doors to let people leave at the end when so many ticketless fans remained outside."

The result of the game saw England lose, which the report says helped to "stabilise the security and safety situation at Wembley."

"The loss removed the motivation from the ticketless hordes outside to get into the stadium and made exiting far safer for those inside," it said.

Racist abuse was aimed at England players on both social media and on the grounds of the stadium, some of whom missed penalties.

By midnight, the Olympic Way where most the most sever breaches occurred was clear of fans and the clean-up operation began. It took five days to complete. 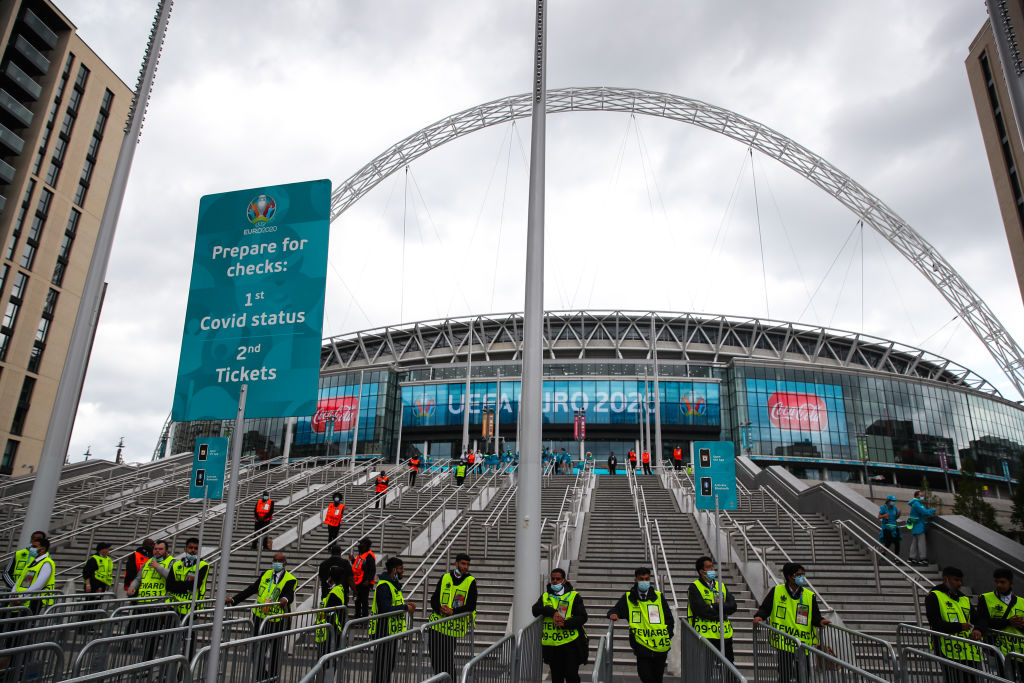 A general external view of Wembley with stewards and security manning the stairs behind Covid checks signage ahead of the UEFA Euro 2020 Championship Final between Italy and England at Wembley Stadium on July 11, 2021 in London, United Kingdom. (Photo by Robbie Jay Barratt - AMA/Getty Images)

The first recommendation is for the government to consider a new category of football matches of national significance, which can then be supported through maximalist police resourcing and the establishment of a sterile area within a certain distance of the stadium ('Zone Ex') to be restricted to ticket holders, among other things.

A review of stewarding should also be undertaken between the Sports Ground Safety Authority and the FA.

The third recommendation was that all stakeholders agree on a way forward on who is accountable for Zone Ex.

The fourth is that the FA lead a national campaign to bring about a sea-change in attitudes towards supporter behaviours.

"For too long the actions of a minority of England fans have been tolerated as a part of our national culture (albeit an embarrassing one), rather than confronted head-on," the recommendation noted.

The final point was for government to strengthen penalties for football-related disorder, "particularly behaviours which recklessly endanger lives and these penalties should be well understood and robustly enforced."

The FA has said it fully accepts the findings of the review.

“The FA apologises for the terrible experience that many suffered within Wembley on what should have been a historic night for the game," said CEO Mark Bullingham.

“Everyone at the FA was appalled at the significant levels of crowd disorder throughout the day on 11 July. The review makes clear that the circumstances leading up to the match led to a perfect storm of lawlessness."

He said "no event is set up to deal with such disgraceful behaviour from thousands of ticketless fans,"and that it must never be allowed happen again.

“I would like to thank everyone who worked at the match that day. Many people went well above and beyond their roles and performed their duties with courage and determination. This was often at personal risk to themselves.

“The lessons learned from this review will ensure that fans have a good experience at major international events at Wembley, as they have for many years.”