PETER STRINGER is ageless on the pitch. He has undergone a rebirth in England since leaving Munster permanently in 2013.

He may be best known for his iconic try against Biarritz in the 2006 Heineken Cup final that helped Munster win their first European crown, the 2009 Grand Slam and the host of ankle tap challenges over the years that prevented certain tries.

But the 39-year-old is far from finished and is in the best shape of his life as he prepares for the Aviva Premiership season with his new side Worcester Warriors.

“This is my twentieth pre-season and it’s always gruelling,” said the former Munster, Saracens, Newcastle, Bath and Sale scrum-half.

“But it’s always worth the pain because I know I’ll be in great shape and I want to nail down a starting position. It’s a short career so you must make the most of every second on the pitch.

"I’ve looked after myself well which has allowed me to prolong my playing career.”

“Munster will always hold a special place in my heart. Some of the happiest days of my life were spent playing at Thomond and when things were going well there for me it was the best place in the world.

Stringer was signed by Worcester’s Director of Rugby Gary Gold on a six-month contract to provide cover for first choice scrum-half Francois Hougaard, who is on international duty with South Africa at the Rugby Championship.

Gold and Stringer worked together at Bath between 2012-13 and also at Newcastle with Stringer enjoying a very strong working relationship with the former Sprinkboks coach.

He has also been welcomed at the Sixways Stadium by his former Munster and Ireland teammate as well as his close friend, Donncha O'Callaghan, who has been with the Warriors since 2015.

“I didn’t think twice when Gary (Gold) approached me about joining Worcester. He’s a top coach and I loved working with him at Newcastle and Bath.

"Obviously having Donncha (O’Callaghan) at the club was a big incentive. He’s a good friend and we have a lot of great memories together from Munster and Ireland.

"But we’re both here to win rugby matches and there’s no one else I would want on my team. The guy is a leader and a consummate professional.”

The pair are preparing for a friendly against Munster on August 24th before beginning competitive action the following week away to the Newcastle Falcons.

The Munster encounter will be Stringer’s first time facing the side he made 230 appearances for between 1998 and 2013, along with earning 98 Irish caps.

While Stringer admitted it will be strange facing the men in red, once the game begins he will be fully focused on performing for Worcester. Stringer left his home province for a loan spells at Saracens in 2011 due to a lack of playing opportunities.

“Munster will always hold a special place in my heart,” he said. “Some of the happiest days of my life were spent playing at Thomond and when things were going well there for me it was the best place in the world.

"But as soon as I was out of team with Munster and wasn’t being considered for Ireland, it became difficult.” 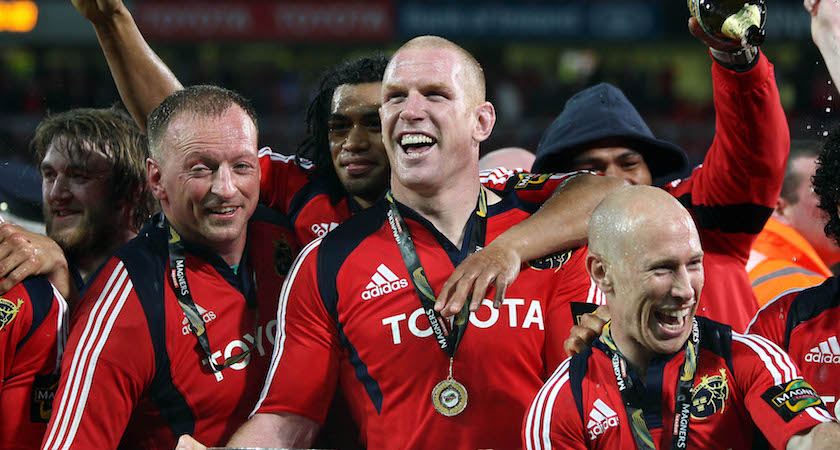 Stringer and his young family have settled in England but he admits that home is never far from his thoughts with the rest of his family still based in Cork city.

After four years in England, he still relishes his trips back to Ireland and meeting up with old Munster teammates.

“I really enjoy going home to visit my friends and family,” he said. “It can be difficult being away from home for long periods but the priority is playing rugby and I had to make to the move to England to keep my career going.

"It’s a demanding league with no easy matches so it’s kept me on my toes being out of my comfort zone.”

With the vast increase in physicality that has occurred since the game turned professional in 1996, players are more at risk than ever of serious injuries given the well-publicised issue of concussions.

But Stringer said that the moment a player starts thinking about injury, the more likely it is to happen.

“You cannot think about injury when you’re playing,” he said. “I’ve been very fortunate with injuries throughout my career perhaps because I play in a relatively low impact position compared to a lock or flanker.

"But any good professional will only think about executing the right technique and being focused on your job.”

Stringer belies his age in terms of robustness and mind set.

"His appetite for the game is insatiable and only a fool would bet against this legend of Irish rugby playing well into his forties.

“I have no concrete plans for retirement but I would like to stay involved in the game.”

He would surely make a fine coach after hanging up his boots.