Drogheda United will be playing First Division football next season after a 5-3 defeat to Shamrock Rovers at Tallaght Stadium on Friday evening.

They twice took the lead in the opening half hour, with goals from Mick Daly and Tiarnan Mulvenna, but a second-half hat-trick from Shamrock Rovers striker Danny North helped seal victory and a third place league finish for Pat Fenlon's side. That, in turn, sent Drogheda down after news of Limerick's win at Sligo was confirmed.

Drogs captain Mick Daly was refreshingly honest on Twitter after the game, saying "...absolutely heart broken tonight but facts be known we were the worst team in the league by a mile. We were a shambles from the very start of the year and got exactly what we deserved. As captain I'll take my share of the blame. I captained a club to be relegated, (it) will live with me forever."

Limerick live to fight another day in play-offs

Limerick completed a remarkable escape from the automatic relegation position, with their 3-2 win at Sligo Rovers, coupled with Drogheda's defeat, moving them into a two-legged relegation play-off final against Finn Harps, who beat UCD in the First Division play off.

After a run of no wins in their first 21 games, collecting only six points up until their first league win on the August 1, Martin Russell's side moved off the bottom of the league for the first time since the April 10 with their win at the Showgrounds.

They got off to a great start with goals from Shane Duggan and Paul O'Connor establishing a two-goal lead inside 27 minutes, and although Sandor Puri pulled one back for Sligo on the stroke of half-time, Vinny Faherty restored Limerick's two-goal advantage just before the hour mark.

With news of Drogheda sliding to defeat in Tallaght, the Limerick supporters began to celebrate but they endured a nervous last couple of minutes when substitute Ruairi Keating scored a second for Sligo late on, but Limerick held on for the win to move themselves off the bottom of the table.

The Shannonsiders will face Finn Harps in the relegation play-off, with the first leg on Monday at Market's Field and the away leg taking place in Ballybofey on Friday November 6th.

Dundalk wrapped up their title winning league campaign in style with a 4-0 win over Bray Wanderers at Oriel Park.

It's Dundalk's 11th league championship win in their history and the first time they have retained the title, and they wrapped up the campaign by breaking the record for the most goals in a League of Ireland season in the process. 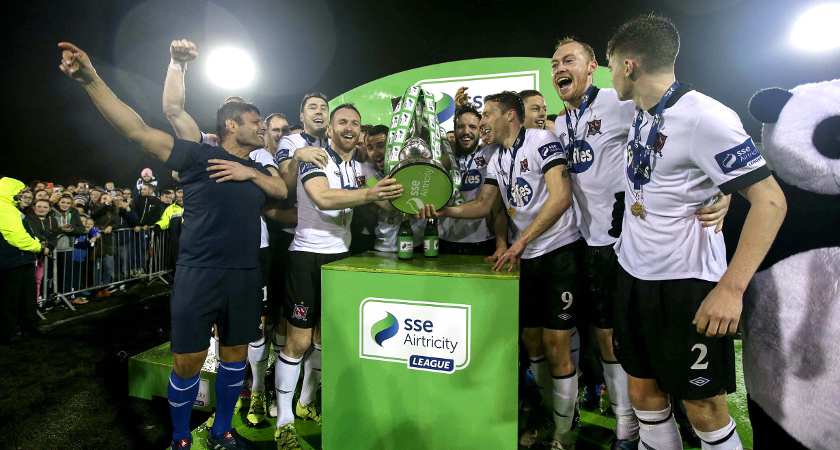 Dundalk lift the league title for the second season running [Picture: Inpho]
Ciaran Kilduff and Daryl Horgan put Dundalk two up after nine minutes, and after Dundalk's leading scorer Richie Towell slotted home a penalty for a third goal, he added another in stoppage time to bring his tally to 28 for the season.

That final goal ensured that Dundalk break the club record for the most league goals in a Premier Division season, finishing with 78 points and 78 goals scored.

For the second season in a row, Cork City are the Premier Division runners-up, with a 1-0 win at Dalymount Park against Bohemians clinching a second place finish, and at the same time ending Bohs' faint hopes of grabbing the last Europa League place.

The only goal of the game arrived with seven minutes remaining from the penalty spot, with Billy Dennehy's cool finish earning the Leesiders the three points after Roberto Lopes had been penalised for handball.

A 1-0 win for St Patrick's Athletic away to Galway United secured European football for Liam Buckley's side with a fourth place league finish.

It's the ninth time in 10 seasons that Saints have been in Europe, and next season's Europa League place was ensured when Aaron Greene fired home the only goal of the game from a Conan Byrne cross on the stroke of half-time.