4000 winners has been no stroll for AP

SO THE great AP McCoy has broken his 4000 win and made history.

I was with him on Sunday and witnessed AP ride the 3995th and 3996th winners of his career in Carlisle.

I was beaten into second on his last winner of the day, Red Lion Rock, an 11-8 favourite, and as we cantered back afterwards I was having the banter with him about all the press that were there.

I think he was a bit embarrassed by all the fuss, even joking that he was getting sick of it.

In the weigh-room, AP is just one of the lads, then he emerges and there are about 10 photographers outside from the top newspapers and the camera flashes are going crazy.

We wondered among ourselves at the weekend as to what AP will do when he reaches the 4000 winners mark. We were a bit nervous with him being so close, but now that he’s done it you’d expect him to just keep on pulling away. 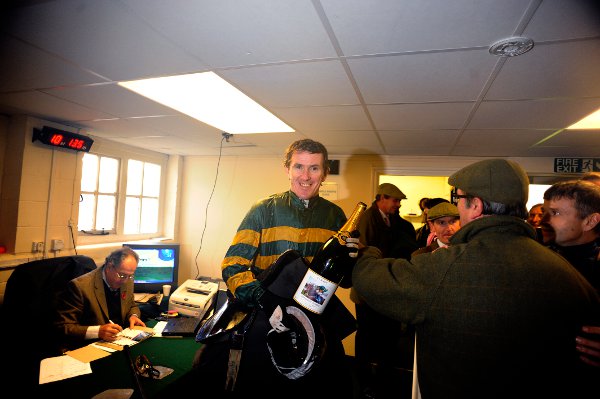 AP McCoy weighs in after his 40000 victory. Photo by Alan Crowhurst/Getty Images

It’s difficult to mention my own week beside that of AP McCoy’s, but it was particularly pleasing to win on Cockney Sparrow for John Quinn in Wetherby on Saturday.

She is a filly with promise, the ground suited her and we were only going a half canter really. I’d been tracking the favourite L’Unique, trained by Alan King, and once he tired we pushed on to the line.

I had a nice book of rides on Saturday. I had picked Trustan Times to run into a place and while I feel like he is stronger and more settled in himself this year, I felt he wasn’t fit on Saturday and finished fourth.

This run will have brought him on, however, and I reckon Tim Easterby is targeting the ‘Brush’ Handicap Hurdle in Haydock at the end of the month, which Trustan Times won last year.

There is definitely more to come from him and Cape Tribulation who will also be the better for Saturday’s run.