The Joes were the better team throughout the match but took their eye off the ball in the second-half as Harlesden came from five points down at half-time to momentarily lead in the latter stages.

However, the holders awoke from their lapse in concentration to regain the lead, and they were rewarded for being the braver side in the tense closing seconds, with McDonagh's fine effort from a tight angle being virtually the last kick of the game.

Harps opened the scoring with a point from Ciaran Houlihan but the Joes responded with a goal in their first score of the match, Eamonn McGovern finishing off with a neat finish after being teed up by Kevin Gallagher.

Indeed, Harps were sloppy in possession in the early stages and failed to win most of their own kick-outs, but Houlihan's impressive individual performance kept them within touching distance of their opponent.

James Gartland ended a dull nine-minute spell without a score, but it was worth the wait as the midfielder drilled over a delightful effort with the outside of his right foot, arguably the point of the match.

With half-time approaching, the Joes were looking much stronger than Harps and back-to-back points from Gallagher (one free) sent them in 1-7 to 0-5 up at half-time.

It threatened to be a game of two very different halves as Harps re-emerged as a different force, and three unanswered points – Sean O'Halloran's being the pick of the bunch – brought them within two points of the Joes only a few minutes into the second-half. 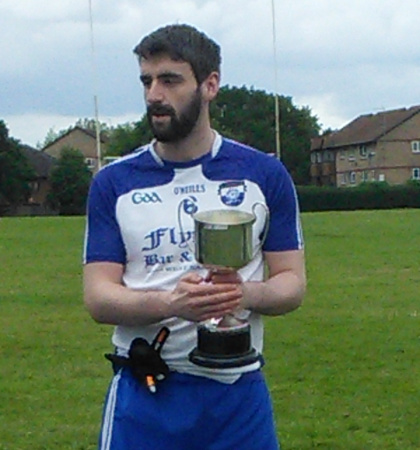 Mark McNulty responded for the Joes, a much needed point which steadied their ship somewhat.

The two sides continued to trade points but the growing influence of Harlesden's John Rafferty – who hit four points from play in the second period – saw Harps drag the Joes into a real tussle.

Harps soon took the lead for the first time since the opening score as Darren Lynch coolly slotted home a penalty he won himself, sending his side 1-11 to 1-10 up.

However, Joes responded with three unanswered points – two of which were Mike McAlynn frees – to regain their two-point advantage, though Rafferty and Ben O'Mahoney hit back for Harps, sending the sides into stoppage time deadlocked at 1-13 apiece.

The final moments were tense as Harps missed two golden opportunities to nick it, but Joes defended well under pressure and they were rewarded for their effort and patience as McDonagh only needed one chance to notch the late, later winner.