BY his own admission, Damien Duff is struggling with his new life. The old one ended last October, when after a low-key Leinster Senior Cup match for Shamrock Rovers, he drove back to his home in Stepaside, sat down for a cup of tea with his wife and realised he had reached the end. “I just couldn’t do what I used to be able to,” he said.

If it felt as though part of him had died that night, well that’s because it had. Football defined, as well as employed, him. He earned well over the course of his career – £20 million in wages – yet money was never the thing that drove him. Winning was, until – bravely, and in retrospect stupidly – he gave up a platform to add more medals to his collection at Chelsea by taking up Newcastle United’s offer to move north in the summer of 2007. Within two years, Newcastle were relegated – ‘and I was the man who scored an own goal to send them down’.

If there are regrets about that decision, he’s at peace with them now. What he can’t change, though, is the passing of time. He’s 37 now and the game he played as a child for fun, and as an adult for a living, is part of his past. Filling his time isn’t easy. Two nights a week are spent coaching underage players at Shamrock Rovers.

“The other night I was asked to go and coach the left winger and I had to stop and think, ‘what will I say to him here?’ When I played, I just did things by instinct.” Yet if he hasn’t quite got a handle on the communication side of things just yet, he has shown enough to suggest he could, in time, master the trade. “Duffer’s a great lad,” Brian Kerr, his former Ireland manager said. “His personality will see him connect with people and his knowledge of the game is superb. He’ll get his points across, no fear of that.”

And it isn’t just on the training paddock where he’s aiming to deliver a message. Via RTÉ, he has begun life as a pundit. “Who’d have thought that?” he said. “As a player, I stayed away from all that kind of stuff.” But times have changed. He may not need the money but he does need a reason to leave the house. “I liked the studying aspect of the punditry, getting info on the teams I was going to be talking about.”

Yet his agreement to sit alongside Liam Brady, John Giles and Eamon Dunphy comes with terms and conditions attached. He won’t commentate on Ireland games and risk the friendships he spent years cultivating. Yet ask him about his old clubs – Chelsea or Newcastle – and he won’t hold back. 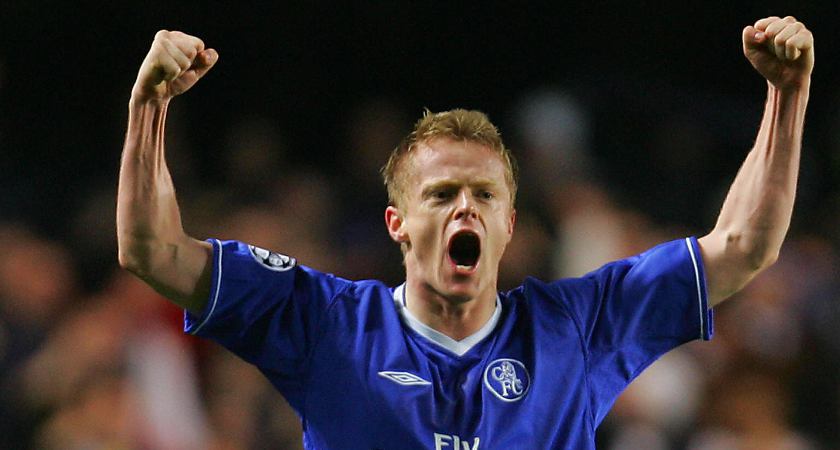 Damien Duff in his Chelsea days [Picture: Getty]
“This year has been a bit of a shambles at Chelsea and it is a big worry for any manager if someone as good as Jose Mourinho lost the dressing room,” Duff said. “It’s just so disappointing to see. Obviously there was something going on with [Diego] Costa as well. He wasn’t playing for Jose but since the new manager came in, he is on fire.

“I’ve seen stuff like that at various clubs. At the end of the day, the player should put in a shift, give 100 per cent, for the club, for the fans, for Chelsea regardless of what’s going on with the manager. When you see someone down tools, it’s disappointing. The idea that a player can pick and choose his games doesn’t sit right with me. You can’t turn your form on and off. Although it looks like Costa has done precisely that.

“It isn’t just him, though. Eden Hazard has been disappointing all year whereas last year he was getting compared to Messi and Ronaldo. So it will be intriguing to see how he gets on in the Euros against Ireland this summer because he has been way off this year.”

Yet even though Mourinho appears to be damaged goods on the back of his Chelsea dismissal – the third time he has been sacked in his career – Duff insists that Manchester United would be crazy to overlook him if a vacancy arose in Old Trafford this summer. “Look at Jose's CV – he has won the Champions League with Porto and Inter, won the league in Portugal, Spain, Italy and England. 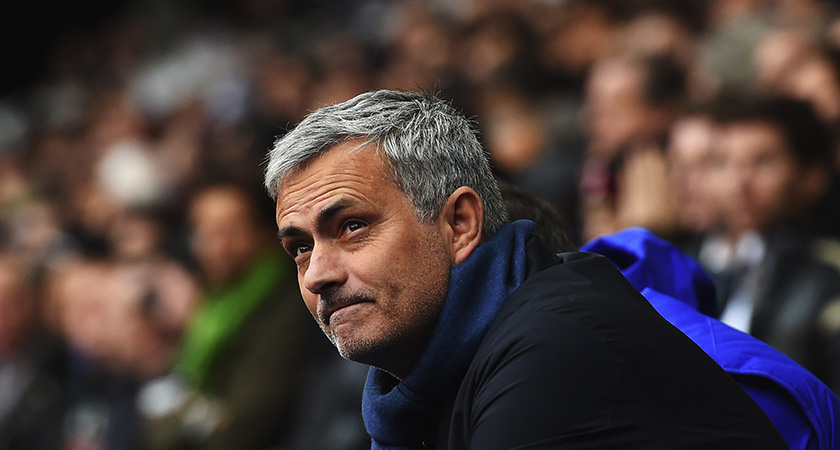 Jose Mourinho, former manager of Chelsea who Duff played under at Stamford Bridge [Photo by Shaun Botterill/Getty Images]
“When we won those two titles back in 2005 and 2006, the team spirit was great, possibly better than any Ireland team I’ve been in.

“His coaching sessions, the stuff on the training pitch every day, is stuff I’d never seen before and never seen since. It was just brilliant. Lads really enjoyed it under Jose. He gets you playing for him, makes you feel like a champion before we were champions. He turned more or less the squad that Claudio Ranieri had into double Premier League winners.”

Ranieri. It’s easy to forget that the Italian – who has resurrected both his own and Leicester’s fortunes since he joined the club last summer, was also the man who brought Duff away from his comfort zone in 2003, paying £17million to Blackburn Rovers. Persuading Duff, though, to move was as big a challenge. “I met him four or five times. It wasn’t an easy choice to leave.”

“Ranieri is a great guy, and while the thing that hovers over him is the fact he has never won a top league anywhere, I love him and want him to do well. All the lads at Chelsea loved him. We knew, three or four months beforehand, that he was going to be pushed out of there by the end of the season, but it just shows the respect that the lads had for him that we stuck at our jobs right until the end. The job he has done has been amazing this season and it shows you what hard work can do. It takes a team a long way.”

If hard work is a virtue he admires in Leicester, then he also sees similarities with how Martin O’Neill has set up this Irish side, who overcame a wobbly period in the middle of their European Championship campaign to regain their composure and qualify for this year’s finals in France.

“I’m positive about how they will do,” Duff said, “because I've no doubt they will be well prepared. It's a tough group, but not as tough as the one we had in 2012. Martin and Roy have done a great job and when they get to the finals, they’ll know they’ll have an advantage because the Irish support is something else. 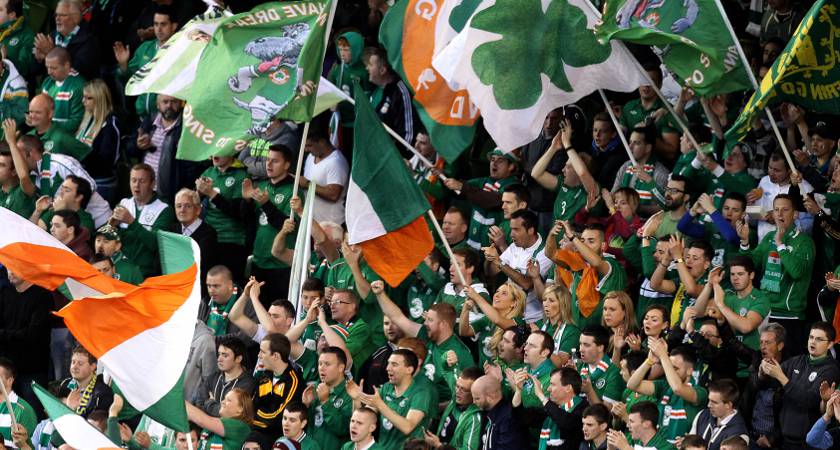 Duff says Ireland fans are the 'best in the world' [Picture: Inpho]
“I remember Euro 2012. The atmosphere against Croatia, when the national anthem was played, was spine tingling stuff. I was thinking at the time ‘wow I’ve never felt anything like this or seen anything like this before’. Obviously we went on to lose the game, but they carried on that emotion, that party for the next two games. We have the best fans in the world, because it’s obviously easy to cheer a team when things are going well, but it didn’t happen for us in Poland and they stuck by us.

“Probably drink had something to do with it but it is great when you see so many people enjoy themselves in a good natured way. I have seen it when things go the other way. I’ve been at Newcastle where they’ve had a few beers in the stand but you get a different response up there. We were kind of embarrassed by how things went in Poland but our people stuck by us and we’ll always remember that.”

Which is why he will travel to France this summer. Years ago, when he was injured, he took a trip to Bratislava for the European qualifier against Slovakia, soaking up the atmosphere around the city, taking his seat in the stand, hailing a taxi to get back into town afterwards, just like any other punter. Partially that was why there was such a strong connection between the Ireland fans and him. That – and the fact he was one of the most gifted Irish players of his generation.

“Well, when I look back at my career, the things that jump out are the disappointing things. It’s obviously too late to put them right. But whenever I played a game, I always looked at the negative things, the bad bits, rather than the good bits. I guess that’s the way I am. That’s the way I always have been.”