LONDON IRISH have been in talks with Hounslow Borough Council about a move that could see them return to play rugby in the capital.

The Exiles have played at the Madejski Stadium in Reading since 2000 and are contracted to the groundshare until the 2025-26 season.

However, the club have revealed they have held discussions with the council about a possible groundshare with Brentford at the proposed 20,000-seater Brentford Community Stadium.

London Irish revealed on their website that they have been in talks with several clubs over the past few years about a groundshare, adding: “Brentford Football Club, who are well advanced with their own plans for a new 20,000-seat stadium in west London, is one of the club's concerned.

“As an initial step in assessing this option, London Irish has today (August 15) begun formal discussions with the London Borough of Hounslow to explore the potential to play rugby at the new stadium.”

Councillor Steve Curran, Leader of Hounslow Council said of the plans: “The new stadium is an exciting development that will be a real boost to Brentford and to the borough as a whole. 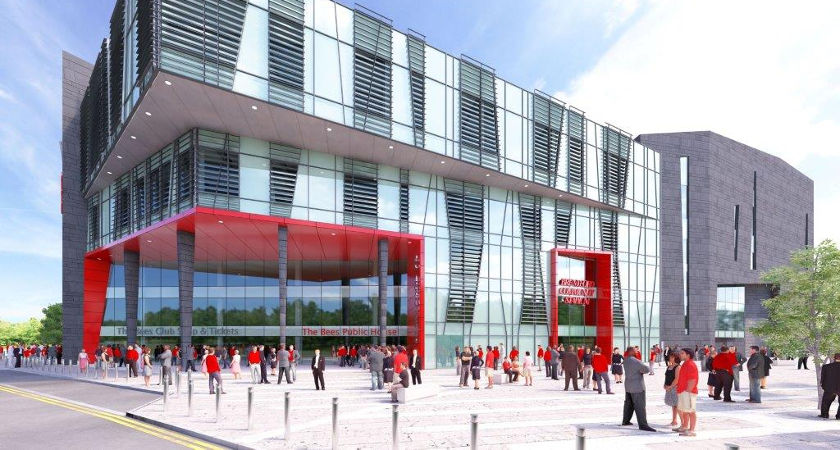 An artist's impression of how the Brentford Community Stadium could look

“Having a major rugby club based there as well as Brentford Football Club would be a real bonus, and London Irish are a fantastic club that has a track record of building strong links with the community and local schools.

“The Council will work closely with all concerned to ensure a successful outcome.”

However, with the proposed stadium not due to open until 2018 at the earliest, Irish eyes are focused on the Exiles’ Championship campaign, which begins at home to Doncaster on Saturday, September 3.

Speaking about the preparations for the new season, London Irish chief executive Bob Casey said: “We’ve won two out of two, we went away to The Stoop, played Harlequins and beat them 28-12 and played all 33 fit players.

“Then we played Nottingham here [at Hazelwood] in front of 2,000 people on Friday night – great atmosphere, great old school London Irish – and we beat them 43-14.

“Brendan Venter, Nick Kennedy and the coaching staff are doing an excellent job and the players have really responded to the new set-up.”

The Exiles complete their pre-season preparations with a game against Loughborough at Hazelwood this Friday night at 7.30pm.