LONDON manager Ciaran Deely has identified the five minute ‘wobble’ in which his side conceded two goals as the turning point their defeat to Mayo.

The Exiles began the game well but after losing their composure when collecting short kick-outs, despite initially impressing in possession, the hosts were set upon by the Mayo forwards.

That led to a momentary loss of confidence, during which time the ruthless Westerners put the game beyond doubt with two quick-fire goals on 19 and 24 minutes, eventually running out 2-16 to 0-9 winners.

However, despite a handful of errors which were duly punished, Deely had nothing but praise for his side’s efforts.

“I thought there were aspects of our performance that were very good,” said the Wexford native. “Some of our point-taking at times was excellent.

"Obviously we’re disappointed with a couple of mistakes in the first-half to allow them in for the two goals, but I thought apart from the goals we were really in the game, we were making a game of it.

“We made it difficult for them – they lost Cillian O’Connor (black card) and shot a few wides early on, and at that stage we were well in the game.

“But I’m very happy with my lads and very proud of the players. After those two goals, you could see with the crowd people were shouting in at the players about the kick-outs and things, but our players never let it actually get to them.

“We lost by 13 points in the end but I thought our lads did well and they kept going to the end.” 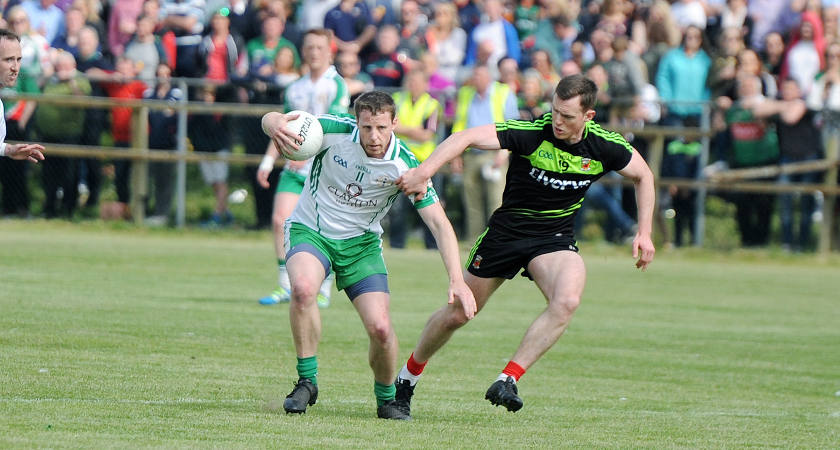 Mark Gottsche in possession for London against Mayo [Picture: Malcolm McNally]
On the subject of kick-outs, Deely insisted the plan was always to mix things up, but Mayo were good enough to react to whatever London threw at them.

“We varied it and we always wanted to vary it,” said Deely. “During the league, because we were getting into a new system, we played it short quite a lot, so we were used to that. But Mayo were very physical and made it difficult for us at times and they turned over quite a lot of ball.

“Our lads were maybe a little bit nervous in possession, but then we started hitting James Moran (in midfield) more as well as Mark Gottsche and Liam Gavaghan, along with playing it short and quick as well.

“I think we did quite well on our kick-outs. There was just that little period in the first-half were we kind of wobbled a little bit.”

Deely takes pride from the fact that London were able to put Mayo off their game, while he thanked backroom saff member Ross Bennett for getting the side into peak physical condition.

“I think the biggest thing we took from it was, at times, we made them look not so amazing,” added Deely. “I’m not going to say average, because they’re obviously above average, but to be able to make it difficult for them; we’ll take great heart from that.

“Remember, Mayo were at the beginning a few years ago, building a great team – now that team has been in All-Ireland finals and All-Ireland semi-finals, I mean this is a serious, serious team.

“For us to match them for fitness, I’ll have to give credit to our sports scientist Ross Bennett. I never mention him, but I worked with him at QPR and we’ve really taken the minimalist approach in that we’re not killing them in the gym or the pitch, we’re doing smart training with sports science’s support and I think it showed quite well.”