MANCHESTER UNITED as a football club seem to be in turmoil right now and everything does not look rosey on the red side of Manchester.

Many supporters have become disillusioned and emotionless while watching the senior team and to be honest you can't blame them.

The brightest aspect of Manchester United's season has not come from the seniors, but in fact their U18 team, who play in the FA Youth Cup final tomorrow against Nottingham Forest at Old Trafford.

As of May 10th, the game between United and Forest has sold out all of it's tickets

United confirmed on Tuesday afternoon that 63,500 tickets - priced at just £1 - had been sold for the showpiece game with all receipts going to the club's charity foundation.

The crowd will far exceed the previous Youth Cup attendance record of 38,187, set for the first leg between Arsenal and United in March 2007.

The last time United reached the final was in 2011, where the likes of Jesse Lingard, Paul Pogba, Will and Micheal Keane all lined up for the club in a  6-3 aggregate victory over Sheffield United in the final.

This year United have a new promising crop coming through and here is everything you need to know about the next bunch of United kid's primed for bigger things. 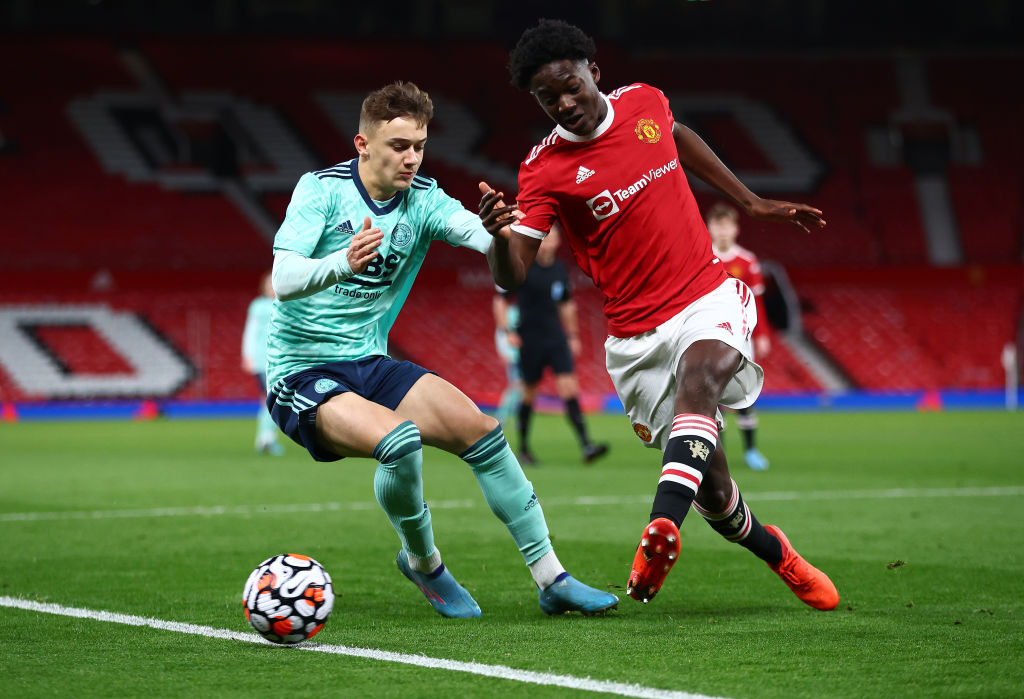 Signed from Atletico Madrid in 2020, the 17-year-old is extremely skillful and has a blinding turn of pace on him.

He's scored 2o goals this season, 14 for the 18's, four for the 23's and two in the junior Champions League this season and is United's joint top scorer with Charlie McNeill with five goals in the Youth Cup.

This year he also received a call up to the senior Argentine national team and got to train with the likes of Lionel Messi and co.

This was then followed by a United senior debut in the 1-1 draw against Chelsea last month.

Don't be surprised if he gets on the scoresheet more than once tomorrow, he's been tipped for big things from people inside Old Trafford

"He has to work hard and get physically stronger but technically on the ball he’s been training with us for the past month and you can see with every training session he’s getting better.”

Kobbie Mainoo is only 16, but looks like he's wise beyond his years in the middle of the park.

The Stockport-born boy has everything you want in a midfielder, strong, quick, can dribble and knows how to pick a pass.

He's been compared to the likes of Paul Pogba online for his impressive display of strength and running style.

This year Mainoo (2005) became one of the youngest players in the Under-18s, playing in the UEFA Youth League, and even making a handful of appearances in the Premier League 2, where most players are almost 20.

Alongside midfield partner Dan Gore, the pair have steamrolled United into the final of the Youth Cup this year for Nick Cox's U18 side.

Manchester United fans have waxed lyrical about the youngster this season

Another echoed the sentiment and said: "It really is difficult to express just how complete a player Kobbie Mainoo is for this age group - great workrate and engine, brave, combative, dynamic, adaptable, a beautiful dribbler and just glorious technically.

Manchester United’s Kobbie Mainoo could be the talk of town in the next few years to come if he keeps his head cool.

Charlie McNeill signed from rivals Manchester City in 2020 after a host of clubs battled to sign the young goal machine.

He's scored five goals in the run to the FA Youth Cup final this year and has the same as his striking partner Alejandro Garnacho.

A deft eye for goal, he may be one to shine under new boss Erik ten Hag next season because of it.

Signed from Tromsø's youth system at 15, United acted quickly to snap up on of the brightest prospects in Norwegian football, when he turned 16

They beat the off the likes  Liverpool and Everton to land the teen.

The 17-year-old is widely tipped to be a star of the future for United and Norway, and he was named as the best football talent of the year among under-15 players in Norway in 2019 by the Norwegian Football Federation.

Fans are very excited about the Norwegian's talents

'A lot of people probably aren’t aware of this player just yet, but trust me, in a few years they will be', said one Twitter user

The Final kicks-off at 7.30pm BST on Wednesday 11 May, and fans can watch it live on The FA Player or as part of a Paid Online Event (POE) on Facebook for 99p.