Rio 2016: Mystery of the green pools finally solved at the Olympic Games

WITH Team Ireland still awaiting their first medal at Rio 2016, a green tidal wave of success is hopefully only around the corner.

But on the evidence of the water polo pool and the diving pool at the Maria Lenk Aquatics Stadium, it would appear some sort of green tidal wave has already taken over the show.

Spectators and viewers were left baffled earlier this week when the diving pool began to change colour, eventually settling on a misty green shade, having previously been bright blue. 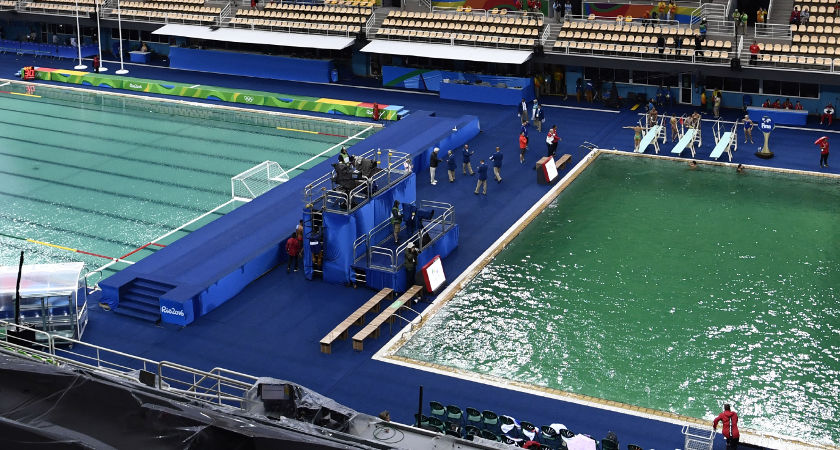 The water polo (L) pool soon started to turn after the diving pool [Picture: Getty]
Some cheekily blamed the Irish, but when pressed for an actual explanation, the authorities were as puzzled as the journalists, viewers and competitors.

Good to see @paddyb_ireland up to his old tricks again and turning the pool green for the women's diving pic.twitter.com/ej9yeBa6Dg

the olympic diving pool is green... Ireland I'm lookin at you

Diving went ahead amid assurances the water was safe, but when the polo pool next to it began to turn, the fun and games were over and journalists demanded answers.

FINA, the International Swimming Federation, finally responded after carrying out tests on the water, releasing a statement to explain the results.

“FINA can confirm that the reason for the unusual water colour observed during the Rio 2016 diving competitions is that the water tanks ran out some of the chemicals used in the water treatment process.

“As a result the pH level of the water was outside the usual range, causing the discolouration. The FINA Sport Medicine Committee conducted tests on the water quality and concluded that there was no risk to the health and safety of the athletes, and no reason for the competition to be affected.”

Having been assured there’s nothing to worry about, hopefully the funky shade of green can bring the luck of the Irish when Team Ireland diver Oliver Dingley performs on Monday.

Dingley is Ireland’s first Olympic diver in 68 years and is considered to have a realistic chance of making the final of the Men’s 3m Springboard.