O’NEILLS is reproducing some of its most iconic jerseys in a retro range designed to bring some sporting nostalgia to GAA followers.

The range will feature the kit worn during some of the sport’s most historic moments – including the All-Ireland Senior Football Final of 1983, when ‘the 12 apostles’ of Dublin defeated Galway will always be one.

It will include that Dublin ’83 top – with its classic two-tone blues, open neck and collar - as well as one of their Galway opponents, albeit from their hurling heyday in the late 1980s.

Kerry’s football treble from the mid-1980s is also commemorated, as well as Tyrone’s first appearance at Croker in 1986.

Derry’s jersey from their Ulster championship victory in 1987, as well as the one worn by their opponents, Armagh, has been included in the range, alongside an ‘80’s classic from Fermanagh.

Mayo fans will remember the 1989 All-Ireland football final when they made their first appearance since 1951, while Antrim supporters will never forget their journey to the All-Ireland hurling final that same year.

Their conquerors, Tipperary, are also celebrated with a retro jersey from that season when they won the Liam McCarthy for the first time in 18 years. 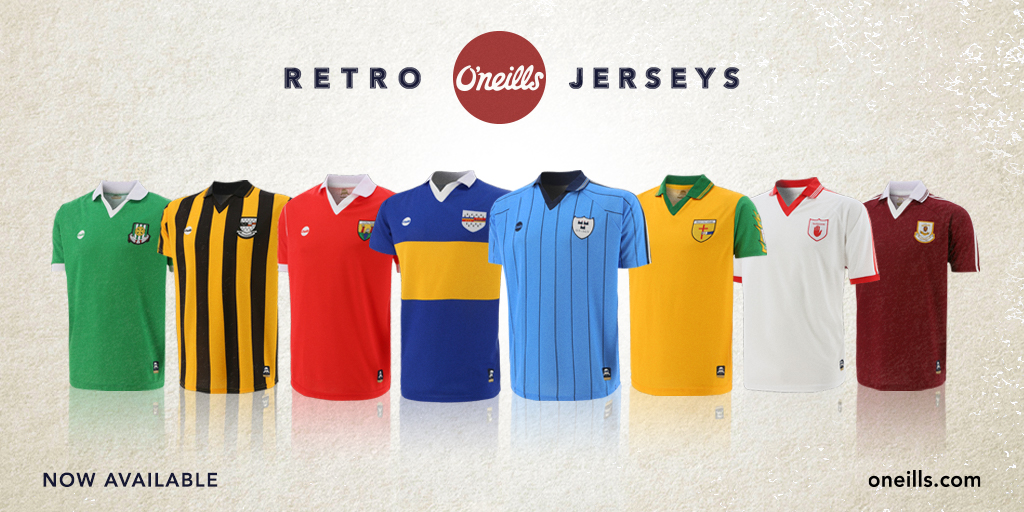 Inspired by the 1990 double, the Cork retro jersey boasts the unmistakable look of the Rebel county, while Gaelic jerseys representing both Down and Meath are included for their places in the 1991 footballing final.

The jerseys worn by the 1992 football and hurling heroes of Donegal and Kilkenny respectively brings back plenty of ‘90’s nostalgia, as well as those worn by Limerick and Wexford in 1994 and 1998.

Cormac Farrell, Marketing Manager at O’Neills, said: “During the COVID-19 lockdown period, GAA fans have been able to enjoy some of the great matches of the past which have been replayed on TV. A lot of people commented on the jerseys and the demand was there to reproduce some of the classics.

“Our retro range will appeal to those who remember the glory games from the first time around as well as those younger players and supporters who have only seen them for the first time more recently but wish to emulate the stars of a previous generation.”

While the new retro range will look like the originals, the fabric now used in their manufacture will reflect the latest advances in research and technology which O’Neills has pioneered in the intervening decades.

By: Anthony McLaughlin  -  3 days ago