Pro12 final preview: Connacht are staring at history in this year of the underdog

THE wind came scudding in off the Atlantic Ocean, throwing its weight behind the Connacht pack as they battled ferociously to defy the Glaswegian attack.

All year they have been defying the odds, streaking into the top four during the early stages of the season, when the World Cup was ongoing and every other team had more absentees than they.

Then, when all the internationals returned to club duty, the predicted script was meant to unfold. Leinster would find form; so too Glasgow, Ulster, Ospreys, Cardiff. And more to the point, Connacht would slip away, because that is what they always did.

Wasn’t it? Well, history seemed to suggest so. The western province had never finished higher than seventh since the Pro12 was formed. Worse again, in 126 years of rugby, they have never won a trophy.

So why back them now? Why believe this would be their year? As Christmas came and went, so did their unbeaten record in the Sportsground. Was this when the dip would begin?

Logic suggested so. As injuries piled up, so did the list of available excuses. Yet no one heard them. Instead, landmark win followed after landmark win. Munster came to fight for their lives. And lost. As did Leinster, and then, two weeks ago, Glasgow – to hand Pat Lam’s team a home semi-final.

The problem was that Glasgow, again, provided the opposition. Last year’s champions are brilliantly coached and generously funded. All in all, they should have had too much for Connacht.

But as the clock ticked down and the score stayed close, you began to wonder if the dream would turn into a nightmare, if the favourites would find inspiration from somewhere, if a five-point deficit would turn into a two-point victory and if another sorrowful mystery would be told from the edge of the Atlantic.

Not this time. Instead, on an evening of raw emotion and unchecked passion, the roar that greeted referee Marius Mitrea’s final whistle could have been heard over a mile away. Once this greyhound stadium was only known for its dogs. Now it is for the underdogs.

How else do you explain why people turned to the person standing next to them and smothered them in an embrace? Why did young boys run onto the pitch in exuberance while old men wiped tears from their eyes in joy? This, they knew, wasn’t just about rugby. This was about where they come from as a people and where the players have come from as a team. 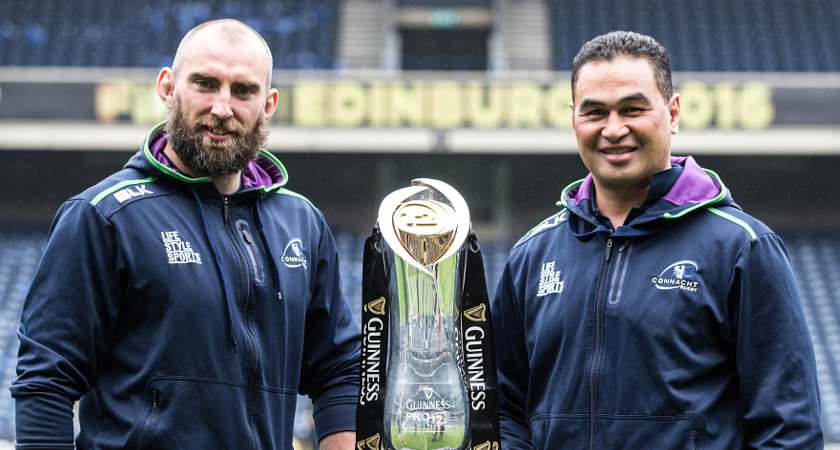 Connacht captain John Muldoon with head coach Pat Lam [Picture: ©INPHO/Dan Sheridan]
“It’s appropriate,” John Muldoon, their captain said, “that this should happen on the weekend that Joe McDonagh passed away. He was a great Connacht man. Earlier, we watched on YouTube the two Joes, Joe McDonagh and Joe Connolly, stand on the podium at Croke Park in 1980 after Galway won the All-Ireland. One spoke for the entire county, one sang for it. We’ve a lot of GAA people who support us. We wanted to do it for them, to do it for all of Connacht.”

That Connolly, the captain of that Galway team from 36 years ago was referenced is particularly apt, given how – 13 years ago, when the IRFU were considering ditching Connacht from their roster – he turned up at a public meeting in the Radisson Hotel in Galway city, and spoke with typical passion about how significant a role the rugby team played in maintaining the province’s identity.

“The Railway Cup is not what it used to be,” Connolly said that night in front of an audience which contained several GAA players. “The Connacht name cannot be wiped off a map.”

This year it, well and truly, has been put on it. With the national team’s fortunes heading into reverse, and the established big three, Ulster, Leinster and Munster, all failing in Europe, Irish rugby has desperately needed a good news story. Connacht are it.

Never before had they qualified for Europe off their own bat, nor had they ever reached a Pro12 semi-final, never mind a final. Yet here they are, staring at history, with Muldoon – a throwback to the bad old days when they routinely finished bottom of the league – embodying everything that is good about this story.

“Leinster are four-time league champions and three-time Heineken Cup winners. We must be 50/1, are we?’ he said, with a twinkle in his eye. “They know how to win finals, they've got big-game players so definitely they’re in the advantage, but hopefully there'll be a big Connacht crowd over there and that'll be a big help to us.

“It’s great to get to a final but we've got to try and win it now. It's not going to be easy – we have our work cut out.”

So, however, will Leinster. The odds may favour them. They may have the advantage of big-game experience. They may have that extra day to recover. But the last time these sides met, it was Connacht who won. Since then, they lost – naively in Grenoble and Treviso. Lessons have been learned. Haven’t they? “Yes and that’s the important thing,” Muldoon said.

All of which sets us up for a trip to Edinburgh this Saturday, a city which celebrated the end of its own hoodoo this week, when Hibs won their first Scottish Cup in 114 years. Connacht’s drought is 12 years older still. Yet in this year of the underdog, only a fool would dismiss the idea there could be more Sunshine on Leith this Saturday evening.