Dublin , Ireland - 11 November 2021; Republic of Ireland manager Stephen Kenny after the FIFA World Cup 2022 qualifying group A match between Republic of Ireland and Portugal at the Aviva Stadium in Dublin. (Photo By Harry Murphy/Sportsfile via Getty Images)

IRELAND HOSTED Portugal last night in a sold out Aviva Stadium where Stephen Kenny's men held the 2016 European champions to a draw. Kenny's reign has started to show positive signs and many feel the Ireland team is on an upward trajectory, but some like Liam Brady, the RTE pundit felt that Kenny shouldn't be afforded more time as Ireland boss.

Brady, who has been a long time pundit for RTE gave his views alongside ex player Richie Sadlier, who fought for Kenny. 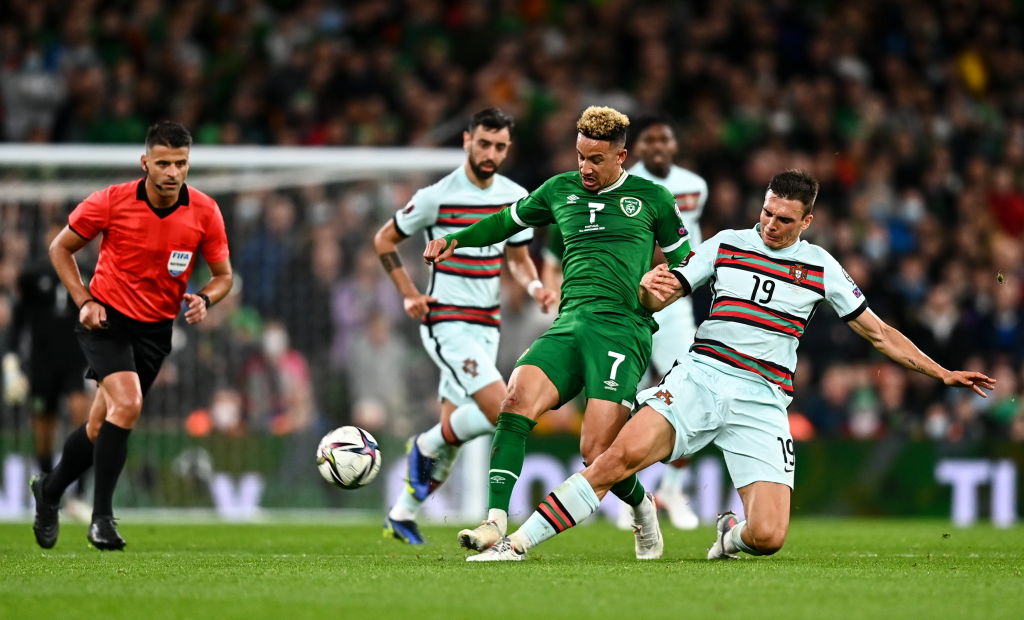 After taking over from Mick McCarthy in April of 2020Kenny's Irish team have had some interesting results during his tenure. His style of play has taken a while to get going, but there seems to be lift with the concept. Ireland beat Azerbaijan and Qatar comfortably and even nearly beat Portugal in Faro, before Ronaldo spoiled the party. Kenny's Ireland future is set to be decided next week according to reports. The last few results have been positive.

Richie Sadlier gave praise to Kenny's use of Ireland's young players and bravery in playing inexperienced players throughout the World Cup qualification campaign, Andrew Ayobamidele.Chiedozie Ogbene, Gavan Bazunu are examples of this .

I'd put the brakes on that a bit, Darragh. [The wins were] against Azerbaijan and Qatar. If it wasn't for Bazunu we would have been well beaten by Serbia.

I think the jury is still very much out. He has these two games, but his contract goes on until next June and there's some friendlies to be played in March and also in June we have some Nations League games.

If I was one of the people in the FAI that had to make a decision on Kenny, I'd sit and wait. I'd wait until we play those games, why do you think he deserves a new contract? Why does Richie?

I'm saying if I was one of those people to make that decision, I wouldn't be in a rush to make any decision. This is possibly the worst campaign that we've ever had in qualifying for the Euros or World Cup in the last 20-odd years.

Sadlier offered as much to Brady, pointing out that the squad is far weaker than previous Irish squads. Sadlier also pointed out that talents like McGrath, Omobamidele, and Chiedozie Ogbene had been given their bows by Kenny, who must be praised for his faith in the future of Irish football.

Sadlier said that this Irish squad isn't as strong as other squads and praised the likes of Omobamidele, and Chiedozie,

When pushed by Sadlier what he was waiting for from Stephen Kenny, Brady had one simple answer: "Results."