THE new season is underway in Warwickshire with Sean McDermotts, St Brendan’s and St Barnabas making early headway in the Senior Football League.

The county champions returned to Páirc na hÉireann on Sunday, March 20 with a dominant display against Leicester, bagging six goals in the process.

Over in Erdington, there was a similarly impressive start by St Brendan's who came away from Holly Lane with a 3-10 to 0-04 victory over Erin go Bragh, while at Holbrooks an exciting encounter between St. Barnabas and John Mitchels edged in favour of Nottingham on a score line of 0-16 to 2-07.

Under sunny skies at Warwickshire headquarters, McDermotts set to their task early on with points from Conal Dowling and Joel Powney, James McDowell punching over a score after a run from the right before a fine team move paved the way for Joe Owens to drill home the opening goal of the campaign. 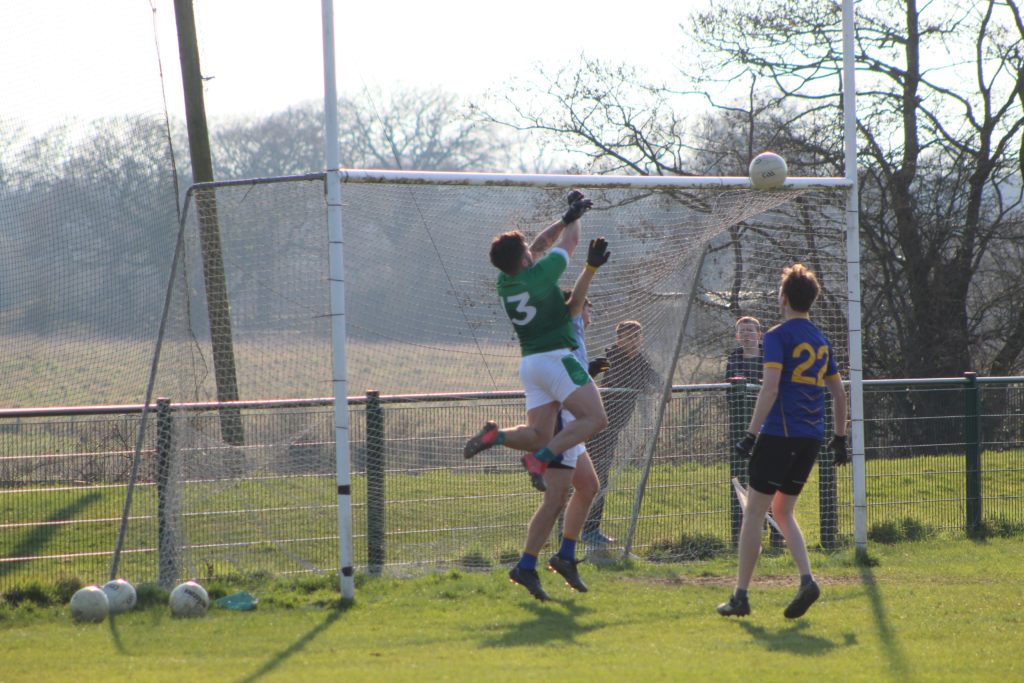 Conal Dowling jumps for the ball for McDermotts

Ryan Flanagan retaliated with an excellent score for Leicester at the clubhouse end but the direction of traffic remained green with three further scores from Powney preceding two goals in the closing moments of the half through Owens and Powney.

It meant a lead of seventeen points had been accrued by the change of ends and that was extended as the action got back underway in the second period.

Again it was corner-forward Powney who was making the most of the opportunities afforded to him by the continual turnovers forced by McDermotts, four points for him sandwiched a retaliatory free converted by Adam McKenna at the other end.

Soon after points from play by Jack Hallahan and John Dowling, McDermotts grabbed their fourth goal through Dowling who finished from a tight angle.

McKenna landed his second free soon afterwards for Leicester but McDermotts eased their way to an opening victory with two late goals thanks to efforts from Declan Staunton and Dowling with a backheel flick from close range.

Up next for McDermotts is a rematch from last year’s county final with Roger Casements the visitors to Páirc na hÉireann as they being the defence of their league title.

As part of the festivities to mark International Women’s Day, Erin go Bragh held their first Women’s Festival since the pandemic earlier this month at Holly Lane.

Teams from across the GAA in Britain took part in both camogie and football competitions in Erdington with Brigid Jones, Deputy Leader of Birmingham City Council, special guest.

In the camogie competition Thomas McCurtains took top honours winning the cup with victory over De Cymru in the final, while Fullen Gaels came away with silverware to take back to Manchester in the form of the shield.