TOTTENHAM HOTSPUR have released an update on their investigation into the racism allegations made by Chelsea defender Antonio Rudiger.

The Germany international claimed to have heard monkey chants coming from a section of the stadium during the Blues’ 2-0 win at White Hart Lane on Sunday. Rudiger, who played a key role in Chelsea’s victory over their London rivals, was involved in an important VAR decision that saw attacker Son Heung-Min sent off.

Son appeared to have kicked out at the Chelsea star and received a red card for violent conduct after VAR came into play. Shortly after, Rudiger alerted his captain Cesar Azpilicueta to what he claimed were racist chants. Play was stopped and the home support were subsequently urged to cease and desist on three separate occasions.

Tottenham issued a statement via their official website in the wake of the allegations but have since put out another one stating that, while they will continue to investigate the matter "exhaustively," initial probing has proven inconclusive. 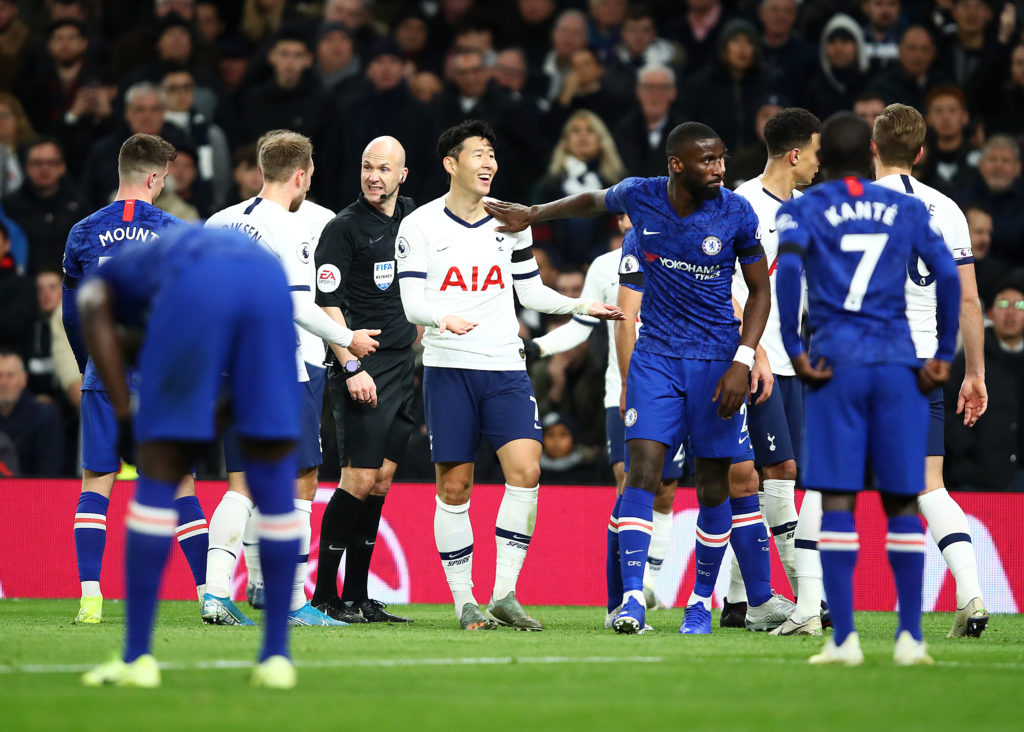 The chants were reported in the aftermath of Tottenham's Hueng Min Son (centre) getting sent off after kicking out at Antonio Rudiger following a tackle.

"During yesterday’s match against Chelsea, Antonio Rudiger reported hearing alleged racist abuse from an individual(s) in the South Stand," the latest statement reads.

"We are able to track every fan via the cameras and have spent many hours reviewing CCTV footage. We have engaged lip readers to study the footage and contacted Chelsea for further information from their players. We have also taken statements from other parties present at the time. The police will be reviewing our evidence alongside us. Please be assured we shall be exhaustively investigating this matter.

"This Club has a proud track record of anti-racism work across all our communities and we are determined to ensure that we conduct a thorough investigation. Any fan found to be guilty will receive a lifetime ban. At this time however we should point out that our findings are inconclusive and would ask that comment is reserved until the facts are established."

The club is also asking persons who witnessed the incident to reach them at s[email protected] or 07537 404821 via text.

"In respect of protocols – when the incident was conveyed to the referee Anthony Taylor, he took the decision to call for the implementation of Stage 1 of the UEFA protocol – rather than the Premier League protocol - and asked for an announcement to be made, as well as requesting a further announcement which created a misconception that any issue was on-going," it continues. "The Premier League protocol differs from UEFA protocol in that it does not call for an announcement rather that the individual(s) be dealt with by the Safety Team in the first instance."

Tottenham will be back in action this Thursday and are set to host Brighton & Hove Albion in a Boxing day fixture. Ladbrokes has Jose Mourinho’s men at 8/15 to win this one following the crucial dropped points, with the Seagulls at 19/4 to win and a draw currently set at 16/5.

Sunday’s loss could prove costly in the race for the top four this season, and the Blues are tipped to finish there over their London counterparts. Frank Lampard’s side are 4/9 to end their campaign in a Champions League place while Spurs are 2/1. Of course, there will be hundreds of betting options and variables to take advantage of between now and the end of the season and, as such, you could find all of UK’s top free bets in one place.

Meanwhile, Manchester United are thought to have an outside shot at 7/1 as it relates to a top-four finish, following a shocking loss to Watford on the weekend. Arsenal are farther away at 20/1, as are Wolverhampton Wanderers.