AS thousands are expected to flock to Edinburgh next week for the globally renowned Edinburgh International Festival to celebrate the world’s best artists and performers, visitors will also be welcomed by the city’s diverse history and culture.

Known as the Athens of the North, Edinburgh is a fast paced city, enriched by its ancient ruins and winding cobbled streets of Old Town, boasting a vibrant pub and restaurant scene.

It is comprised of various villages that have developed over time yet retained their charm and authenticity, whilst providing the breadth of entertainment of a capital city.

Edinburgh International Festival runs from August 8 – 31 featuring numerous plays, concerts, opera, dance performances, talks and workshops, and will be one of the highlights of Edinburgh this summer.

So, if you do chose to visit this beautiful city this month, as well as visiting the highly regarded festival that’s in its 67th year, make the most of the city's natural attractions and formidable heritage with this list of the top five things to do in Edinburgh. 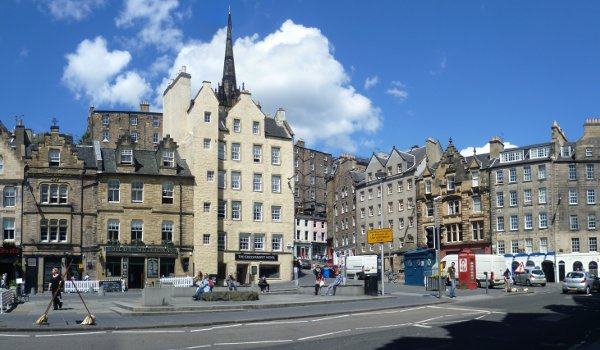 The north-east end of Grassmarket

Right at the top of the list is Edinburgh’s famous Grassmarket situated in the Old Town. To visit the Grassmarket is to experience an Edinburgh both past and present; it’s the very essence of the city.

Learn the history of Maggie Dickinson and the many other people who were hanged on this fascinating street, where street performers now work their trade and people sip coffee beneath the shady trees.

This historic Market place is poised at the foot of the castle and is one of Edinburgh’s best restaurant areas. Wander down the cobbled streets of The Grassmarket and grab a coffee or an ice-cream at one of the many outdoor cafes and bars such as Petit Paris or Biddy Mulligans. The buskers in this area are well-renowned and during the festival there are numerous performances to keep you occupied if people watching alone isn’t enough.

The Grassmarket is flanked with unique boutiques and restaurants. Armstrong’s vintage shop is a must-visit for any clothing enthusiast. The vintage behemoth has set the standard in Scotland since 1840, and with celebrities such as Kylie Minogue passing through the shops’ doors it’s one of the best vintage shops in Britain.

With old military uniforms, wedding dresses, ball gowns and Barbour jackets adorning the shop from floor to ceiling, you’ll be sure to feel like a child in a fancy dress shop once you enter.

If you’re planning on being in Edinburgh on a Saturday be sure to check out the Grassmarket market which features a variety of stalls from local crafts people, selling everything from vegan cupcakes to soap. There’s a great friendly atmosphere about the market and you can even chat to the people that produced the goods, which makes for an enjoyable shopping trip! 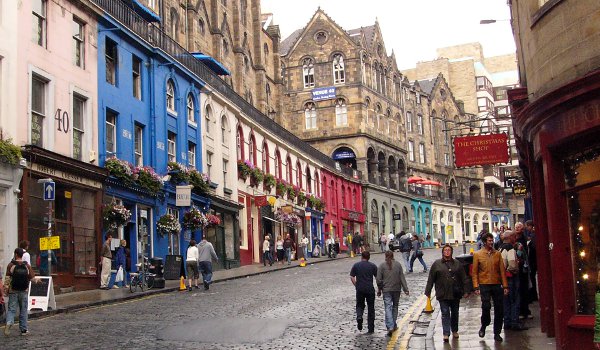 2. VICTORIA STREET AND THE ROYAL MILE

Close to the Grassmarket lies Victoria Street, the prettiest street in the city with its curving candy-colored row of eclectic shops.

Stop off at Oink Hog Roast to try one of the delicious freshly carved hog roast rolls on offer for a real Scottish treat.

Strolling up Victoria Street you can see where JK Rowling got her inspiration for her Harry Potter novels. The winding road nestled between shops on either side resembles something straight out of Diagon Alley.

If you head a little bit further up the street it’s no surprise then that you run into The Elephant House, otherwise known as the ‘Birthplace of Harry Potter’; JK Rowling began her writing career in the big, bright back room of this rambling café.

Hidden in the drawers of all the tables are letters of admiration to the novelist, love letters and inspirational quotes thanking her for writing the characters that we all know and love. This late night café can get busy during tourist season so it’s best to head there at off peak times or book in advance.

Beyond Victoria Street is the Royal Mile. This enchanting street is bookended by Edinburgh Castle on one end and Holyrood Palace on the other. The Royal Mile is the busiest tourist street in the Old Town, rivaled only by Princes Street in the city centre.

The stretch of road is well worth the walk from one end to the other, but unfortunately it’s a Scots mile long, which is about 1.12 miles in today’s system. Wandering between the tourist shops and impressive bridges, however, makes the distance feel much less.

This street is also prime performance real estate during the Fringe Festival in August where fire breathers and jugglers are common place.

Halfway down the Royal Mile is the Majestic St. Giles Cathedral. This 14th Century Cathedral is the principal place of worship for the Church of Scotland in Edinburgh. Inside the Cathedral is just as impressive as its outside facade, with its stunning stained-glass windows and Gothic architecture.

The café in the crypt of St Giles' Cathedral is a great place to grab lunch and offers stovies (slowly stewed meat, potato and onion, £6.50), alongside a daily Scottish special.

The National History Museum is situated just off the Royal Mile on Chambers Street. The museum is free and provides a great day out for families and individuals alike.

Explore the diversity of the natural world, world cultures, art and design, science and technology and Scottish history, all under one roof. The large spacious building is sure to contain something for everyone no matter what you’re interested in.

It’s important to give yourself enough time to explore this vast building. Many of the museum’s visitors do not make it up to the rooftop garden, which gives you some of the best views of Edinburgh.

If you’d rather take a guided tour the museum offers free guided tours by museum staff for groups with a maximum of seven people. While there is no entry fee, given the range of exhibits you might choose to make a donation to the museum instead. 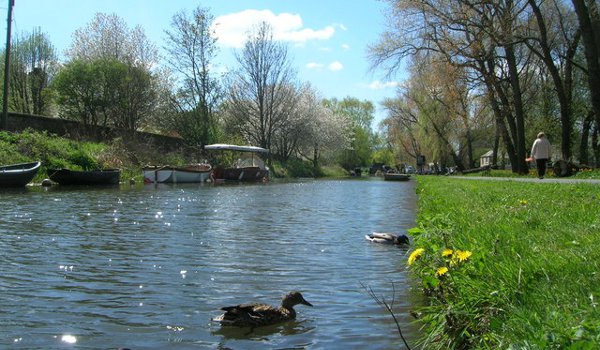 Edinburgh is situated at the end of the Union Canal which joins Falkirk to Edinburgh via Glasgow. The canal is a wonderful place to spend a sunny day in the city, either grabbing a drink at one of the many bars on offer or walking along its banks passed parks and playing fields. The easiest point of access to the canal is right in the heart of the city at Fountainbridge.

The canal stretches for miles and takes you right to the outskirts of the city. It’s a popular place amongst dog walkers and cyclists and is the ideal place for a morning run or stroll on your trip. It is a great place to go if you’re interested in water sports, with various canoe clubs and paddle boat rentals on the waterfront.

Barge boats are still a huge part of this scenic part of Edinburgh and each year hundreds of sailors bring their boats to moor next to all the wonderful bars and restaurants at Fountainbridge. Some of the barges have even been turned into lovely cafes that operate during the summer.

If you fancy getting in on the boating action you can rent barges for parties along the canal or even spend a night or two in your very own ‘boatel’.

Finish a busy day by exploring Edinburgh at the east end of the bustling Princes Street at sunset. This magnificent hill covered in monuments is included in the city's UNESCOWorld Heritage Site, and it’s easy to see why.

The hill is impressive visually as monumental structures cover its summit, most notably the Scottish National Monument. This monument which was intended to be another Parthenon and commemorate Scottish Soldiers killed in the Napoleonic wars, but sadly it was never finished.

Heading to the top of the hill is certainly a photo-opportunity, and after clambering up along the ancient walls it’s a magnificent sight to watch the sun go down on the city.

Whether you’re planning to come to Edinburgh for a ‘wee’ while or a long time you’re guaranteed to enjoy yourself and perhaps fall in love with the city in the process. From the winding Victoria Street to the windswept tip of Calton Hill, this city has something for everyone.

Edinburgh is the type of city that will draw you in with its friendly hospitality and awe-inspiring sights, and hopefully you’ll never want to leave.