“ARE you mad?” asked one friend when she heard about our family trip to Positano.

The Italian hot spot is world renowned and receives more than its fair share of visitors pacing its narrow streets throughout the summer and, in times of social distancing, were we sensible to even think about going for four days?

Ready to escape the UK for a change of scene, we jumped on the plane (masks on, hand gelled to an inch of our lives) and arrived in Italy with the hope of enjoying the good life it is so renowned for.

This was our fourth holiday to Positano in the last 20 years, having visited as a young couple in the nineties, for a friend’s 50th in 2013, and returning with our three girls last year en route to Puglia, yet even I was a little worried given the tiny town is not exactly cut out for distancing.

The transfer was the quickest we had ever experienced due to far less traffic on the windy roads – even in the height of August – and we arrived just over an hour later.

We opted to stay at Palazzo Murat, located in the centre of Positano, in the pedestrian area and just a one-minute walk to the Piazzetta dei Mulini, the Spiaggia Grande (main beach), and all the other main spots in town.

Steeped in history, it is said that when Gioacchino Murat, King of Naples, and brother-in-law to Napoleon, arrived in Positano in 1808 he visited the Palazzo, and it was love at first sight.

The hotel was the place where the king spent the hottest months, accompanied by his lovers, far from the intrigue and bustle of the Neapolitan court.

For us, we wanted it far from the bustle of the pandemic and it was the perfect choice. 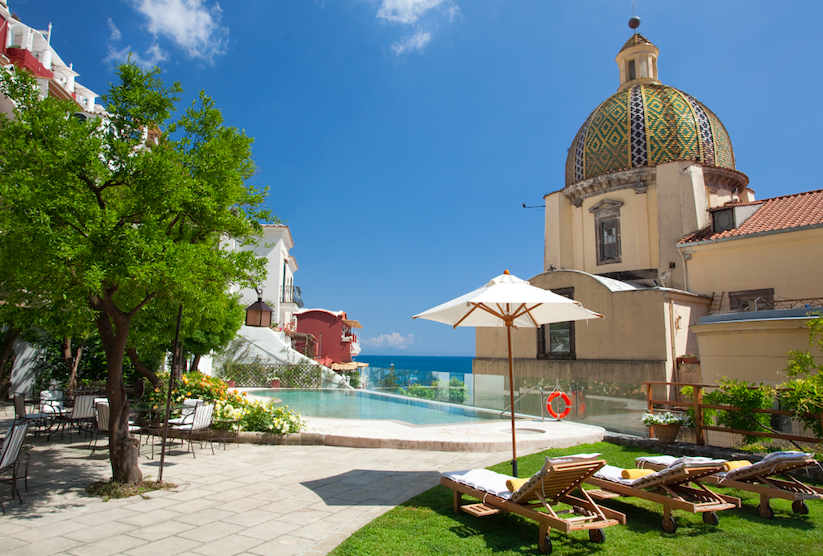 Poolside at the Palazzo Murat

On arrival, the hotel reception staff tested our temperatures and checked our passports and identity cards as part of the government’s new regulations.

Staff were positively excited to greet us – their season started much later due to Italy’s strict lockdown and business after August was patchy to say the least.

The small hotel has 33 elegant white rooms and suites, accented by the vivid colours of Vietri majolica while being sympathetic to the Palazzo’s design and architecture.

Rooms are gorgeous, spacious, chic and clutter free and most importantly, deep cleaned after each stay and are free from the usual hotel paraphernalia.

The hotel has lots of outside space – a beautiful terrace for breakfast, lazy coffees and pre-dinner drinks and a private swimming pool, surrounded by mandarin trees, set in a pretty garden.

Antonio runs the pool and poolside bar and greeted us with towels in plastic bags as part of the hotel’s new Covid policies.

We could finally relax, take a dip, savour the sea views and work out which of the colourful houses painted shades of pink, white and yellow we’d buy if we had the money.

Curious to see what Positano post-lockdown felt like, we ventured into the narrow streets – and were surprised at how much space we had.

The normal, bustling August crowds were nowhere to be seen, this was remarkable to experience and much more enjoyable than normal. 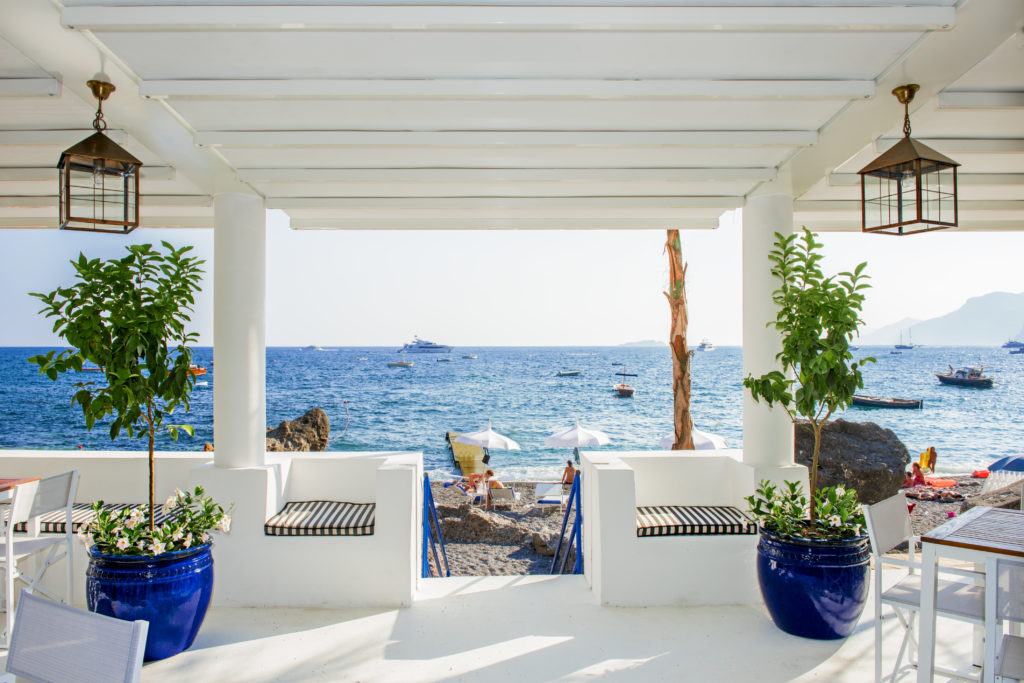 Treville Beach Club is a popular spot in Positano

Tourists had a newfound respect for each other, automatically creating a one-way system without any fuss – with the majority wearing masks while out and about.

The hotels, restaurants and shops in Positano are certainly suffering.

There are no Americans, Canadians, Australians or visitors from the Middle East who are the lifeblood of this coastal town and make up 80 per cent of its visitors normally.

Instead there are Europeans and the British have started to appear.

A restaurateur observed: “Positano has gone full circle and returned to the glorious hey days in the Sixties and Seventies when the town first got on the map and visitors started to discover its beauty.”

Founded in 1953 by sisters Giovannina, Adelina and Nannina, the restaurant is a Positano institution and known for its wonderful seafood, delivered straight from the sea in front of the restaurant.

On arrival, we were once again temperature tested, had to show our driver’s licence and provide a contact mobile number.

Post lockdown regulations are adhered to for fear of a €1000 fine for offenders. Restaurant owner, Luigi, nephew of Giovannina, is happy to be open even though they have had to remove half of their tables to allow social distancing.

Menus are now accessible on QR codes, although Luigi, in true Italian style, asked what we were in the mood for and suggested the mixed seafood for a starter followed by freshly caught red snapper served with potatoes and tomatoes – both sublime.

The restaurant even makes its own Limoncella, which finished off the meal in true Italian style. 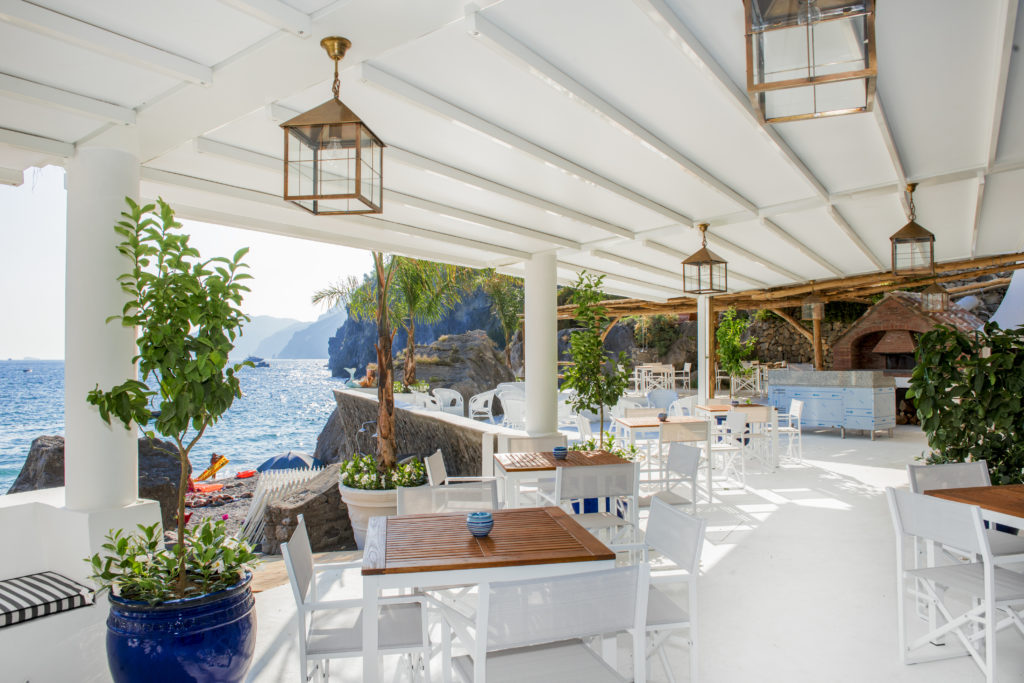 Lunch at Treville Beach Club is an entirely leisurely affair

The next day, we were desperate to go to the beach but worried about social distancing on the public beaches so we booked Treville Beach Club, part of the former estate of the famed Italian film director Franco Zefferelli.

This is one of the chicest beach clubs on the Amalfi coast.

We caught the free shuttle service from the harbour – both the boat’s driver and all guests were wearing masks – and arrived at the secluded beach where guests are normally greeted with an Aperol Spritz.

This time, the beach attendant was armed with a guest log and contact tracing forms and thermometer to test all our temperatures.

He told me that rows of beds had been taken out to adhere to the new regulations.

For us, we loved that we had more space to relax in and the vibe was still laid back.

A quick swim in the crystal blue Tyrrhenian Sea was followed by lunch in the beach club’s outside restaurant which served the freshest of seafood (tempura prawns, tubetonni with mussels, potatoes and zucchini flowers), delicious pizzas and a great selection of desserts.

Late afternoon, the restaurant transformed into a beach bar playing remixes of American folk music from the 60s to the 90s.

We just needed to call the masked waiter for our free boat ride home when we were ready.  Bliss, even with masks on. 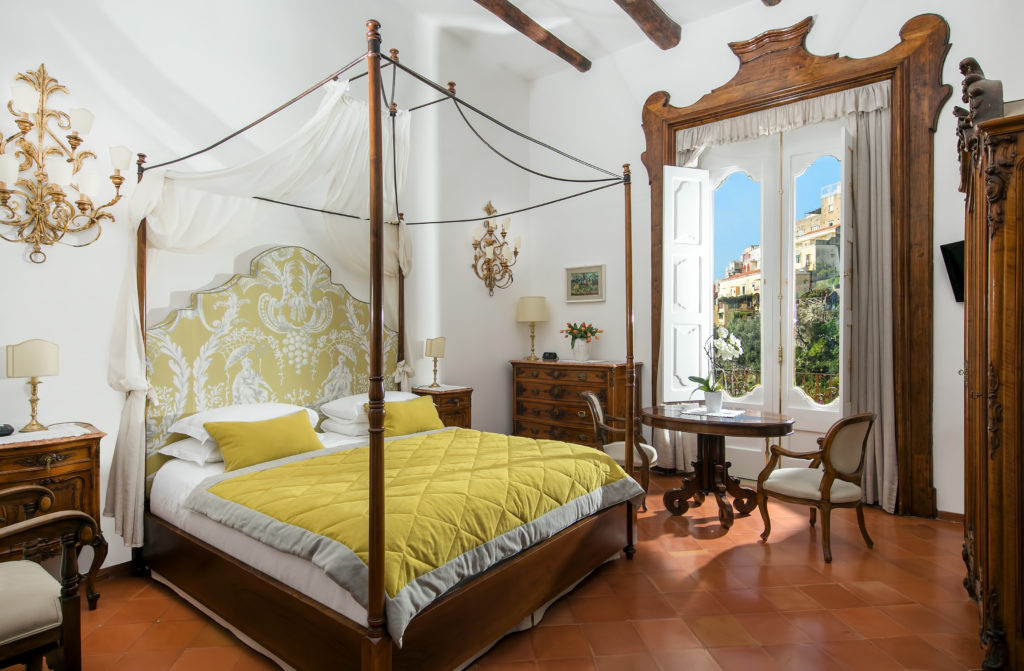 A Deluxe room at Palazzo Murat

We also enjoyed dinner at Palazzo Murat’s Next 2 pop up restaurant in its garden.

Next 2’s maître d said the season was undeniably harder but it has given the town a chance to reset and there is a distinct feeling of slower pace and the true Positano emerging once again.

Shopping in the narrow pedestrian streets was surprisingly relaxing too.

No queues outside shops, owners and shoppers respecting each other’s space.  Sandal shopping in the tiny squeeze of a shop Mastro Sandali went without a hitch and prices were affordable rather than extortionate.

Feeling happy that we made the decision to return to Positano, we wanted to celebrate our last night in style and opted for the ultimate experience combined with jaw-dropping views: dinner at Positano’s most famous hotel, Le Sireneuse.

On arrival, we were asked to put masks on throughout the hotel until we were seated and given chef Gennaro Russo’s menu.

The restaurant filled in as we dined on sea bass with candied citron, local lobster with court bouillon while the children had homemade pasta.

Mains were equally as impressive and included fagotelli pasta with local mountain beef, onions and aged parmesan and black truffles or the roasted local sea bream with eggplant caviar and leeks for mains.

Desserts were served as Positano’s clifftop lights turned on and ensured a spectacular evening became even more magical.

Four days went by in a flash and we departed this time feeling like we experienced the real Positano, when artists, curious adventurers and the well-heeled first visited in the Sixties and Seventies, with an appreciation for the simple life.

Post lockdown, Positano has reset and it was the best visit yet - and one we may never see again. La Dolce Vita in its truest sense.

CAR: a week's car hire including excess protection and free cancellation with Zest from £142.

SHOPPING: For shopping, visit Pepito’s one of the first boutiques to open in Positano in the early 1960s. Great for simple, elegant, sophisticated and professionally cut linens.  For more indulgent purchases, Emporio SIreneuse offers a stylish take on the dolce vita lifestyle and a chance to buy fragrance or a floaty skirts.  Theodora boutique it is also a great spot, offering trendsetting dresses made in Positano with top quality linens and lace.

The tiny squeeze of a shop Mastro Sandali is family run and offers beautiful handmade leather sandals with bespoke bejewelled accessories in all colours while you wait from Euros 85.  Carthusia boutique offers a range of fragrances all crafted in the neighbouring island of Capri, worth a visit – even with a mask on.  Famous fans of the label include Jacqueline Kennedy Onassis (who wore it on her wedding day to JFK) and Michael Kors.  Ceramics are everywhere, just bring a spare suitcase.

Guided walking tours of Positano and the surrounding area can be booked with Gabriella Russo.