shares 111
Share this article:
IF Boris Johnson claims that Election 2019 created an 'earthquake' across Britain, then the North of Ireland's electorate produced equally palpable aftershocks.
And not ones that he can ignore.
It certainly knocked his one time allies, the DUP off their feet.
Rarely has such political momentum been seen in the usually lethargic politics of Northern Ireland that it produces such unlikely alliances.
Previous sworn political opponents gave way to pragmatic pacts.  Ones which worked with dramatic results.
So much so that they left First Minister Foster and her party struggling to come to terms with their impact.
The sweeping away of hardline unionist influence in London by a frustrated Ulster electorate - and energised nationalist parties is seismic. 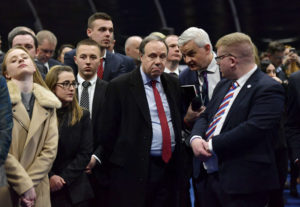 DUP Westminster leader Nigel Dodds reacts after losing his seat to Sinn Fein candidate John Finucane (Pic: Getty Images)
That the Alliance Party could bridge its way back into Westminster on the back of popular discontent with Brexit and unionism is a signal shock that nay-saying and stonewalling politics is no longer acceptable.
The North's self-rule at Stormont is now approaching 3 years in furloughed suspension.  But with salaries that continue to be paid.  Nice non-work if you can get it.
Ever noticed the rule that both Sinn Fein and DUP go out of their way to tag on lip-service at every interview to the desire of returning to devolution?
But still we are no nearer to Stormont returning as Tory austerity bites and the North's institutions' - and population's - health suffers?
Sometimes, salutary jolts from the ballot box is what it takes to get things moving.
Even Bill Clinton and Nancy Pelosi failed to charm the North's parties back to partnership during their Irish visits in recent times.
With the unlikely resurgence of the centre ground in SDLP and Alliance returning to relative prominence, comes renewed hope and optimism to increase the chances of that local Assembly getting back up and running, as per the Good Friday Agreement.
With the double-digit DUP previously being the sole and unrepresentative Brexit voice on the green benches at Westminster, three new and articulate MPs arguing the North's 'Remain' case will inject a fresh and welcome dynamic in London.
It will be tempting for hardline unionism to adopt a 'circle the wagons' approach in their unexpected post-mortem, post-election blues.
Arlene Foster's use of disturbing language such as 'pan nationalist front' which recalls a Troubles-era epithet used during the darkest days of the 1990s is certainly unwelcome and unwise.
But the cold light of day gives unionism an opportunity to respond to the expressed wish across the North's electorate for partnership and modernisation in 2020.
Both have been a long time coming.

Can peace prevail on island of Ireland despite Unionist politics?