Beauty, history and cultural significance all in one - follow the Star Wars trail in Ireland

THE eagerly-anticipated Star Wars - The Last Jedi was extensively filmed in Ireland, from the westerly outreaches of Co. Cork to the northerly tip of Donegal.

Luke Skywalker, C-3PO, BB8, Rey et al, accompanied by cast, crew, Jedi and Droids, fetched up on the shores of Kerry, Cork, Clare and Donegal to act out the epic goings-on for the much-anticipated Hollywood film.

Star attraction amongst shooting locations was Skellig Michael or Sceilig Mhór, as well as nearby Ceann Sibeal, the western headland of the Dingle Peninsula, and full details of the Star Wars highlights from the region can be found at www.ireland.com/starwars.

Of course this is not the first time that the film franchise has come to the island, as Star Wars - The Force Awakens was also filmed in Ireland - with the cast and crew jetting into a little town called Portmagee in Co. Kerry, along the Wild Atlantic Way, while filming the blockbuster. 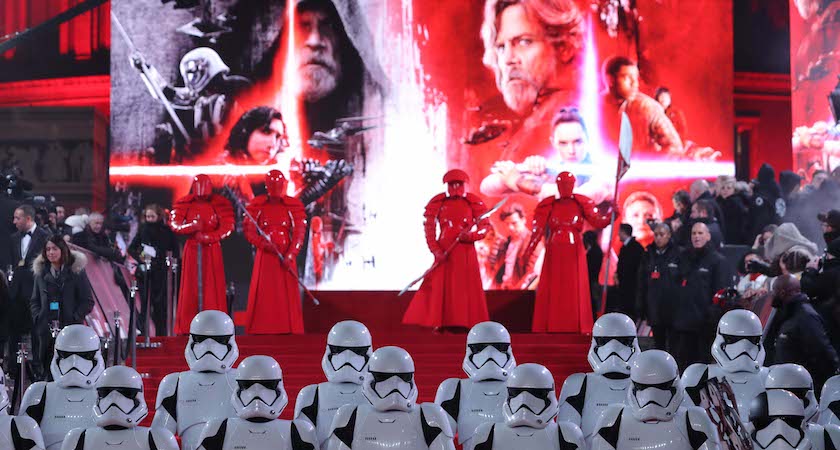 Stormtrooopers and Praetorian guards pose on the red carpet for the European Premiere of Star Wars: The Last Jedi at the Royal Albert Hall in London on December 12 (Picture: Daniel Leal-Olivas/AFP/Getty Images)

A monastery and monks’ stone quarters sit atop this, the larger of the two Skelligs, and is regarded as one of Europe’s great Christian sites.

The Skelligs are one of the very last outposts of the European continent, and getting there is half the fun — or adrenalin-rush.

Once having negotiated the voyage out to the islands, landing can be very dicey. Even if the weather is calm and your boat moors safely, then a steep climb up a staircase needs to be negotiated before you reach the monastic settlement at the top.

The monks left around the 12th century, leaving the island to the ravages of nature. Today Skellig Michael is the des res of thousands of sea birds. It’s estimated that some 40,000 gannets live here, alongside puffins, guillemots, Manx shearwaters and storm petrels.

You can see them all — even without putting your anorak on or fetching your binoculars.

The presence of such a high profile film naturally gave a huge boost to the tourist industry, but the fragile beauty and cultural significance of the area was preserved. After intense campaigning, Hollywood and heritage reached agreement, and wildlife and cultural concerns allayed.

The narrow peninsula at the mouth of the Shannon affords fantastic views of the heaving ocean. Huge Atlantic rollers, with three thousand miles to pick up speed, smash into miles of sheer granite cliffs.

A natural stopping off point is Loop Head Lighthouse. One of Europe’s most westerly lighthouses. From here you’ll get stupendous views of the Kerry Mountains in the far south, the Aran Islands to the North, and behind them the Twelve Bens of Connemara. 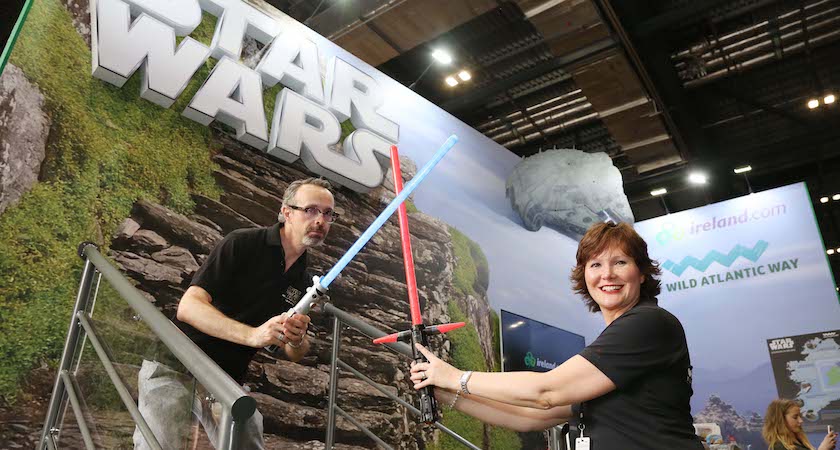 The Star Wars crew then made their way back to Kerry. The Dingle Peninsula is well used to being a film location. Previous credits include Ryan’s Daughter, The Playboy of the Western World, The Field and Excalibur.

Filming for Star Wars focused on a spectacular headland called Ceann Sibéal (Sybil Head) in Ballyferriter. The cliffs on this part of the Dingle Peninsula, such as Sibéal, have a sheer drop of nearly 700 feet. Visitors are duly warned that the rocks are very dangerous.

But if you’ve watched the destruction of a Death Star or witnessed the fall of the Galactic Empire, even the vertigo-inducing cliffs here probably pose no real threat.

Doubtless with one last lingering look at the panorama here, which include spectacular views across to the Great Blasket, the lightsabers and blaster pistols were packed up.

Crookhaven is a remote village, but protected from the full ravages of the Atlantic by the shelter of Streek Head.

The Peninsula on which Crookhaven is situated forks into three heads – Brow Head, Mizen Head and Three Castles Head.

Brow Head is the most southerly point of mainland Ireland, even though you may have thought it was Mizen Head — to be honest, there’s not much in it.

But this whole area is so ethereal that it is no surprise that is such a popular film location.