IF you’ve ever spent time in Ireland during election season you won’t have missed the thousands of political placards littering the country’s roadsides.

London-based photographer Mark Duffy was on a visit home in 2014, when one in particular caught his eye. It became the inspiration for his debut book Vote. No1.

“I happened to see this one picture of a face dissected on the side of a car and it just looked so horrendous and hilarious and I just thought, how did someone not think, this would look absurd?”

“Growing up in Ireland I was used to seeing these images around election time, relentlessly smiling faces looking down at you. I went home for a visit, and these posters were everywhere I just found them hilarious and disturbing at the same time.”

The book is a photographic study of the Irish approach to political advertising.

Scroll down to see a selection of the posters...

“I happened to find another poster of a woman with a plastic tie through her throat, so perfectly placed that it looked intentional, and I just thought, this is brilliant.”

Duffy ended up back in London with a handful of images and set about making them into a book.

"It was originally a visual thing, more than any kind of political point, but it seemed appropriate given the mood of the Irish electorate at the time." 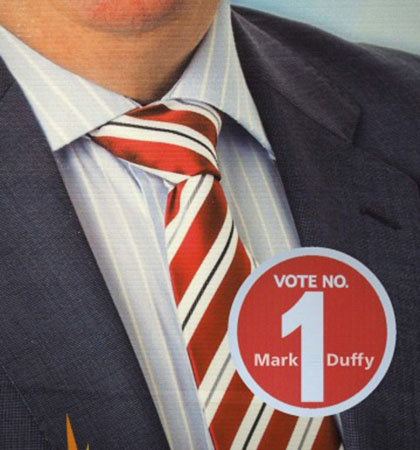 Talking to Galway born Duffy, he is keen that the images speak for themselves, reluctant to tie his own political flag to the mast.

“I’m guess I’m presenting the pictures but not really saying too much about them. It’s open to interpretation that’s the great thing about it, and it can start a debate and get people talking, get people to express opinions that maybe they didn't realise they had to begin with.”

The book launched in the UK on January, 28 at The Photographer's Gallery in London's Soho.

At the Dublin launch Irish MEPs Brian Hayes and Marian Harkin, who appear in the book, were both present, signing and posing for pictures with their own images.

“The politicians that I’ve spoken to so far have taken it very well. It wasn’t a case of me manipulating images it was me just photographing images, as I happened to find them on the street.”

Duffy is also aware that the exhibition and book could make people think about the environmental costs of political advertising.

“It might give them something to think about when it comes to the putting up of posters, they might think about the way they put them up, but really they should be thinking about whether they put them up at all. The amount of resources that go into these things, it's horrible.

Mark Duffy's first book Vote. No1 is published by AnzenbergerEdition and can be purchased here, see the pictures below...

ABBA reunite in London for launch of virtual Voyage show