Wexford-born Declan Lowney came to London in the late ’80s and has since forged a career as one of the TV industry’s most-sought after directing talents.

With his first major film, Alan Partridge: Alpha Papa, out earlier this week, Katy Harrington asks how he went from messing around with a Super 8 camera to directing comedy and musical superstars.

“I CAN’T get comfortable on this f*cking thing,” says Declan Lowney, beating the oversized cushions of an expensive looking couch in a swanky London Hotel suite.

Lowney, who has established himself as one of the most sought-after comedy and music directors in the TV business (U2 and Beyoncé ask for him by name), is sitting down to talk about his latest, and most high-profile film project to date — Alan Partridge: Alpha Papa.

Lowney is a distinctive looking man — tanned, outdoorsy, with a wild mop of curls of his head. He is easy-going, chatty and clearly enthusiastic about the new film.

Born and raised in Wexford, he discovered his directorial skills by chance.

When he was 11 years old, an uncle returned from a trip to America with a Super 8 camera under his arm and set up a club called the Wexford Miniature Movie Makers Society. He cast half the town in a feature film about vampires and Lowney was bitten.

“Bizarrely I had some sort of aptitude for it,” he says, now sitting comfortably on the couch.

It’s an old story that the creatively brilliant often struggle with academia, and Lowney didn’t buck the trend. “I failed my Leaving Cert miserably,” he jokes. “I was so f*cking bad, I did it twice.”

With hopes of attending university out the window, Lowney went straight to work in RTÉ as a trainee assistant film editor. “It’s a pretty lowly job… but I just wanted to learn film.”

In 1980, he made Wavelength, a 17-minute award-winning short film and by 24 he had worked his way up to a director. In 1988, he directed the Eurovision Song Contest, his swan song for RTÉ.

Intending to take a few months off, Lowney was poached by Channel 4 to come to the rescue of the music programme Wired. He started work the next day. Since then he has added an impressive who’s who in the music business list to his CV, working with Van Morrison, Lou Reed and directing countless Glastonbury Festivals for television.

It’s not surprising that music is in his blood. His father and uncles formed The Joe Lowney Showband in the ’50s and ’60s; Lowney’s father was the trumpet player.

When U2 played at Worthy Farm, they wanted to work with Lowney. “There was a lot of resistance at the BBC,” he says, but when U2 refused to give up the TV rights unless Lowney was on board, unsurprisingly, the BBC climbed down. 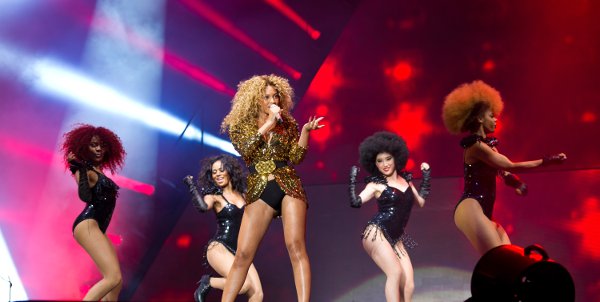 Beyoncé asked Declan Lowney to direct her headline slot at Glastonbury in 2011.

If that story isn’t starry enough, then Beyoncé comes in. When the singer heard about Lowney she asked him to direct her show-stopping headline slot on the Pyramid Stage at Glastonbury too.

While Lowney was in awe of Beyoncé as a performer, he was also worried because he knew what few others did at the time. “She was about 10 weeks pregnant at that stage and nobody knew… I was worried about her in those big heels on a wet stage.”

A music-lover he may be, but comedy is his real home. “I was much happier in comedy than I was in music,” he says, but his comedy career has been just as distinguished.

He started working on shows like Jo Brand’s Through the Cake Hole and then came the game changer — a job directing a new comedy show, by two Irish writers about three Irish priests, called Father Ted.

“Once it happened I thought ‘Bingo,’” says Lowney. A BAFTA followed and so did calls from film companies wanting to work with him but Lowney admits he didn’t feel ready for it.

His success might have felt overwhelming at the time, but there was more to follow including nominations and awards for Cold Feet, Paul Whitehouse’s series Happiness and a series of Little Britain. The adulation must be nice.

“I do love a BAFTA”, he laughs, and he has his eyes set on another. Winning awards might be “addictive”, but what he enjoys most is “watching the film with loads of people who get it and laugh”.

There are plenty of laughs in Alan Partridge: Alpha Papa, a couple of them aimed at the Irish. “The Irish gags are good, they aren’t anti-Irish. If anything they are about English people who don’t understand what the Irish are.”

In one scene a woman in a car won’t move when approached by a mad man with a gun. It’s only when someone yells “He’s Irish,” that she gets out of the way. The moment when the nuance between the F-word and ‘feck’ is misunderstood by Partridge is also brilliant, but I won’t spoil the joke.

Lowney isn’t the movie’s only Irish connection. Colm Meaney plays a lead role of the disgruntled old-timer, radio DJ Pat, and Simon Delaney has a few scene-stealer moments as a Northern policeman.

“Steve Coogan’s mum and dad are Irish and he loves Ireland,” says Lowney. In fact, it was while working on another Irish project, Chris O’Dowd’s Moone Boy, that Lowney and Coogan, who had a cameo in the show, first met.

“His Irish accent is superb, he had us all in fits,” says Lowney, who was thrilled when he got the call asking him to direct the Alan Partridge movie everyone was talking about. 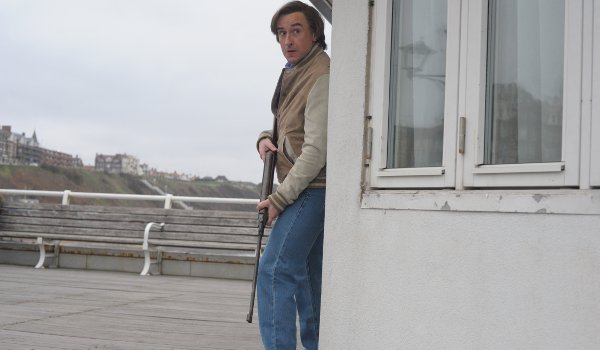 Musicians and comedians are not renowned for being easy to work with, so has Lowney picked a tricky path?

“There is a similarity in working with people who write and perform their own comedy and singer/songwriters who write a song and perform it. They have a vision of how the song should sound and it is better to do what they want, instead of just saying, ‘No this is how it is’.

They know their music better, he [pointing to the room next store where Steve Coogan is being interviewed] knows his comedy better than anyone else so he’s better placed to tell me how he thinks that scene should play.”

Lowney’s collaborative approach to directing is part of the secret of his success.

As a young runner he has seen the other extreme, the directors who scream and shout to get results. “There are directors with amazing control on the set but no one speaks a word… I don’t think you get the best out of people that way.”

So would he say that working with comedians is fun? “It’s not fun when they are having a great time messing around between takes and you are just trying to get the schedule shot on time.

"The pressure on the director is enormous… if this was a turkey they can blame the director… if it goes right, it’s the writing,” he laughs.

Other downsides of the job are the awful hours and while writers work in groups and actors work in a group, Lowney says the director is a lonelier role.

Since his mother and father passed away, Lowney sees less of Wexford, where he first picked up a camera. London, with his wife Jenny and two sons has been home for 25 years.

His son Ted was named as a tribute to Dermot Morgan’s most famous character in the show that gave him his big break. “We found out Jenny was pregnant the same day Dermot died, and I thought, ‘Ted’s a lovely name.’”

It’s time for a final question; I ask if, like an actor, a director is only as good as their last job, then what is next for Lowney?

The answer is he plans to take a break from TV, is still hungry for another BAFTA, but there is no question of what is next: “I want to do another comedy movie, the bug has bitten.” Looks like he has finally found his comfort zone.