THE first person to write a book documenting the huge contribution of Irish nurses to the NHS over the decades is about to start writing a sequel.

Ethel Corduff, who hails from Tralee in Co. Kerry, is the author of Ireland’s Loss, Britain’s Gain: Irish Nurses in Britain, Nightingale to Millennium.

The book, which was released earlier this year, is the first to document the history of the Irish women – and men – who came to Britain to train and work as nurses over many many years.

For its author it was a labour of love, one which took nearly 20 years to complete, as a part-time project undertaken around her work as a nurse in London.

Mrs Corduff admits she grew up wanting to be a writer rather than a medical professional, but nonetheless found herself leaving her hometown in Tralee, where she had worked as an assistant in her family’s shop, at the age of 22, headed for a job in the NHS.

She had no previous experience in healthcare but was bound for Staffordshire where she would join other young Irish woman to train to become a nurse.

“I am happy I chose nursing,” the 79-year-old told The Irish Post this week, “but I found it very difficult at the beginning If I am honest, and after three weeks I gave in my notice.”

“I just didn’t think I could stick it out,” she admits.

“I came to Britain and went straight into pre-nursing, which meant just arriving and going straight on the ward without any training,” she explains.

“I was put on a baby ward and we had to wear masks and the heat was so intense in there.

“I felt like all the other pre-nursing students knew more than I did, and it was true, they did, because they had always known they wanted to do nursing,” she adds. 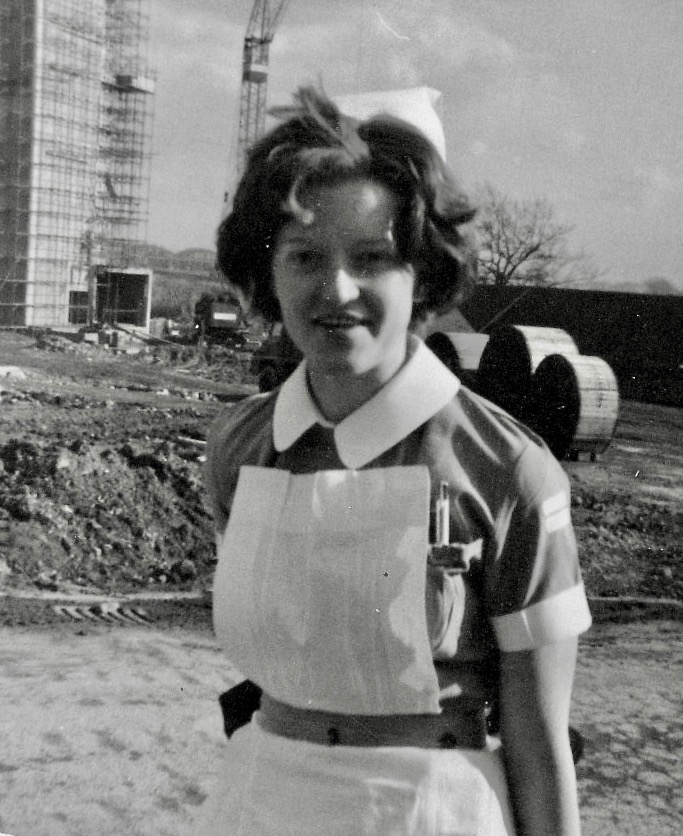 “I wasn’t like that, I had always wanted to be a writer, which, of course, back then, was not deemed a proper job for me,” Mrs Corduff recalls.

“I had to leave school at 15 for financial reasons. “At that time you had to pay for secondary education in Ireland and my family could not afford to keep me on. So I started working in my family’s shop, and didn’t leave for England until I was 22.

“And a lot of these girls I was training with when I got to England they had done their leaving cert, and had always wanted to be a nurse.

“So after three weeks of feeling like that I told the matron I was leaving – and she went beserk.

“When I went back to the nurses’ home I told the girls there what I had done and they went mad too.

“They said ‘you’re mad to leave, we all hate it but we have to stick it out’.”

Mrs Corduff remembers clearly that it was the lure of life in London that motivated the women she was training with - who were all Irish too, because the matron who had been to Ireland to recruit them was Irish herself.

“They were all Irish because the matron was Irish and they put us all together,” she explains.

“So we were all Irish in an area where there was not many Irish people living, but they all hankered to be in London, for the Irish dance halls and things.”

It was thanks to her fellow Irish women that Mrs Corduff changed her mind about nursing, a career she would go on to enjoy for many years.

“After one hour I went back to the matron and said I had changed my mind and of course she went beserk again,” she laughs.

“Looking back on it I think it was quite funny. She went beserk again but she let me stay, although she said, ‘if you stay, you cannot leave’.

“That would never be said now of course. But I did the right thing to stay, I really did.” 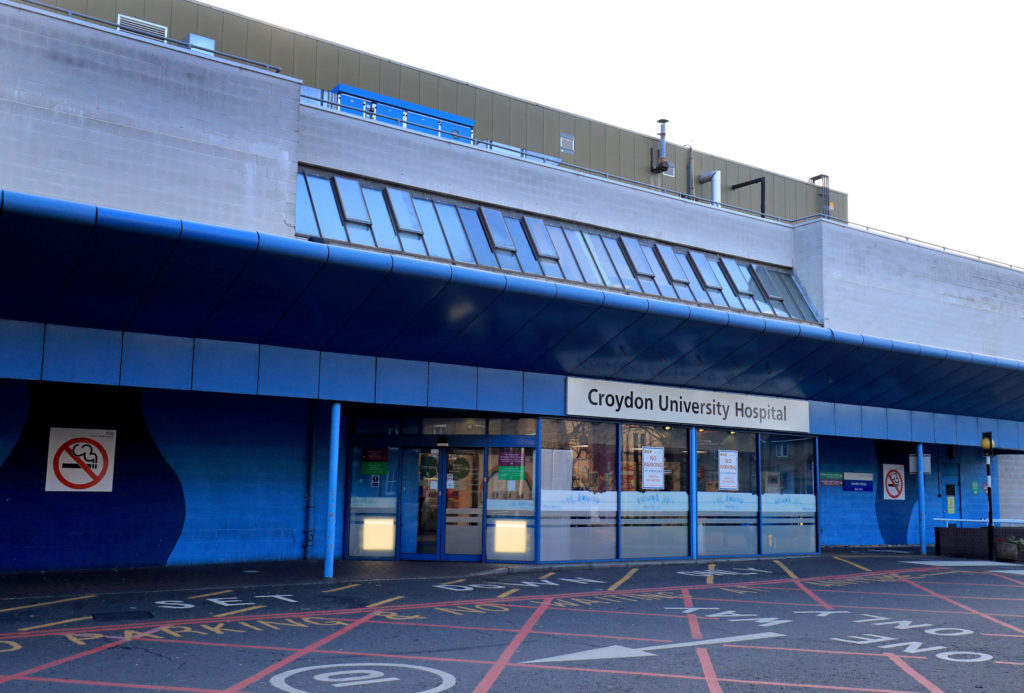 Mrs Corduff soon settled into her role and went on to make great friends in her profession, many who were Irish.

She moved to Croydon once she had qualified as a nurse, a decision inspired by a friend of the family she knew back in her hometown.

“When I was living in Tralee there was a pub across the road from us called Maloney’s, and Mrs Maloney said to me once that the Mayday Hospital in Croydon was the best hospital in England, as her daughter trained there,” Mrs Corduff recalls.

“So when I was in Staffordshire, I always had it in my head that I would go to the Mayday Hospital in Croydon once I had finished my training, on the back of what Mrs Maloney had said.

“Which I did, and I persuaded some friends to go there too.”

Mrs Corduff found her way to the Mayday Hospital`- now known as Croydon University Hospital – and would go on to put down roots in the area.

She met and married her Mayo-born husband there and they had three children, although one sadly died shortly after birth.

The family still lives in Croydon, where they now also have two grandchildren, and it is from there that Mrs Corduff enjoyed a nursing career spanning more than 40 years.

But her desire to write never left her and as the years passed she found herself inadvertently collecting research material regarding the Irish influence on the NHS that would form the book she would go on to publish.

And it was at home in Croydon in 2020, during lockdown, that that book became a reality.

“The book has been 20 years of work, actually,” she admits.

“I have always been writing, even from childhood, and had stuff published in various publications, mainly in Ireland.

“I was always interested in Irish topics, you know, and when I was on a nursing course and we had to write an essay I wrote an essay about nurses in the NHS, which made me think about the Irish nurses, so I did a few pages on that.”

That essay was the spark for the book, it led her to give talks and seminars on the topic of Irish nurses in Britain and, when she realised how little research there was on the topic, it prompted her to conduct her own.

“The more I looked into the topic of Irish nurses here the more interested in it I became, I started to look into it, started to put together chapters,” she explains.

“A lot was figures and statistics, which were not that readable, but I made 16 chapters and sent it to a printing company who liked it because it had not been down before, but they also wanted personal stories.

“So I went through it again, I did it better, I interviewed people.

“I interviewed people I worked with, sometimes in the middle of the night on my break I would go and visit other wards and get someone to tell me their stories and agree for me to use it, if necessary, in my book,” she adds.

“I got so interested in all of their stories, in the end the book became more about those stories.” 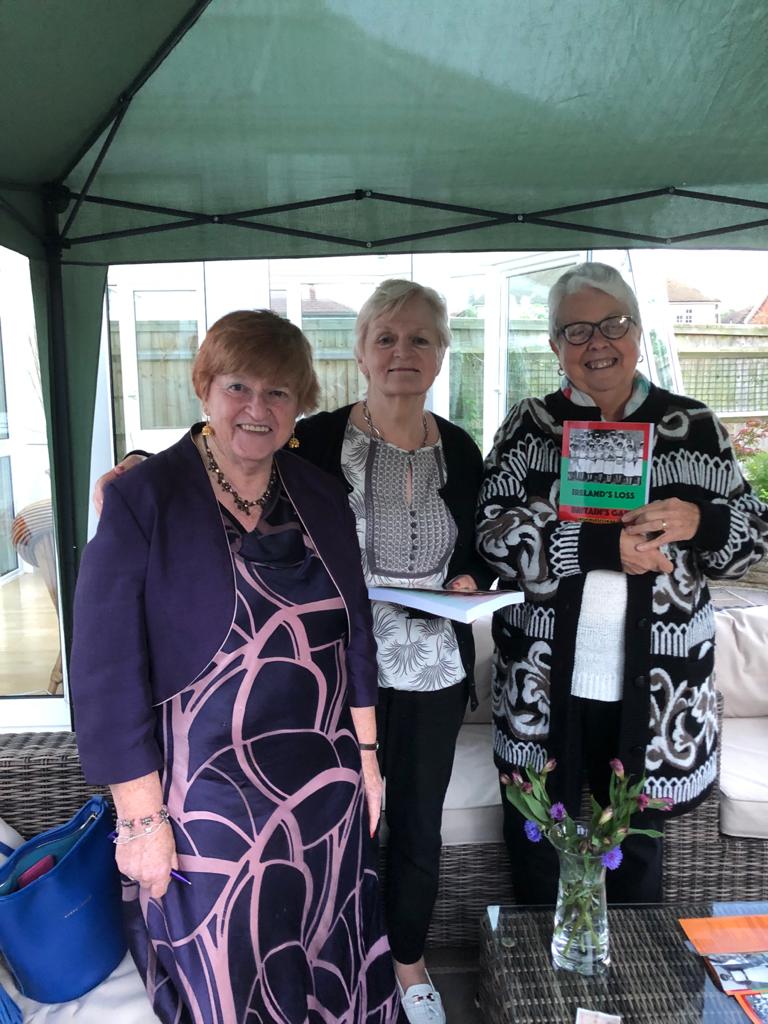 Ethel Corduff, pictured left, at a launch for her book earlier this year

But it was not until last year that Mrs Corduff finally pulled the book together.

“When we went into lockdown last year, that’s when I realised this is it I have to focus on this,” she admits.

“It meant going back through everything.

“I had to contact everyone I had ever interviewed – a few had sadly passed away - to check that they were still happy for me to include their stories in the book.”

She adds: “Lockdown was great for writing and for revising.

“The chairman of my local writers group has a small publishing group and is also a fantastic editor.

“He told me he would publish the book for me. So we Skyped about three times a week and worked together on editing it.

“Now he’s helping me to distribute it.”

Mrs Corduff’s book was finally released in July 2021, and has proved a hit.

Readers have been snapping up copies ever since – and showering the author with stories and snippets of their own experiences as nurses in the NHS, or that of their family members.

So good has the feedback been that Mrs Corduff is now preparing to write a sequel.

“People’s response to the book has been great,” she says.

“Lots of nurses are buying it and I’m now thinking about doing the sequel of personal stories, anecdotes.

“The personal stories I’ve been told, through some of the nurses now that have contacted me, well actually not just nurses, daughters of nurses too, they are great stories that should be told.

“And a lot of nurses who have bought the book have already agreed to take part in my next book, to tell me their stories, or their mothers’ stories, which is great.

“So the sequel will be the personal stories of the Irish nurses in Britain – that is a project for me in 2022.”