IT'S A GIRL: Irish beauty blogger posts live updates on Snapchat as she gives birth to her first child

A TOP Irish beauty blogger has documented the birth of her first child live on Snapchat.

28-year-old Grace Mongey will be a familiar face to beauty fans, having attracted tens of thousands of devoted online followers to her FacesByGrace blog.

But over the past nine months the Dubliner took a break from the world of beauty to share her thoughts and experiences as she made her way towards motherhood.

Over the past months, Grace has utilised the popular video sharing app Snapchat to share her pregnancy journey with her loyal devotees.

And yesterday (Wednesday, September 21) she shared images of her baby-to-be kicking in its final day in the womb.

"Baby wants out as much as we all want it out," Mongey wrote.

Grace promised fans that not even the birth would get in the way of documenting her pregnancy, and she didn’t disappoint. 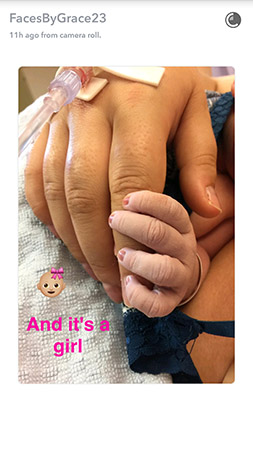 Going into labour on Tuesday, Grace kept her followers up to date right through to the big moment last night.

Mongey's followers weren’t treated to anything too gruesome, but were treated to a beautiful image of mother and daughter — finger in hand. 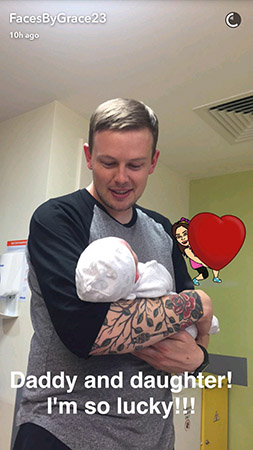 The happy father (Picture: Snapchat)
Grace also shared an image of the lucky father, sharing a precious look with his newborn daughter.

Fans of FacesByGraces will now be able to follow mother, father and daughter on the next step in their journey together.

Grace Mongey's story can be followed on her dedicated website, and of course Snapchat — at @FacesByGrace23.