EAMONN Keaveney is on a 2,000km trek around Ireland, in his bare feet.

Keaveney' began his epic journey on May 1, in his hometown of Claremorris, Co.Mayo. He hit the 1,000km halfway mark after 51 days.

Today, marks day 67 of his walk, which will take him from Ratoath to Bettystown.

Tomorrow, he will walk towards Dunleer; on Friday to Dundalk, and on Saturday to Newry. He will then continue up towards Belfast, around through Donegal, making his way back home to Claremorris.

The trek is an effort to both break the Guinness World Record for longest barefoot journey and simultaneously to raise money for Pieta House Suicide and Self-Harm Crisis Centre. So far he has raised over €12,200.

Eamonn is 23 three years old, he will turn 24 this Saturday while out on his walking adventure. 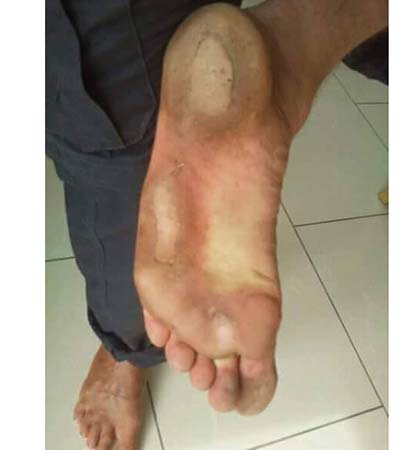 own to see pictures of Eamonn's amazing journey...

His sister Yvonne, a teacher who lives in Naas, Co. Kildare explained the rules her brother has to follow to The Irish Post:

"He is not permitted to wear shoes, socks, or even plasters on his feet while undertaking this challenge, unless he takes an official rest day. In any case, he hasn’t’ even packed any footwear in his bag. He is also unable to accept lifts from the many kind and perplexed passersby."

She continued: "We are overwhelmed by the generosity and support he has received from strangers along the way.

"At first, a lot of people didn't believe he would or could do it. I hope that now he has passed the halfway mark you will consider his efforts newsworthy. We are extremely proud of our brother. It is a fantastic feat."

Eamon's family are hoping that as well as raising money for charity, strangers might help him along the route. "He might get some friendly waves along the way, offered a cuppa, to charge his mobile/GPS equipment or even the occasional offer of a bed for a night as otherwise he will be camping out every night. We keep in contact every day, sometimes we or others join him, however, he is largely completing the walk alone."

You can follow Eamon's progress here  or donate here