POLICE in South Yorkshire have confirmed they are treating the death of battered Irish pensioner Tommy Ward as murder.

The 80-year-old was viciously assaulted in his house in Maltby, near Rotherham, on October 1, in an attack that left him hospitalised for the remainder of his life.

His life savings, said by Mr Ward’s family to be in the region of £30,000, have also been missing since the attack, South Yorkshire Police said.

The proud second-generation Irishman died on February 23, almost five months on from the assault.

“The post-mortem examination proved to be inconclusive and we are awaiting the results of additional tests to establish the exact cause of his death, to further piece together and uncover exactly what happened that night, however we are now investigating the incident as murder," South Yorkshire Police confirmed.

“It’s welcomed by all of us here, we've been wondering why it wasn’t upgraded to a murder enquiry earlier,” he told The Irish Post.

Mr Ward was discovered in his home of 35 years by his carer in the early hours of October 1 last year with horrific injuries from the assault.

He suffered brain injuries, a broken jaw and a snapped index finger that was later amputated.

After spending many months in hospital in Rotherham, he passed away on February 23 of this year.

An initial post-mortem carried out in February was inconclusive, meaning a second one has to be carried out at an unspecified date. 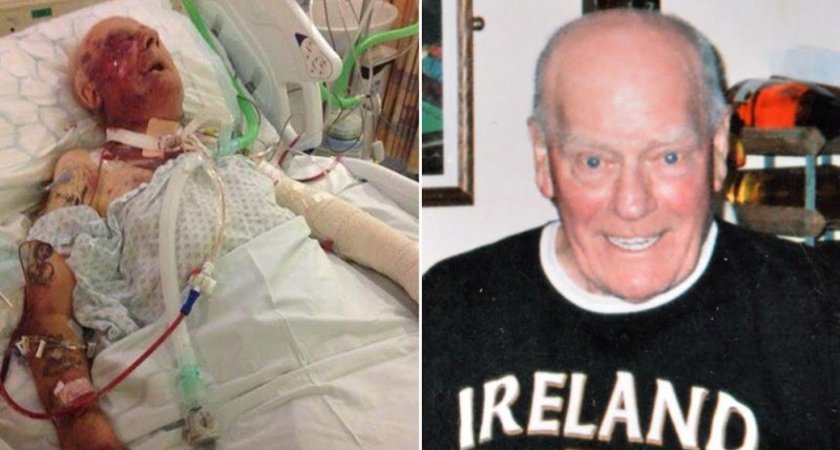 Tommy Ward before (right) and after the attack.

Until this process concludes, the Ward family are unable to lay Mr Ward to rest.

It has had an ongoing effect on the Ward family, Mr Bevan says, but they have no choice but to move on.

“It’s tough but they just have to carry on you know; life goes on so they’ve no choice but to get on with things,” he said.

“It’s affecting the whole family’s lives, there’s no closure. They can’t even plan a funeral so it’s difficult for them.”

Mr Ward, whose mother came from Co. Galway, was a regular visitor to Irish shores and was rarely seen in his local pub without an Irish hat or T-shirt on.

His daughter, Jackie Perry, told The Irish Post before his death that he spent his life savings bringing his family members on trips to Ireland.

“Tommy did not deserve this and his family have the right to know why their much loved father, grandfather, uncle, brother, was brutally attacked in his own home," investigation officer Detective Inspector Richard Partridge said.

“Whoever is responsible for such a vicious attack on a vulnerable man does not deserve to be shielded by anyone, and I would again ask, even if you feel your information is not that significant, please, make contact with us as the smallest detail could be vital to our investigation.”

Arrests have been made in the investigation to date but no charges have been pressed.

If you recall any information that could help officers, please call 101 or email [email protected], quoting incident number 408 of October 1, 2015