The Irish Post were proud to honour actress Anna Friel with the award for Outstanding Contribution to Television and Film at the annual ceremony on Thursday, 14th November.

The Rochdale-born actress with prominent Irish roots has just spent the past five months filming season 3 of Marcella in her father's birthplace of Belfast, and she gave the Irish Post audience some insight into life on the set of the popular show.

"We've just finished shooting Marcella," she told presenter Aoife Ní Thuairisg. "All in Belfast! It's set in Belfast and every cast member is from Ireland".

It's no wonder then that she praised the cast and crew of Marcella as being "the most wonderful crew I've ever worked with"-- but her Pushing Daisies co-star Lee Pace also got a special mention as she named him her favourite leading man due to the pair's close friendship.

The  actress has established herself with high-profile roles and famous storylines, but it was her Belfast-born, Donegal-raised father Dessie who she thanked for getting her this far.

Calling him "my hero", she told audiences at home and abroad that without her father "I wouldn't be here".

Ms Friel graciously described her happiness at being presented with the award for Outstanding Contribution to Television and Film, saying:

"I'm eternally grateful. I can't believe you've chosen me," she said, admitting that she's proud to "fly the flag a little" for Ireland. 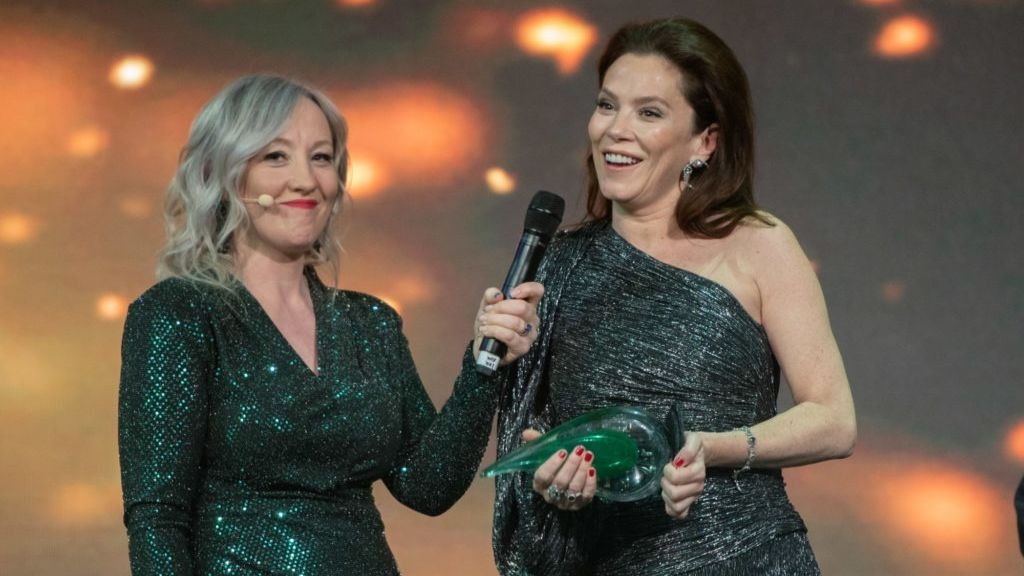 When asked if she would be celebrating the award win with a drink with her father, who was proudly seated in the audience, the Emmy Award Winning actress admitted that she gets nervous at award shows but that she might be tempted to have a glass of wine now that the collection was over.

"I get quite nervous at these things," she told Aoife Ní Thuairisg. "I didn't want to get up and trip over, these heels are hard to walk in! But maybe now I'll have a little tipple.

Speaking to The Irish Post on the red carpet before the celebrations kicked off, she described being both English and Irish as having "the best of both worlds".

"I'm proud of my heritage," she told Irish Post writer Jack Beresford. "Spending all my summers in Donegal and Belfast was wonderful".