A pair of gloves worn by Irish-born artist Francis Bacon has fetched £6,960 at auction this week.

The two left handed gloves, that Bacon wore while painting one of the most expensive paintings in the world - Three Studies of Lucian Freud, were expected to raise between £5,000 and £7,000 when they went under the hammer at Chiswick Auctions’ Fine Art Sale on Tuesday, June 7. 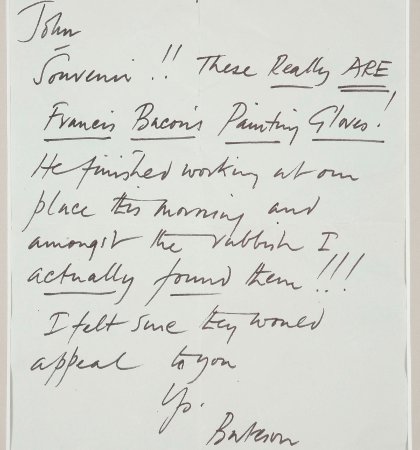 When the item came up at the busy London auction house, a bidding frenzy erupted in the room – with bids also being made via the telephone and internet.

They finally sold to an internet bidder, who it was confirmed was a private collector.

Jan Leman, the Chiswick Auctions specialist in charge of the sale, said: “We are delighted that we had so much interest in the gloves, from both private collectors and British institutions. However, it isn’t surprising, as they are a tangible link to one of the greatest artists of our time and wherever they go from here they will be treasured accordingly.”

He gifted the gloves to the owner who put them up for auction this week, accompanied by a hand-written note stating: “Souvenir!! These Really ARE Francis Bacon’s Painting Gloves! He finished working at our place this morning and amongst the rubbish I actually found them!!! I felt sure they would appeal to you. Yrs.  P.S. 2 left hands?”

Bacon was actually right handed, but as part of his standard studio method he would wear a glove on his left hand to clean his brush on as he worked.

The cotton elasticated gloves show an accumulation of oil paint deposits used in Bacon’s famous painting Three studies of Lucian Freud, which was sold for £89 million in 2013 at Christie’s New York.