THE BODY of Danielle McLaughlin is set to start its journey home today to Donegal as a man is charged with her rape and murder in Goa. 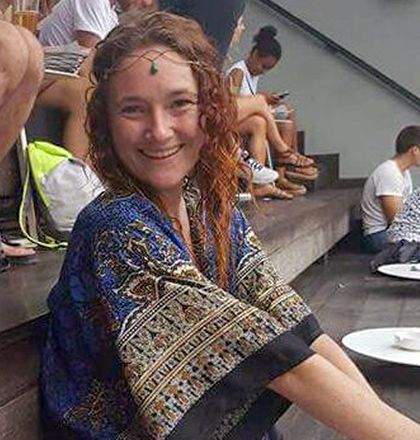 The family of Danielle McLaughlin have said they are finding her death "very difficult" (Picture: Caters)

Ms McLaughlin, 28, was found unclothed with marks on her head and face early on Tuesday morning, March 14, in a wooded spot in the popular tourist area of Canacona.

The young Irish woman, who was travelling on a British passport, was born in Glasgow but was raised in Buncrana, Co. Donegal.

She had also lived in Liverpool, having studied at Liverpool John Moores University in the city.

Ms McLaughlin travelled to Goa with an Australian female friend and the pair were staying in a beach hut.

They had been celebrating Holi – a Hindu spring festival – on Monday night at a nearby village.

She left the village late at night and her body was found the next day, Superintendent Umesh Gaonkar from Goa Police said.

He also said a suspect, a local criminal named Vikas Bhagat, was arrested a day after a farmer discovered Ms McLaughlin's body and that he would face rape and murder charges.

Deputy superintendent Sammy Tavares told local reporters that Bhagat, 24, had been arrested after he had confessed to raping and killing the victim.

CCTV footage has emerged of Ms McLaughlin's final movements in which she is seen apparently walking along a street with the suspect.

A two-wheeled vehicle and some clothes, reported to have bloodstains on them, have also been seized as part of the investigation.

Ms McLaughlin had updated her social media before departing for Goa "on another adventure".

Thank you to all my friends and family for making home so special and always looking after me. I am very grateful and the luckiest person I know...Off on another adventure...

Those who knew Ms McLaughlin have paid tribute to the young woman, who is survived by her mother Andrea Brannigan and four younger sisters.

In a statement following her death, the McLaughlin family have said they are “finding it very difficult".

“The family would like to express our thanks to all who have got in touch since receiving this awful news, as you can expect we are finding it very difficult at this trying time.

“Also thanks to the Irish and British consulate who, along with Colin from the Kevin Bell Repatriation Trust and many friends, have assisted at this time.

“Danielle will be sadly missed by all in our household.”

“There is nothing I need to say about Danielle as anyone who knew her, knew that she was a beautiful and kind-hearted, funny young lady who loved life and was a loyal and devoted friend, sister and daughter.

“They say the brightest stars burn the quickest and no other analogy could describe Danielle’s life better.”

The journey, expected to travel through Mumbai, Dubai, and finally Dublin can take up to six days.

Mr Duffy added that Ms McLaughlin will be accompanied by two friends who have travelled from Australia to Goa.

"Two friends who reside in Australia are currently travelling to Goa to meet with the body to accompany it for the repatriation process."

Thanking donors "from the bottom of my heart", Mr Duffy said it "has taken additional stress out of the equation, the family are holding up as well as can be expected and will be relieved to have her back on home soil."

Very sad to hear we have lost one of our old team members Danielle McLaughlin in Goa this week. She was only 28. Goodbye Danielle. Deepest condolences to her family in Ireland.

Fianna Fáil councillor for Buncrana Rena Donaghy told The Irish Post: “We are absolutely devastated here, the people are in shock. I live in a town where everybody knows everybody and Danielle’s family was a very well-known family in the town.

“It’s just horrific and so, so sad. It’s hard to believe and it’s hard to come to terms with an accident but this is even harder to comprehend, and the fact that she’s so far from home makes it all the more difficult.”

The Irish Department of Foreign Affairs and Trade has confirmed that the Irish Embassy in India is following up on the death of Ms McLaughlin in Goa.

A spokeswoman said: “It has been confirmed that the woman travelled to India using a British passport, so the local British consulate have the lead responsibility in terms of dealings with the Indian authorities.

“The Irish Embassy is liaising closely with the British authorities and an Irish consular official is travelling from New Delhi to Goa today.”

A spokeswoman from the British Foreign Office said they are supporting Ms McLaughlin’s family.

“We are supporting the family of a British-Irish woman following her death in Goa, India.

“Our thoughts are with them at this very difficult time. Indian police are conducting an investigation and we are in close contact with them,” a spokesperson said.

If you wish to donate to the fund For Danielle you can do so here.