BORIS JOHNSON looks set to terrify much of the UK and Ireland this Halloween – but it won’t be as a result of any Brexit plans.

The Prime Minister’s scheme to push through a deal confirming the UK’s departure from the European Union by October 31 is dead and buried.

It's good news for the island of Ireland though, with Johnson's plans for the so-called Irish border still far from fully ironed out.

In any case, the PM looks set for a Halloween to remember - and one parents, and kids alike won’t be forgetting any time soon either.

According to new research from Beano, a record number of children will be dressing up as Johnson this year.

A new study of 2,000 parents and their children aged 6-14 shows over half (54%) of families are drawing direct inspiration from Brexit for their Halloween plans this year with 28% dressing up as famous British politicians, and 20% using Brexit themed decorations.

Eight in ten (82%) children have said that they now prefer modern and pop culture outfits for Halloween over traditional costumes such as ghosts, witches and vampires.

The research has revealed the top 20 topical Halloween outfit choices for 2019 which features Boris Johnson alongside modern pop culture favorites including IT 2’s Pennywise, The Joker and characters from Stranger Things and hit video game Fortnite. 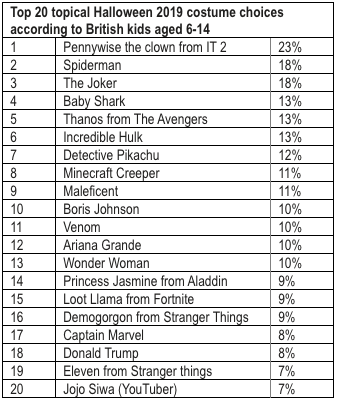 Johnson was also been identified as the second ‘scariest celebrity’ of 2019 alongside Jeremy Corbyn and Nigel Farage, as almost two thirds of kids (60%) admit today’s politicians give them the heebie-jeebies.

They all remained a distinct second to US President Donald Trump, who topped the poll. 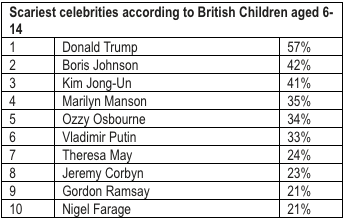 “Kids today are far more clued up as to what’s going on in the world and with Brexit on everyone’s lips, it’s unsurprising that we’ll be seeing a horde of mini Boris’ taking over the streets of the UK this Halloween, with a Jeremy Corbyn or two.”