A POTENTIAL cure for cancer may have been found in the US after a woman suffering from an “incurable” breast cancer that had spread to some of her organs was cured of the killer illness.

Judy Perkins, 52, had received a number of failed treatments when she joined a study trialling a new kind of therapy.

The new treatment finds T-cells that are successfully killing the patient’s tumours and manufactures billions of clones in the laboratory. Doctors then drain the defective white blood cells and inject the patient with the new super clones.

Ms Perkins had 62 mutations in her tumour cells. But after receiving the new treatment, her cancer - which had resisted chemotherapy and hormonal therapy - was annihilated.

After 42 weeks from the start of treatment she was declared cancer-free. Now, she has been in remission for 22 months.

The mother of two from Florida is enjoying having her old life back and working through a bucket list that she drew up in one of her darker days.

“My condition deteriorated a lot towards the end, and I had a tumour pressing on a nerve, which meant I spent my time trying not to move at all to avoid pain shooting down my arm,” Ms Perkins said. 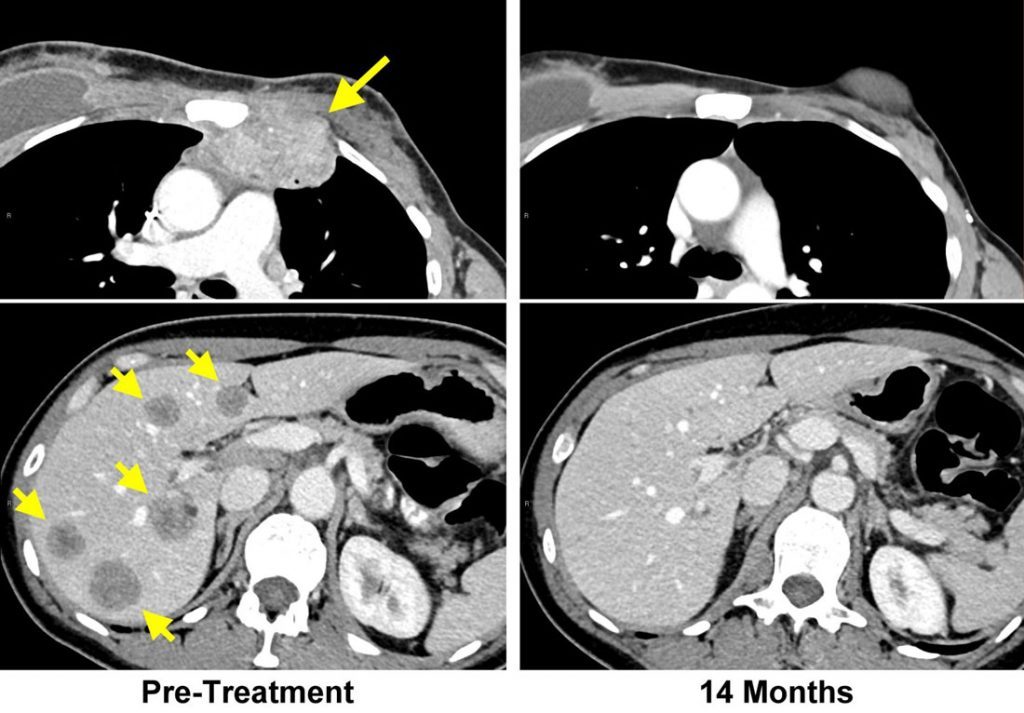 Before (left) and after (right). MRI scans show cancer invading and then being eradicated in the chest wall (top) and liver (bottom).

“I had given up fighting. I was planning on dying,” she added, “After the treatment dissolved most of my tumours, I was able to go for a 40-mile hike.”

Now cancer scientists across the globe are looking at how this new research - which was published in Nature Medicine today -  can be applied to any type of cancer.

Dr Steven Rosenberg, who led the trial by the US National Cancer Institute, said. “This research is experimental right now. But because this new approach to immunotherapy is dependent on mutations, not on cancer type, it is in a sense a blueprint we can use for the treatment of many types of cancer.”

But any miracle cure may be some way off, medical experts warn. The trial is in its early stages - with a projected closing date for the study pencilled in for 2023, it could be a while before medics can assume the new method is safe.

Simon Vincent, director of research at Breast Cancer Now, told The Guardian: “This is a remarkable and extremely promising result, but we need to see this effect repeated in other patients before giving hope of a new immunotherapy for incurable metastatic breast cancer.”

“It feels miraculous, and I am beyond amazed that I have now been free of cancer for two years,” Ms Perkins said.

“I had resigned my job and was planning on dying. I had a bucket-list of things I needed to do before the end, like going to the Grand Canyon,” she added. “Now, I have gone back to normal everyday life.”

Drinking a toast to your health will always kill you, new cancer research claims