CONOR MCGREGOR has accused Khabib Nurmagomedov of being “disrespectful” following his defeat to Dustin Poirier at UFC 257.

The Russian was among the first to comment on the Irishman’s shock loss, which came via a second-round knockout against his American opponent.

Nurmagomedov tweeted: "This is what happened, when you change your team, leave the sparring partners who made you a champion and sparring with little kids, far away from reality."

The UFC lightweight champion announced his retirement from the sport last year following a stunning victory over Justin Gaethje.

Prior to that, he defeated McGregor in a controversial clash in October 2018 that ended in a mass brawl with both fighters handed lengthy suspensions as a result.

This is what happened, when you change your team, leave the sparring partners who made you a champion and sparring with little kids, far away from reality.

Responding to Nurmagomedov’s taunts online, the Notorious used his post-fight press conference to call on the Russian to let his fighting do the talking with a rematch.

McGregor said: "My team has been the team since day one, I've not changed any team.

"It is what it is, respect the athletes and that's the character of the man for sure, behind the mask.

"Because he's not throwing any leg kicks. I got up off the ground against Dustin, I turned Dustin.

"Like I said styles make fights, every fight is a different fight.

"But if he wants to have his disrespectful comments come back and lets go again my man. I'm here for it.

"That's fighting talk so if you're coming back come back and you try and do it." 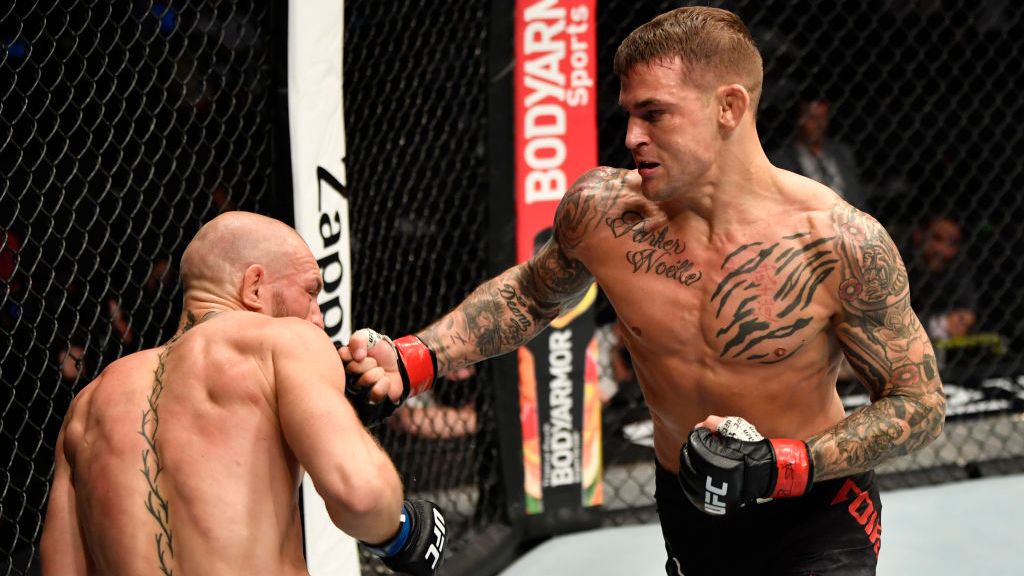 UFC boss Dana White is eager to the two fighters to meet again in the Octagon for what could be one of the biggest pay-per-view bouts ever witnessed in UFC.

In the meantime, McGregor is likely to face-off against Poirier again for what is being billed as a decisive third fight between the two.

The pair previously met in September 2014, with the Irishman securing victory inside two minutes.

Their roles were reversed this time around, with McGregor putting the defeat down to ring-rustiness and Poirier’s well-executed fight strategy.

Thanks for the support everyone! Was not my night/morning in there but a great contest to improve on. I’m excited at the blockbuster trilogy I now have on my hands. Dustin is a hell of a competitor and I look forward to going again. God bless us all, happy Sunday ❤️

McGregor said: "It's the inactivity and that's it. Dustin is some fighter.

"If you put in the time in here you're going to get cosy in here, I have to dust it off and come back and that's what I will do.

"I need activity guys come on, you don't get away with being inactive in this business and that's the way it is. I'll take my licks.

"I'm gutted, I put so much work in and it's a tough one to swallow. I put in a lot of work and I'm proud of my work.

"I would have liked to have represented my team a bit better but we get to go again and that's it.

"I'm going to go home to my kids at the hotel and just chill for a bit and regroup and that's it."