ONE of Ireland's greatest daughters is being celebrated 100 years after she was elected as Westminster's first-ever female MP.

Constance Markievicz, a staunch republican who fought in the 1916 Easter Rising in Dublin, became the first woman to win a seat at the British Parliament on December 14, 1918.

She was elected by the constituency of Dublin St Patrick's and beat her opponent William Field with 66% of the vote, as one of 73 Sinn Féin MPs.

The election of 1918 – in which 16 other women stood but all lost – was doubly significant as it also marked the first time women voted in a UK general election.

Countess Markievicz refused to swear allegiance to King George V to take her seat in the House of Commons, as part of Sinn Féin's absensionist policy to protest British rule in Ireland - which its MPs follow to this day.

She remained behind bars at Holloway Prison at the time of her election and was unable to attend the meeting of the First Dáil – the Parliament of the revolutionary Irish Republic – on January 21, 1919.

In Markievicz's absence, her colleagues in Dublin described her as being "imprisoned by the foreign enemy" ("fé ghlas ag Gallaibh") like many of those elected.

Following her release, she served as Minister for Labour from April 1919 to January 1922 and was re-elected to the Second Dáil in the elections of 1921.

Holding cabinet rank from April to August 1919, she became both the first Irish female Cabinet Minister and at the same time, only the second female government minister in Europe.

Markievicz, like Éamon de Valera, left government in 1922 in opposition to the controversial Anglo-Irish Treaty of 1922, which formed the Republic of Ireland and its 26 counties. 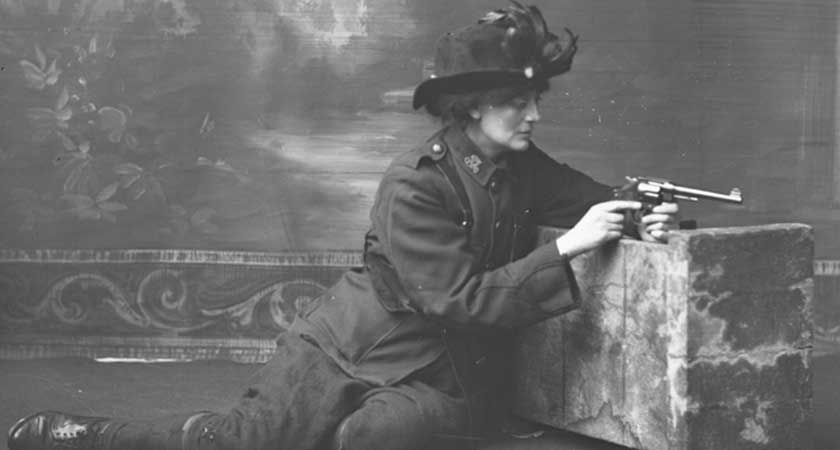 The Countess escaped a death sentence for her role in the 1916 Rising (Picture: National Library of Ireland)

After Civil War broke out, she was arrested but went on hunger strike and was released a month later. She joined the new Fianna Fáil party upon its foundation in 1926.

The Irish heroine died from appendicitis aged 59 on July 15, 1927 – just five weeks after being re-elected to the 5th Dáil as a candidate for Fianna Fáil.

Refused a state funeral by the Free State government, Markievicz was buried at Dublin's Glasnevin Cemetery with de Valera himself giving a funeral oration.

Her defining pledge was: "I am pledged as a rebel, an unconvertible rebel, to the one thing – a free and independent Republic."

Markievicz remained the only female cabinet minister in Irish history until 1979 when Fianna Fáil appointed Máire Geoghegan-Quinn as Minister for the Gaeltacht.

In July 2018, she was finally honoured with a portrait in Westminster, where she will be forever remembered for her courageous work.

When the portrait was hung earlier this year, Commons Speaker John Bercow said: "It is fitting that in the centenary year of the 1918 Parliament (Qualification of Women) Act, we mark the contribution of Constance Markievicz who, as the first woman elected to Parliament, holds a unique place in British and Irish history.

"The picture of Markievicz will now join the Parliamentary Art Collection: a testament to the past, and an inspiration to future generations."

At 1pm on December 28, the centenary of Constance Markievicz's election will be marked with a ceremony outside Holloway Prison.

Similar events have been taking place throughout the year to mark the 100th anniversary of votes for women in the General Election of December 14, 1918.

The 'Vótáil 100' campaign will also see Minister for Culture, Heritage and the Gaeltacht, Josepha Madigan, officially open the '100 years of Women in Politics and Public Life 1918–2018' pop-up museum at Dublin Castle tonight.