A UK court has been told no full investigation has ever been conducted into the 1974 Birmingham bombings.

The family members of those killed in the 1974 Birmingham pub bombings have told a court that there has never been a “full and independent investigation” into who carried out the attack which took the lives of 21 people and injured 182.

Ten of the bereaved families were at the High Court in Birmingham in a legal bid to overturn coroner Peter Thornton QC’s ruling banning the identification of suspects at fresh inquests.

The developments come after a mammoth legal campaign from the relatives of victims.

Today, the group in which the families of victims have been campaigning for justice, Justice4the21, confirmed to the court today that they have raised the huge £20,000 needed to pay for barristers to argue that suspects should be identified at the renewed inquest.

In opening submissions, the group’s barrister said: “There’s been no full and independent investigation into who was responsible.”

However, the coroner’s barrister suggested that the inquests were not the correct arena to consider who carried out the bombings, and risked turning forthcoming hearings into a “proxy criminal trial.”

He concluded: "Their aim is entirely legitimate and understandable. But it is not one that these inquests can achieve." 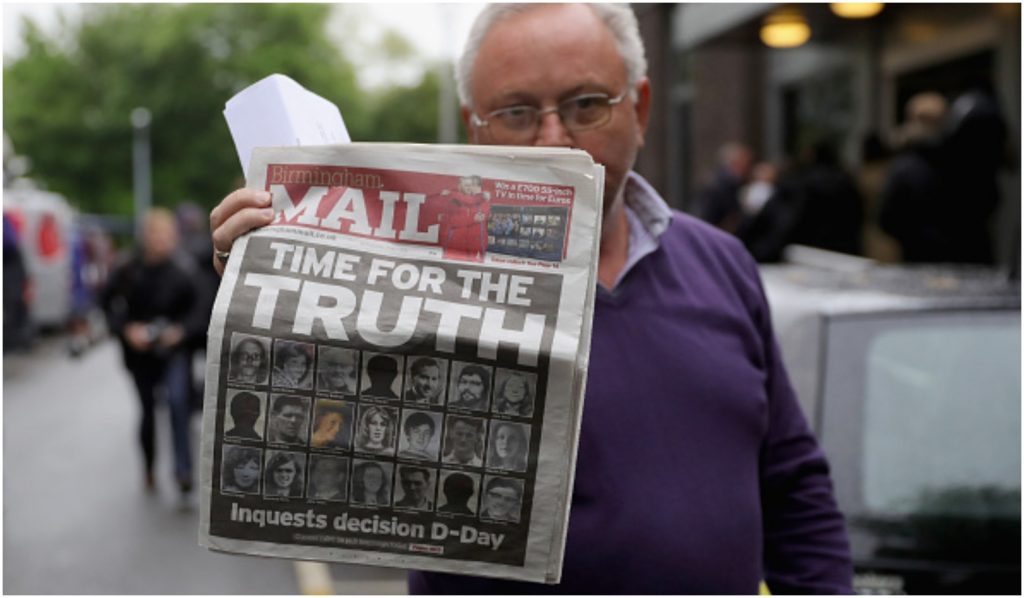 The families of the victims have campaigned for years for justice. (Picture: Getty Images)

The city centre double bombings were widely believed to have been the work of the IRA, and was considered the deadliest peacetime attack on the UK.

Six men known as the Birmingham Six were imprisoned for the murders and served 17 years behind bars before their convictions were quashed in what become known as a major miscarriage of justice.

Five West Midlands Police officers were charged with preventing the course of justice after it emerged the police investigation had been botched and used physical and psychological torture to extract false confessions.

The perpetrators of the murders have never been found.

In 1993, a judge ruled that a fair trial would be impossible at this stage.

The Justice4the21 group have been leading the struggle for a full investigation to be held for over twenty years now and today marks a huge milestone in their campaign.

The hearing will continue into tomorrow.

New inquests are on hold until the High Court justices deliver their ruling.

Some of the bereaved families said today that they would "no longer participate" in the inquests, without the perpetrator issue being included.

Article headline ammended on December 7 at 10.30am