FRANK HORAN, a founding member and former Chair of the Luton Irish Forum (LIF), has passed away.

Originally from Partry in Co. Mayo, Mr Horan came to Britain in 1955 and was one of the founding members of the LIF, which was established in 1997.

This week LIF trustees, staff and members shared their sadness over his death on July 20.

“We are deeply saddened to hear of the passing of Trustee Frank Horan on July 20,” they said. 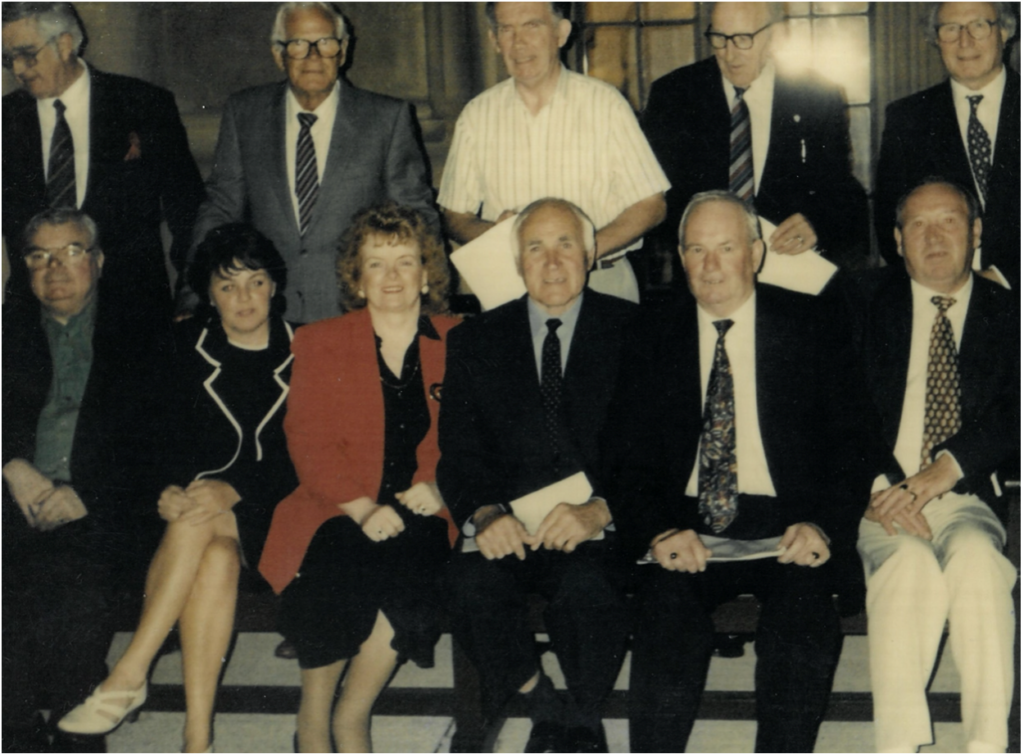 Frank, pictured with fellow founding members, at the establishment of the LIF in 1997

Current Chair, Tom Scanlon, added: “Frank was a great supporter and cultural champion since the establishment of the charity 22 years ago.  He will be greatly missed by his friends at LIF and the Luton community at large”.

Frank was interviewed by LIF volunteer Elleesa Rushby earlier this year, who captured his story as part of a collection of Reflections on the Luton St Patrick’s Festival by founder members of the Festival.

Here she shares her story of a man admired by many in the Luton Irish community and beyond:

He came to Britain in 1955; a journey he commemorated in his poem The Princess Maud.

It captures the mix of immigrant emotions and gives a voice to a collective but often ignored experience, balancing uncertainty and hope, in hearts already missing Ireland.

After arriving in London at Euston station, which he remembered as “the biggest shed I’ve seen in all my life”, Frank worked in a number of administrative jobs and found romance at London’s iconic club The Galtymore.

In those days no new homes were being built in London and it was very difficult financially to buy a house there.

Many Irish had to find accommodation in flats or sometimes just a single room - not an ideal space to raise a family, especially when moving to England had been in the hope of better prospects.

Frank settled in Luton, with his late wife Margaret, because he found it to be affordable and inclusive; a place where, “you’d get on with anyone; people of all descriptions”.

Frank was one of the founders who helped develop and grow LIF, which has developed welfare and support services for the Irish and contributed to the development of the Irish as a ‘respected’ community.

Frank feels positively towards the town of Luton, as it was a welcoming place that allowed the Irish community to flourish.

“Luton was an attractive employment opportunity,” he said.

“It gave the Irish an opportunity to bring up their family, get married and settle down. I met more people from Ireland here than when I was in Ireland, people from different counties in Ireland with different accents and associations.”

Frank brought with him a love of literature and language which is evident in his own poetry and in the artistic contribution he has made to the Luton St Patrick’s Festival.

As well as bringing considerable support in his time as a LIF Chair, he was responsible for introducing visiting Irish drama groups, performing classical and contemporary plays that reflect both the present and past Irish way of life.

The Irish love of language and storytelling is a huge part of our cultural tradition, as much as music and sport.

Through the visiting plays, audiences can revisit their own past and understand the dramas of Irish life.

For second and third generation audiences, these plays are full of the family you might meet on a trip back to Ireland or in often told family tales.

In that way, Frank has gifted us Irish culture and helped the diaspora process their own journey and changing identity in a new place.