On this day 20 years ago, the Good Friday Agreement came into effect

THE BELFAST agreement, also known as the Good Friday Agreement, was drawn up in April 1998, but it was well over a year before the treaty came into effect.

After the landmark agreement was signed by politicians including UK Prime Minister Tony Blair, Irish Taoiseach Bertie Ahern, Northern Ireland Secretary of State Mo Mowlam and Irish Minister for Foreign Affairs David Andrews, politicians still had work to do to ensure the people of Ireland recognised the agreement as a monumental step towards peace.

L TO R. Taoiseach and Fianna Fail leader Bertie Ahern with Senator George Mitchell and British Prime Minister Tony Blair at Castle Buildings Belfast, after they signed the peace agreement that will allow the people of Northern Ireland to decide their future. Photo: RollingNews.ie/Pool

Almost every political party across the island of Ireland supported the treaty-- however the DUP, led by Ian Paisley, abstained from peace talks and famously condemned the agreement as being "the mother of all treacheries".

Before the agreement could come into effect, political leaders needed the support of the people in both Northern Ireland and the Republic, and so two referendums were organised for May of 1998. 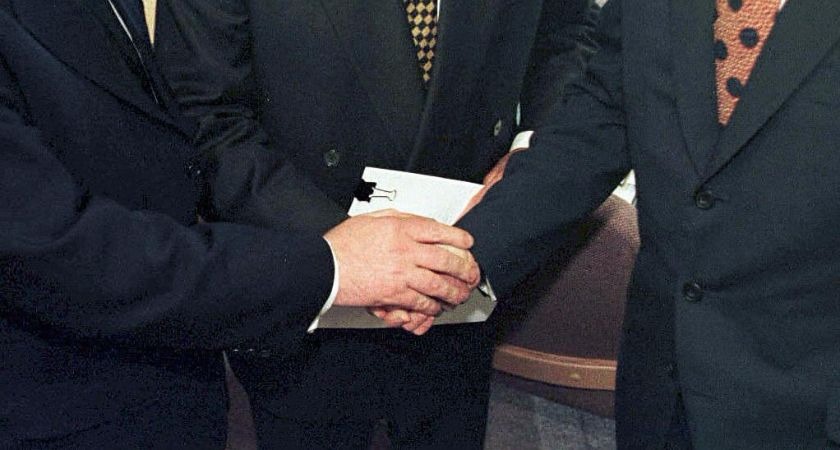 The referendum passed with 75% of Northern Irish voters in support of the agreement, compared with 95% in the Republic, and it was then time for  the people of Northern Ireland to vote and elect their new government.

But the peace process was marred with sectarian violence-- just four months after the Good Friday Agreement was signed, dissident republicans calling themselves "the Real IRA" detonated a bomb in the town of Omagh, killing 29 people and wounding 200-- the worst single incident in the entirety of the decades-long 'Troubles'.

As the weeks pass however,the peace process threatens to collapse: opposing policial parties refuse to work together, the newly elected Deputy First Minister Seamus Mallon resigns, and American George Mitchell is asked to return to assist with the peace process.

Finally, after the IRA promise to decommission and George Mitchell reveals a plan to re-secure the peace process, devolution seems to be back within reach, and Seamus Mallon is reinstated.

Monumental lesson in peace though it was, the devolved government that resulted from the Good Friday Agreement suffered massively from the deeply ingrained opposing views from both sides.

As it stands, Northern Ireland currently holds the world record for the longest period without a government.

In January 2020, it will be three years since the government collapsed, due to in part the mismanagement of hundreds of millions of pounds, rows over the proposed Irish Language Act, and the resignation of Martin McGuinness as First Deputy Minister.

The political parties have remained at an impasse since then, with no indication that powersharing will resume at any point in the near future-- but the Good Friday Agreement proved that nothing is, in fact, impossible.