THE BBC has defended its decision to broadcast a contentious joke about the IRA by comedian Frankie Boyle, amid backlash from senior DUP politicians and Tory peer Lord Tebbit.

The Scottish funnyman, raised in Glasgow by Irish Catholic parents from Co. Donegal, made the quip on his BBC Two show Frankie Boyle's New World Order last week during a segment about Brexit.

After poking fun at UK Prime Minister Theresa May's infighting with leading Brexiteer MPs in her own party, Boyle joked: "Where the f*** are the IRA when you need them?"

The comic, 46, went on to add: "All these groups that keep getting back together... what about the guys that would really help us?"

Lord Tebbit – the Conservative peer who survived the 1984 Brighton hotel bombing which left his wife Margaret paralysed – called on the BBC to ban Boyle over the gag.

Speaking to the Belfast Telegraph, the 88-year-old said: "The man should be banned from broadcasting on the BBC. What he said was highly offensive.

"IRA terrorist attacks are no laughing matter and the BBC shouldn't have him on television." 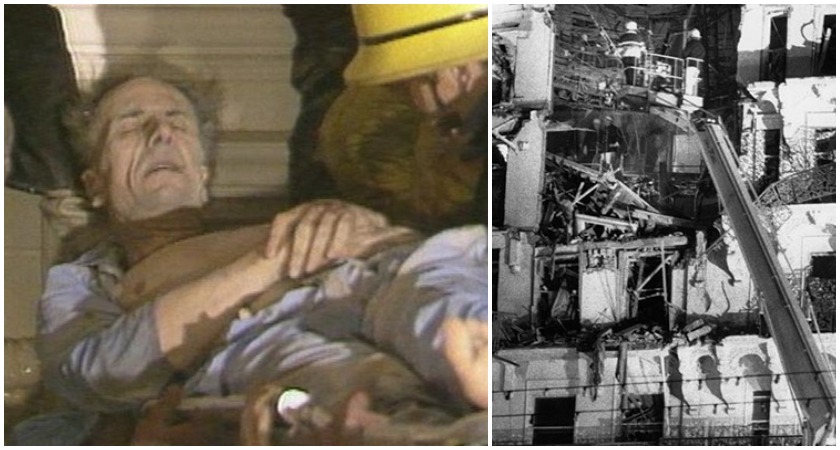 Lord Tebbit was pulled from the rubble of the 1984 Brighton bomb that left his wife paralysed (Image: File)

"This is not humour. It raises serious questions that the BBC broadcast such distasteful material."

Ulster Unionist MLA Doug Beattie added that the comedian's joke went "well beyond bad taste" and insulted Troubles victims on either side of the Irish Sea.

"If killing politicians is funny, perhaps Boyle's next joke will seek to find humour in the brutal murder of Jo Cox?" Mr Beattie said.

"Or if terrorist murders in general are a source of mirth, will he seek to mock the innocent people murdered by a terrorist fanatic in the two mosques in New Zealand the other week? Perhaps he thinks the IRA's murder of two young boys in Warrington in 1993 is a source of humour.

"Humour has always been part and parcel of how we have dealt with our troubled past. We have laughed at ourselves during some of the worst atrocities imaginable, but in doing so we never allowed that humour to focus on the victims.

The BBC stood behind its approval of the controversial segment in a statement today.

A spokesperson for the broadcaster told the Belfast Telegraph: "Frankie Boyle's New World Order was shown after 10pm on BBC Two and its content is within audience expectations for a post-watershed, topical, satirical programme from a comedian whose style and tone are well-established.

"Within the same programme Frankie clearly acknowledges the brutality of the IRA's activities."

Boyle has of course been no stranger to controversy over the years, having sparked fury on several occasions with acerbic gags aimed at everyone from Queen Elizabeth II to Katie Price's disabled son Harvey, and from Israelis to people with Down's syndrome.

In 2014, the BBC reportedly chose not to pick up a planned Radio 4 sitcom written by Boyle after he made fun of Lord Mountbatten – the Queen’s cousin who was killed by the IRA in 1979.

The broadcaster had previously backed the comedian through several controversies during his stint on Mock The Week from 2005 to 2009, but apologised in 2010 for a joke in which Boyle likened the plight of Palestinians to "a cake being punched to pieces by a very angry Jew" on Radio 4 panel show Political Animal.

Last year, Boyle accused BBC bosses of "editing out" comments he made on New World Order about Palestinian deaths on the Gaza border, as well as a joke about "Israel being an Apartheid state" from the same episode.