ANOTHER Northern Irishman has been arrested in connection to the 39 migrants found in the back of a lorry container in Essex last month.

The 23-year-old, was detained in the UK on the M40 in Buckinghamshire by officers from Thames Valley Police in the early hours of Friday morning.

Essex Police said he would be questioned on suspicion of conspiracy to traffic people and conspiracy to assist unlawful immigration.

A spokesperson for Essex Police, said: "A 23-year-old man from Northern Ireland was arrested by officers from Thames Valley Police on behalf of Essex Police in the early hours of this morning on the M40 in Beaconsfield, Buckinghamshire, in connection with our enquiry into the deaths of 39 Vietnamese nationals in a lorry trailer found in Grays on October 23.

"He was arrested on suspicion of conspiracy to traffic people and conspiracy to assist unlawful immigration, and remains in custody." 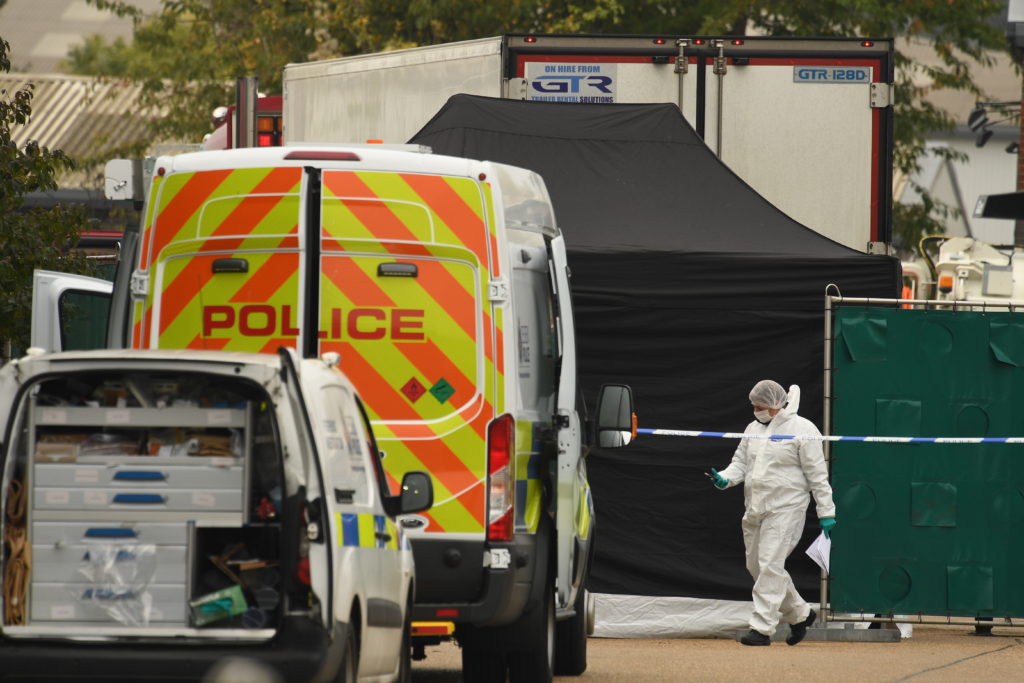 A Police forensic investigation team are parked near the site where 39 bodies were discovered in the back of a lorry on October 23, 2019 in Thurrock, England.

The driver of the lorry, 25-year-old Mo Robinson from Co. Armagh, was arrested at the scene. It was alleged that Robinson alerted authorities himself once he made the grizzly discovery of what had happened in his container.

He was later charged on 39 counts of manslaughter, conspiracy to traffic people, conspiracy to assist unlawful immigration and money laundering. and appeared before a Magistrate'a Court in Chelmsford, Essex in late October.

He's due to appear at the Old Bailey in London on Monday.

Police also started the extradition of a Co. Down lorry driver at the High Court in Dublin.

Essex Police is seeking the extradition of Eamonn Harrison, 22, a truck driver from Mayobridge, who is being held in the Republic of Ireland, according to the BBC.

He appeared at Dublin's Central Criminal Court on Thursday after he was arrested on a European arrest warrant in respect of 39 counts of manslaughter, one count of a human trafficking offence and one count of assisting unlawful immigration.

The court heard that the UK authorities say Mr Harrison drove the truck with the refrigerated container to Zeebrugge in Belgium before it was collected in Essex by Craigavon driver Maurice Robinson.

Detectives have also urged Ronan Hughes, 40, and his brother Christopher, 34, said to have links with the road haulage and shipping industries, to hand themselves in.

The pair, also from Armagh are wanted on suspicion of manslaughter and human trafficking.

Among the 39 dead migrants, who were from Vietnam, were eight females and 31 males. Ten teenagers, including two 15-year-old boys, were among the victims.