The site of the mass grave in Tuam, Co Galway. (Source: RollingNews.ie)

AN excavation is underway this week at the site of an alleged mass grave at a former mother and baby home in Ireland.

The excavation in Tuam , Co. Galway was ordered by the Mother and Baby Home Commission of Investigation to start on October 1 and last five weeks.

The site at the former Bon Secours Mother and Baby Home came to light in 2014 after it was alleged that as many as 796 bodies were buried at the site.

Here's what we know about the story so far...

In 2012 Tuam historian Catherine Corless was working on a local history project when she began researching St Mary's Home for Unmarried Mothers.

The home was run by the Bon Secours Sisters on behalf of Galway County Council from 1925 to 1961.

In the course of her research, Corless obtained death certificates for 796 children that died at the home.

But contrary to the number of death certs, there were only official burial records for two children.

It is not known where they were laid to rest

Corless says she interviewed elderly residents in the area who witnessed night time burials from upstairs windows in their homes that overlooked the eight foot walls of St Mary's Home.

Corless requested Galway County Council's records from 1925 to 1961 under the Freedom of Information Act, but was refused.

Instead, she was given documents from the 1970s including the official map of the present day housing estate the council built on the site.

She believes that the alleged mass grave could actually be in a nearby playground.

"They obviously didn’t see the importance, there is an area across the map marked 'Burial Ground'," she told The Guardian. “First, the houses were built, around that area. Finally a playground was built on part of the burial ground itself.”

No bodies have been exhumed from the site to date

According to the Commission, the purpose of this month's test excavation is to "resolve a number of queries" the Commission has in relation to the alleged internment of human remains at the site.

The excavation will focus on timeline and stratigraphy through the soil in test trenches dug based on information provided by a geophysical survey carried out in 2015.

The 2015 survey was conducted to detect the presence of any anomalies in the soil beneath the surface. It was carried out using non-invasive methods.

Senator and Minister for Youth and Children Affairs Katharine Zappone visited the site last Friday, in what she called an "emotional visit" on Twitter. Dhe also commended the Commission for making "every effort."

"I've met the Commission a couple of times," she told RTÉ News. "They've identified that many more people have come forward to give evidence to the confidential committee."

"[The Commission] have made every effort to ensure they will hear anyone who wants to come forward," she added. 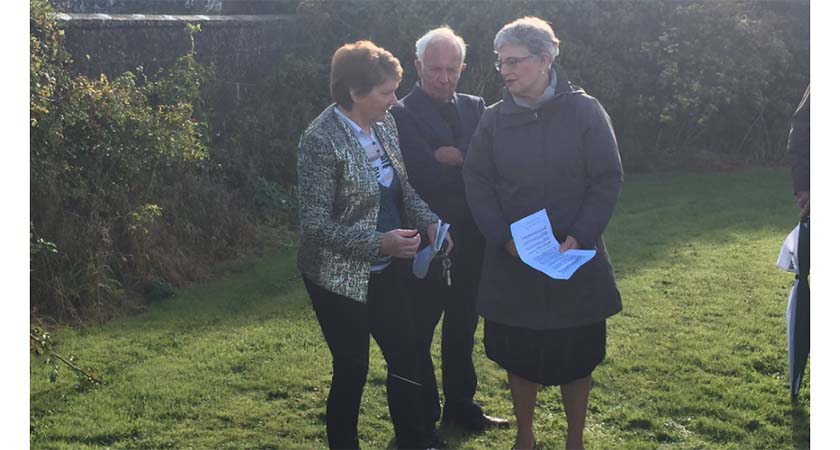 "We know there are children buried here, but we need solid evidence for the case to go forward," she said. "So hopefully this probe will show exactly where the burials are."

A full report into the investigation is not expected to be produced by the Commission until February 2018.

"It is my intention to publish the report after I have an opportunity to study it carefully and to consider its findings," Senator Zappone said.

"I am mindful that many people and their families have strong personal connections to the work of this Commission," she added.

The Commission of Investigation into Mother and Baby Homes was set up in February 2015 by the then Minster for Children and Youth Affairs, Dr James Reilly TD.