“BOOK yer flight, book yer flight!” was the cry from the upstairs bar at the home of London GAA as the Exiles ended their 38-year wait to book their place in the Connacht final against Mayo on July 21.

Fans from all over Ireland had gathered in Ruislip and at Tir Chonaill Gaels’ clubhouse in Greenford on Sunday and the celebrations rang out from all corners of the busy bars as London beat Leitrim by one point, 2-11 to 1-13.

At Ruislip, Tipperary man Andy Browne said of the result: “It’s a dream.”

His friend Sean Corrigan, from Co. Kerry, was confident he’d be making the trip over to the final.

Eoin Regan, also from Co. Kerry, was joined by pals Connor O’Keeffe from Cork, and Damian Delaney from Tipperary, in ecstatic celebration.

Eoin said: “It’s a great result for London. It’s brilliant. The quality of football and hurling that’s over here at the minute is great.”

The Ruislip bars were buzzing, but it was to prove a nail-biting finish after Leitrim rallied in the second half. Were supporters worried during Leitrim’s comeback, as the deficit was cut from five, four three, two, one...?

“Ah, we didn’t really play in the second half at all did we?” said Eoin.

“I think we only got one point, but to be fair to them they held out and did the job in the end. So thanks to the gods! There were a few Leitrim fans that were pretty upset in there.”

Earlier in the lounge bar, as London raced into an incredible 2-10 to 0-2 half-time lead, a scattering of glum Leitrim fans could be found outside making calls to home in disbelief, while Leitrim’s Lorraine Guckian may have felt a slight divided loyalty being cousin of London’s man-of-the-match Lorcan Mulvey.

As the final whistle blew, proud members of London GAA, along with staff and club members, came together to join in the celebrations upstairs in the function room while scores of London fans had made the trip by ferry to Hyde Park in Roscommon, along with families of London players based in Ireland and thousands more watching on television. 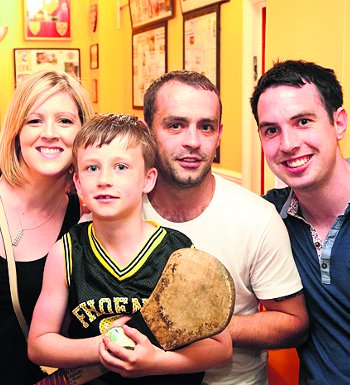 Seamus Gallagher, from Tara Club, was joined by Padraig Kelleher of Neasden Gaels GFC. The Sligo pair had cast aside any partisan rivalries to get behind London.

Seamus was at last Sunday’s game while Padraig didn’t waste a breath when asked if he’d be going to the final, saying: “I’m definitely going to be there.”

Asked if he’d expected the result, Padraig smiled: “I had a small bet on London at 7/4, which should pay for my dinner tonight!”

After the game, hurling man Martin Carroll, from Tipperary, and pals were in great spirits. Martin, who has been involved in London since 1986, said:

“It was a brilliant performance. We were all worried at the end, but it was amazing. An unbelievable effort from everyone. To go to Roscommon and win the game... it’s great for London GAA — the whole club. It really puts us on the map now.”

When asked if he would be at the final, to be held in Castlebar on July 21, the answer shot straight back: “I will be, oh yes!”

London fans count the cost of heading to the Connacht final