A GROUP of six people and a dog have been rescued by the Coast Guard during a late-night rescue in Co. Antrim.

A full-scale operation saw Coast Guard teams deployed from Coleraine and Ballycastle, before Rescue Helicopter 199 airlifted the party to safety.

The group had been exploring an area of the coastline that was well known to them.

However they were caught out by the rising tide and left stranded on rocks. 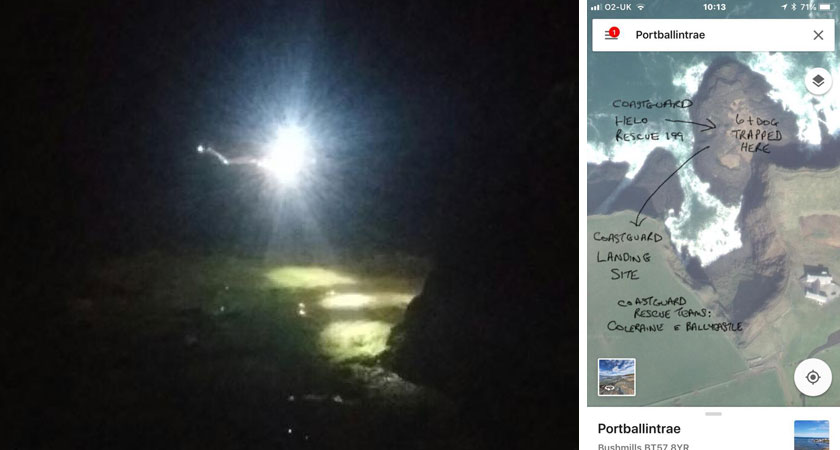 Helicopter 199 searches for the group and right, the scene of the rescue (Images: Coleraine Coast Guard)

One member of the party initially tried to wade to safety but was forced to turn back.

After waiting for three hours in the hope the tide would recede, during which they built a fire to stay warm, they contacted 999 at 1.30am.

A statement from Coleraine Coast Guard said: “The trapped party was quickly located by the Coastguard teams and their position was passed to the helicopter.

“A CG winchman was lowered to assess the situation and extinguish the fire, before the helicopter carefully manoeuvred and landed on the outcrop.

"All six casualties plus dog were then airlifted to the cliff top and given into the care of Coastguard personnel."

It added: “All were very thankful for Coastguard assistance and were taken home to recover from their ordeal.”