THE state funeral of Garda Anthony Golden has taken place in Co. Louth.

President Michael D. Higgins and Taoiseach Enda Kenny were among the thousands of mourners, including serving and retired police officers, who attended the funeral to pay their respects to the "charismatic" father-of-three who was killed by a suspected IRA man while on duty.

Garda Golden was shot dead on Sunday, October 11 by a man named locally as Adrian Crevan Mackin, a Co. Down native who was living in the village of Omeath. Co. Louth.

Fr Keenan began the service by reflecting on the silence of the water of the nearby Dundalk Bay. 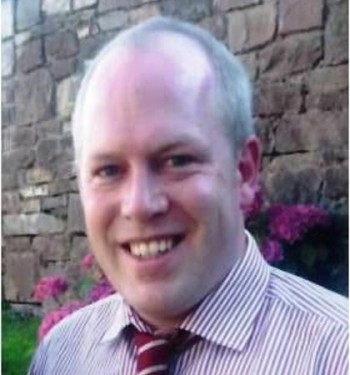 “It reflects the silence and sadness that has unfolded for all of us in light of the taking of Garda Tony Golden’s life on Sunday evening last. One cannot imagine the pain and hurt that is experienced by the loss of those who loved Garda Tony,” he said.

“Tony quietly let his light shine in so many ways through his life in a very humble way. Amidst our sadness may we be thankful for the charisma of his beautiful but too short life.”

Music at the Mass was performed by organist Brendan McCourt and soloist Sarah McCourt, who were accompanied by the Garda Choir.

Garda Golden’s brothers Kenneth and David gave readings from the Book of Ecclesiastes and First Letter of Saint Paul to the Corinthians, respectively. Loved ones including his cousins and friends gave further readings.

Fr. Keenan also spoke of how Garda Golden’s death was one of the consequences of the legacy of the Troubles, which follows a similar tragedy of a Garda murder several years previously.

“Garda Tony’s death once again reflects how North Louth and the Cooley Peninsula have been affected by the tragic history of the Troubles on the island of Ireland, and especially the murder of Detective Garda Adrian O’Donohoe, three years ago at Lordship Credit Union in Bellurgan,” he said.

“As one person from Omeath put it to me in recent days, he was 'our garda', and to a person amongst his family and colleagues, all are immensely proud of Garda Tony and his selfless nature – proud of everything he lived for, worked for and stood for.  Tony Golden was a much-loved role model in our community." 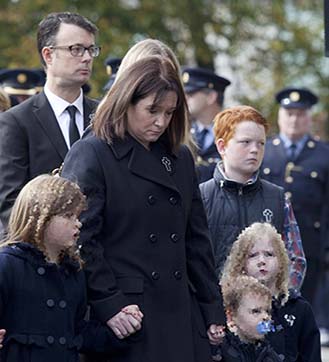 “Tony was one of life’s gentlemen.  As Patrick his brother said to me, 'A big gentle giant', a lovely man.  He had a charisma that was calm, gentle and polite, as reflected in our second reading.   Tony showed us a way to love that is better than anything else in life.”

Further details have since emerged of what may have happened at the couple’s house in Co. Louth where the shooting took place.

Media reports in Ireland suggest that Ms Phillips went to the garda station in Omeath on the Friday before the shooting to report that she had been assaulted.

She met with Garda Golden to make a statement on Sunday and afterwards, accompanied by the garda and her father she went back to her house.

Mackin, who was awaiting a trial for charges of IRA membership, is believed to have been at the top of the stairs with a gun.

He first shot Ms Phillips and it is believed Garda Golden moved to protect her and was shot himself in the process.

The 24-year-old then turned the gun on himself and pulled the trigger.

Ms Phillips’ father, who had remained outside in the car, is reported to have entered the house where he discovered his wounded daughter alongside the bodies of Garda Golden and Mackin.