The 'friendly fella' was found on the M50 yesterday morning (Image: An Garda Síochána)

GARDAÍ IN Dublin have launched an appeal to find the owners of a 'friendly' collie dog found wandering on the motorway.

The black and white pup was found on the M50 near Dublin yesterday morning, and Gardaí had hoped to return him to his owners as a special Valentine's Day gift.

However,more than 24 hours after he was found, it seems the pup has still not been reunited with his family, and the Garda appeal is ongoing.

Describing the adorable collie as a "friendly fella", a garda spokesperson said he was found by officers on the M50 and quickly taken to safety from the busy road and brought under their care. 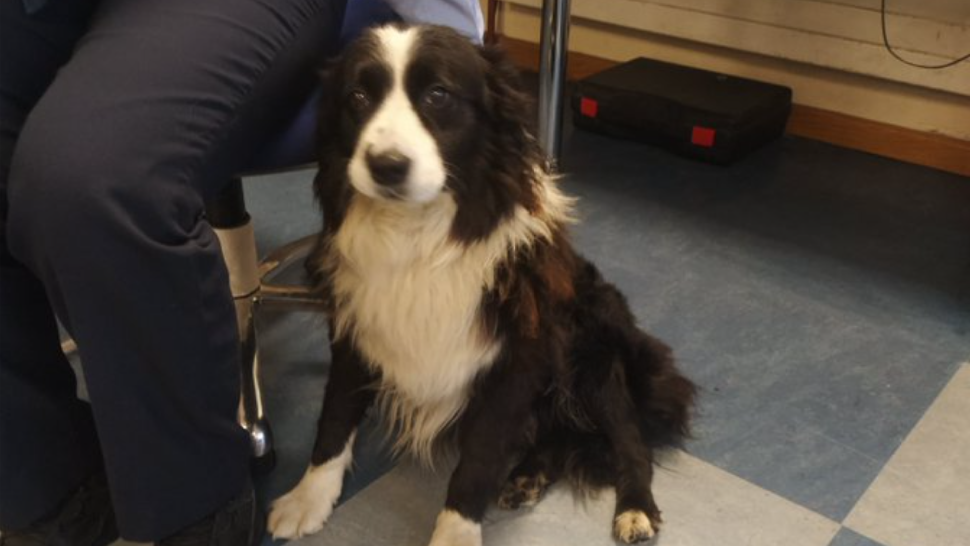 The 'friendly fella' was found on the M50 yesterday morning (Image: An Garda Síochána)

The pup is now having a 'pawsome' time hanging out at Store Street Garda Station, where he posed for a photograph alongside one of the rescuing officers.

"This friendly fella was found on the M50 this morning by Gardaí," a spokesperson wrote in an appeal on social media.

"The dog is currently Store Street Garda station and we are hoping to reunite them with their owner."

This friendly fella was found on the M50 this morning by Gardaí. The dog is currently Store Street Garda station and we are hoping to reunite them with their owner. pic.twitter.com/exWusOVfHs

Store Street station has a number of kennels and works with local charities to help rehome unclaimed dogs, a fact which was reassuring to those who commented underneath the appeal worried the pup would be sent to a pound if he was not reunited with his owners.

Many others offered their own home to the 'friendly fella' should his family not be found, either for fostering or for a new forever home.

Others still praised the gardaí at Store Street for looking out for abandoned or lost pets, with one person writing "Thank you yet again to the amazing [Store Street Gardaí] who go above and beyond always for animals. They are a credit to the force".

Here's hoping the handsome pup will be reunited with his family soon-- but either way, he's in good hands.