AN ENORMOUS arctic walrus has washed up on an Irish island hundreds of miles away from home.

Yesterday, a father and daughter out for a walk on Valentia Island off the coast of Kerry came across a very rare sight indeed-- a large arctic walrus.

Alan Houlihan contacted the Irish Whales and Dolphins Group after his five-year-old daughter Muireann spotted the enormous beast resting on the rocks on the beach on Valentia Island, and the arrival of the arctic traveller has caused a huge stir.

The IWDG believe the walrus-- who is estimated to be a whopping 2m in size-- is a young adult, but they cannot determine the sex due to both male and female walruses sporting tusks. 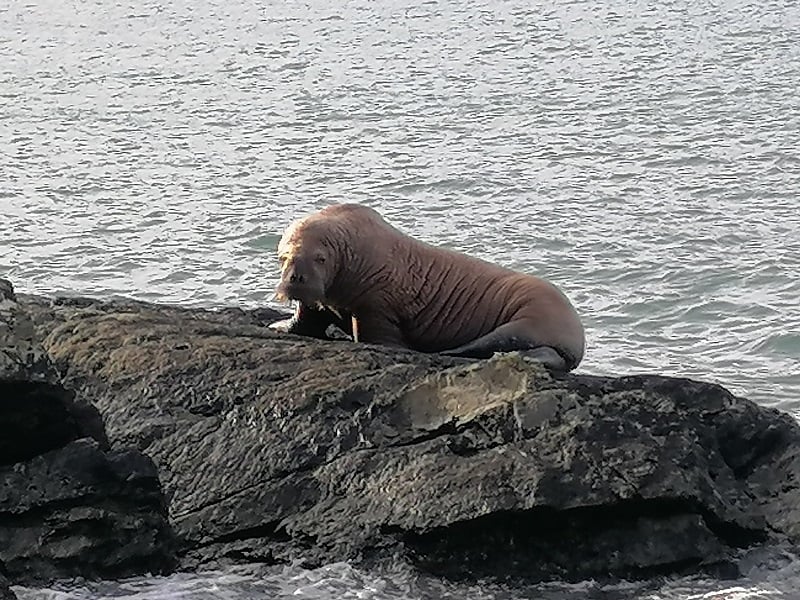 The appearance of a walrus in Irish waters is exceedingly rare, with less than 20 confirmed sightings over the past several centuries-- the IWDG have said this specimen may be the same creature who was spotted in the waters off Denmark in mid-February this year.

Marine biologist Kevin Flannery told The Irish Examiner he believes the walrus could have fallen asleep on an iceberg which carried it across the Atlantic ocean before it eventually arrived on Valentia Island on the west coast of Ireland.

Exhausted Arctic walrus spotted on Valentia Island #Kerry today far,far from home. Rare but not unusual sight by all accounts - first official walrus sighting here on the Shannon in 1897. (Footage thanks to Seánie Murphy/Valentia) @RTEnews pic.twitter.com/yrdQR1Ibam

The enormous creature appeared to be exhausted as it rested on the rocks on the Valentia Island beach, and experts have wanred the public to keep a good distance if they are visiting.

A spokesperson for the Irish Whales and Dolphin Group urged members of the public who are lucky enough to be within the 5km of the beach, and who would like to see the walrus, to "observe this wayward traveler from a safe distance and to give it the space it requires".

Any further sightings should be reported to the IWDG website (here) for validation.